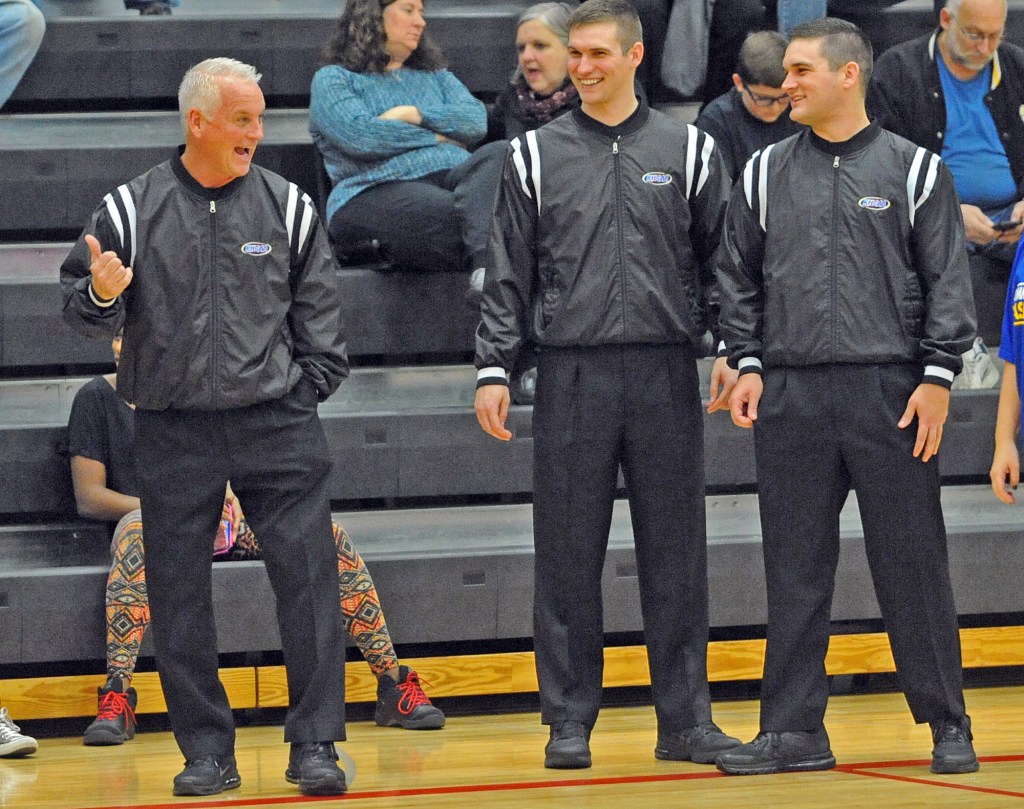 Matt Overing/matthew.overing@amnews.com From left, Scott, Blake and Kyle Bottoms share a moment before a varsity high school basketball game at West Jessamine on Monday. It was Blake's first varsity game and Scott's first since 2014.

More than 150 basketball games in Kentucky were officiated by a member of the Bottoms’ family last year.

This year, there will be more.

Brothers Kyle and Blake Bottoms were joined on the court by their stepbrother Chad Young for a junior varsity basketball game at West Jessamine on Monday. It was Young’s first JV game. For the varsity game, their father, Scott, came back after a three-year hiatus to ref with Blake on Blake’s first varsity game.

The Bottoms’ name is well-known around the 12th Region. Scott is the assigning secretary for referees in the 12th Region and Kyle has been working games since 2009 — his first was a game in Casey County, worked with his father.

Scott refereed for 25 years, a run that included seven state tournaments and six boys’ basketball state tournament championships. He finished his refereeing in the state tournament in 2014. He and Kyle have refereed nearly every level, from middle school to Division I. But there’s only one game he’d come back out onto the court for.

“They don’t get much better than this,” Scott said. “I’m coming back one game to work with these two. It’s a day of firsts, Chad’s first JV game, Blake’s first varsity game.

“I’m going to try to labor my way through one game,” he laughed. 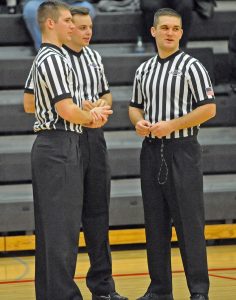 Kyle, Blake and Chad all graduated from Boyle County High School. Kyle knew he wanted to get into refereeing, with that varsity game in 2009 followed just two years later by his first college game at Kentucky Christian in 2011.

“If it’s something for you, it’s almost addicting,” Kyle said. “You get out there and you don’t mind the pressure, the heat of the moment — there’s nothing better than working the big district rivalry game. It really is the only thing I can still do and compete. I can coach, but I don’t compete. In refereeing, I’m competing with myself.

“A lot of these guys we work with, we give each other a hard time if we think we missed a call or something. And if you can take that, you really do learn from it. If someone is honest with you and tells you, you can compete and make yourself better in this business.”

For Blake, it was different. He went to Eastern Kentucky University then Campbellsville to play baseball and didn’t expect to referee. 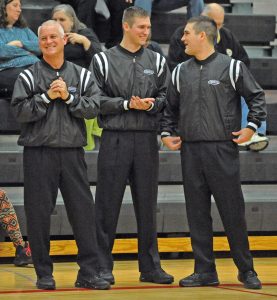 “I told them, ‘I’ll never referee; this isn’t for me, I’m not like you guys,’” he said. “I do it my first year, middle school, and I still wasn’t sure if it was for me. Then I come back for my second year, and like Kyle said, it’s our sport now because you’re not playing sports. It’s addicting. They have done it, and I want to be better than anyone else, especially my big brother.”

The season starts for Blake and Kyle during August with middle school girls’ basketball.

“We started doing that when he first got into it to kind of get him on the floor, but I always like going out there to knock the rust off and start the season sharp,” Kyle said. “You see a lot of stuff in girls’ middle school that you may not see in other games. We do that every year.”

Blake said he’ll take any opportunity he can to get out on the court.

“I try to take as many chances as I can get out there to learn anything, because I’m way behind these guys in terms of officials’ experience, so anything I can do to get out on the floor, I go do it,” he said.

Refereeing isn’t for everyone, Scott was quick to point out. Even if someone can spot every missed call on TV from the couch, doing it in real-time is a completely different animal.

“You can go to our meetings, you can get in the rulebook, you can watch games on TV, you can go watch a middle school game, but until you get out there and you think, ‘this is a real game, this means something to both teams, what we do has an affect on the outcome,’ it’s totally different,” Kyle said. “You’ve got to get out there and work, see plays and be involved. But until you do it, it’s totally different.”

Reasons for refereeing are different for everyone, but the family all agreed: Getting out on the court and refereeing has loads of benefits, none more than being around student-athletes.

“The main reason why we do it, we love being around the kids,” Blake said. “The cool thing, doing it in middle school, seeing kids who can’t play and then they come to the high school level and they’re great. That’s something cool to see, see them grow up.”

In his time as a ref, Scott said he has created lasting bonds with his co-workers — some of whom made the trip to West Jessamine for Blake’s first game.

“I’ve made some of my best friends through officiating games with them and riding up and down the road, learning about their families, how their jobs are going,” Scott said. “To me — and use this term loosely with the guys — it’s a fraternity. You do it because you have a passion for the game. Like they said, it’s not for everybody. But it just kind of gets in your blood. I’ve coached, I’ve played, and it’s just a passion.”

Passing that passion on to his sons is an added bonus.

“The three of us working together, that’s just really cool,” Kyle said.