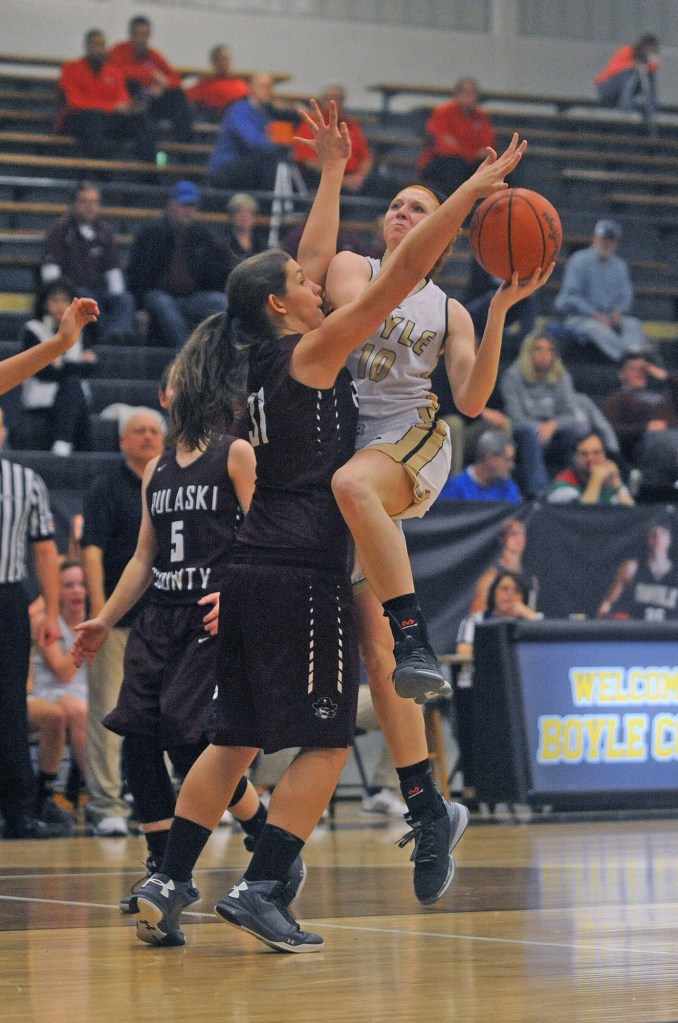 It’s hard for Greg Edwards to believe Emmie Harris is playing her sixth and final season for the Boyle County girls basketball team. And in that time, Harris has been nothing short of superb for the Rebels. Last year, she helped the Rebels to 22 wins while averaging 21.4 points and 4.3 rebounds, both career bests.

“I’m looking forward to seeing how she finishes up her career,” Edwards said. “I know she’s had a great career to this point, and hopefully she’ll add to that legacy she already has here.”

Harris will lead an intriguing group of experienced returners and talented newcomers into the new season, which opens Tuesday with a home game against Corbin.

As everyone knows, Harris’ talent doesn’t only show through on the basketball court. She’s a key member of the successful Rebels soccer team, and she helped lead the track and field team to a Class 2A state title last year.

“Her leadership abilities, the fact she’s been there, done that so many times for us, coaches can lean on her and the rest of her teammates can lean on her because they know she’s been through the wars,” Edwards said. “A lot of times when they’re looking to her, she’s going to tell them the right thing to do, so it’s like having an extra coach on the floor.”

For those efforts, Harris is the two-time Female Athlete of the Year in the area. But it’s not just her athletic abilities on the court which set Harris apart.

“Not only is she a great athlete, she’s a great person overall, and that makes it even better,” Edwards said. “If you just watch her and watch the way she carries herself not just around our team but around the whole school, you’d never picture her being someone that has all these great attributes on the athletic field.”

It’s not only Harris using her talents in different sports, though. Many of the players on the basketball roster are also standouts with the soccer, softball and track teams. The success those players see in each sport definitely carries over into other seasons.

“It may be different sports, but they’ve been in those situations before,” Edwards said. “When things are tough and you have to fight through, they’ve already done that. In any sport, and basketball in particular is mental and just getting over the mental hurdles, they’ve done that. They know how to do that.”

With three starters back, the Rebels won’t only count on Harris. Joining her in the backcourt will be Danielle Roney, who has won the last two team MVP awards; Gracie Edmiston provides size and experience in the post; and McKayla Baker returns after playing in all 29 games and averaging 3.0 points and 1.4 rebounds.

Roney returns after leading the team with 7.9 rebounds last year as a sophomore, and she’s on pace to finish her career as the leading rebounder in program history.

“All the little things that you look in the box score when the game is over or you watch film and say, ‘Golly, she’s getting a lot done,’ so yeah, she’s kind of the unsung hero for us,” Edwards said of Roney.

The combination of Edmiston and Becca Tarter give Boyle a size combo in the post most teams in the area can’t match. Edmiston put up 9.1 points and 4.8 rebounds while Tarter added 3.5 points and 4.1 boards. The duo shot over 51 percent from the floor as well.

Three transfers will also make a difference for Boyle this year. Rachael Leeth transferred in from Mercer County while sisters Alee and Madelyn Inman both came in from Danville Christian Academy.

“I think by Christmas they’ll be able to definitely help us once they learn what we’re doing,” Edwards said.

“We could have a deep bench. The thing is … one through nine, we’re probably better than if we go one through five,” he added. “The strength of our team is we can play some people and rotate some people in.”

They’ll need that depth as the Rebels have another grueling schedule. Edwards said as teams have dropped off their schedule, the Rebels have had to find replacements, and those have all been top-tier teams such as Owensboro Catholic, Harlan County and North Bullitt.

They’ll also play in the Tradition Bank Holiday Classic at Lexington Catholic, where there are seven top-15 teams in the state in the field, and the Elite Insurance Solutions Lady Lions Classic at Garrard County over Christmas break.

“The girls are going to be hating me by Christmas,” Edwards said. “We looked it up and nearly every team on our schedule is ranked either first or second in their region, and that’s not counting our district and region teams on our schedule. It’s going to be a challenging schedule. I wanted to get some tough games, but I wasn’t counting on getting all the tough ones we had.”

Then when coming back from the holidays, Boyle opens 2017 with three straight road games — at Southwestern and Anderson County sandwiched around the 45th District opener at Garrard County.

“Hopefully by the time district rolls around, we’ll have seen every basketball team that plays every style of play, so hopefully that helps us,” Edwards said.

Last year’s loss to Danville in the district tournament prevented the Rebels from making their fourth straight 12th Region tournament.

But with Harris leading the charge in her final trip through area gymnasiums, Edwards and the Rebels aren’t counting on too long of a break from the region.