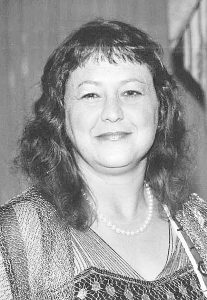 She was a member of Willow Grove Baptist Church where she served as a Sunday School and children’s church teacher. Violet was a member of the National Society of the Daughters of the American Revolution. She was a former Lincoln County Deputy Sheriff from 1984 under Sheriff John Sims, and then from 1986 until 1992 under Sheriff Earl Dean McWhorter. She also was a deputy jailer under Jailer Don Dawson.

In 1993, she worked as a deputy clerk under Clerk Bill Folger. She had also served as office manager from 1994-95 for Ashland Oil in Harrodsburg for Paul Lasure.

When her husband and best friend started Smith Electric Source, she was his secretary until the time of her passing. Violet loved her family and enjoyed going on trips to the Smokey Mountains of Gatlinburg, Tennessee.

Survivors include her husband of 29 years, David Smith of Stanford;

In addition to her father, she was preceded in death by one sister, Kathy Carrier.

McKnight Funeral Home is in charge of arrangements.