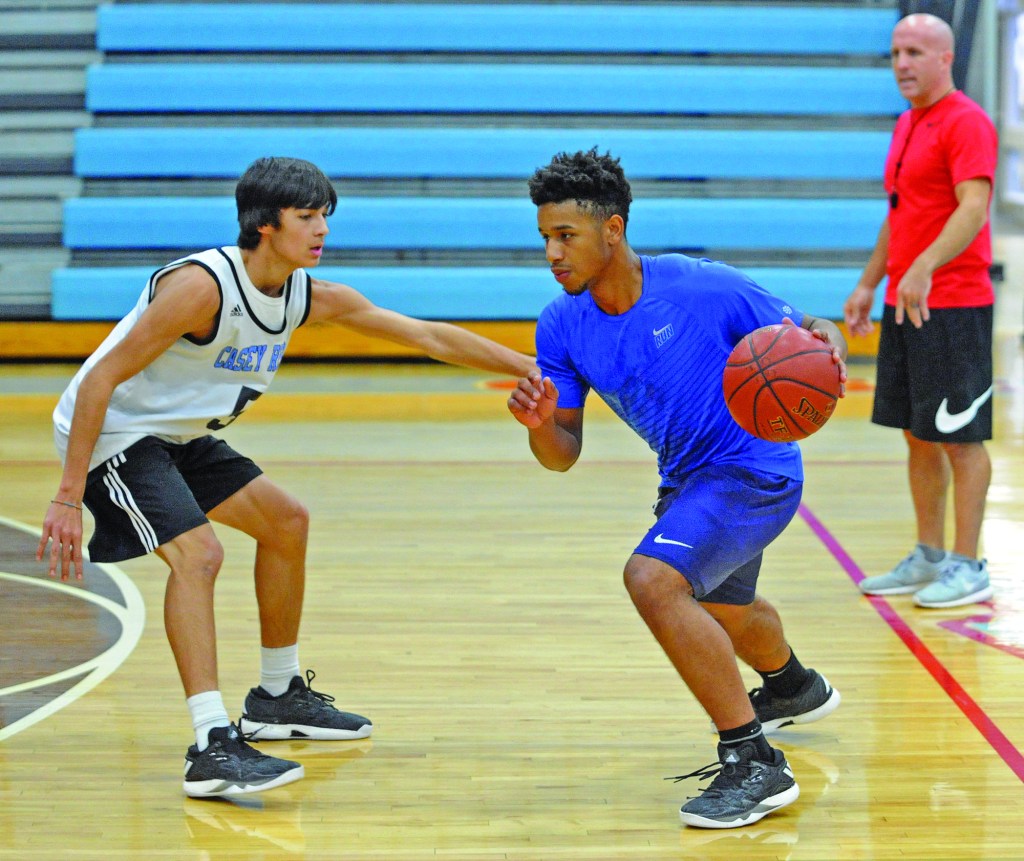 Matt Overing/matthew.overing@amnews.com Max Reyes is one of the most explosive players in the open court on the Casey County team, head coach Jason Price said. Reyes averaged 6.3 points per game last season.

Jason Price is hoping Casey County’s football success will carry over to the basketball court.

“I think that this group in general, they’ve tasted what victory feels like,” Price said. “They’re used to winning, they expect to be winners and do well. Even though we didn’t have a winning record last year under coach Maze Stallworth, getting to the finals of the region was a great accomplishment. They know what it takes to get where we’re wanting to go.”

Despite a stellar run to end lasts season, the Rebels are still off of the radar for most teams in the state. Preseason polls have them ranked in the middle of the pack in the 12th Region, and Price said that’s not a problem for him or his team.

“Me being from Casey County, growing up here, I’ve always kind of felt like that’s how we’ve been viewed anyway,” he said. “We’re the underdog, we have to go out every game and prove how good we are, how good we can be. I think these guys understand that, they don’t look into the preseason rankings. We weren’t picked to do anything. We’ll be the underdog, we’re fine with that.”

Where the Rebels have a bit less depth is down low. They graduated Wyatt Sloan and DJ White, two of the top rebounders on the team.

“They brought a lot of the underneath, inside game,” Smith said. “I think this year’s team is going to have to go about being fast, I think we’ll be fast, get up the floor really well and we’ll be able to shoot the ball. We’ve got experience in Breece (Hayes), and he’ll bring a lot to the table in terms of rebounding and post play.”

Hayes and fellow footballer Dustin Richards will likely anchor the paint for the Rebels this season. Smith and Miller will be joined by dynamic guard Max Reyes on the perimeter.

“They’re quick, they shoot it well and they’re hard to stay in front of,” Price said of his guards. “They’re all a little different. Collin is so explosive, Jake is a great shooter, great pull-up jumper, and Max is devastating in the open court. They all kind of have their own skill set. It’s complemented well when you bring someone like Breece and Dustin, they’re both big boys and that helps those guards.”

Price’s new system will take time to implement — evident in the team’s 70-56 loss at Clinton County on Tuesday — particularly after the football team’s deep run.

“I’ve only had my football players for five practices. But they’re coming along, I’m throwing a lot at them, new system, new way of doing things,” Price said. “So they’re learning as fast as they can. We may not be able to do everything we want to do game one, but we want to be better in two, three, four weeks than we are right now. Main thing I’m looking for is I want them to compete, play hard, play at the pace I want them to play at.”

“Breece and Collin, they’re just two great competitors and good athletes,” he said. “We’ve been playing together for a long time. They bring that competitive nature, they’re good to be around and are just good teammates.”

Keeping that in mind is something that will be vital to the team this year, Smith said. He said his teammates have to trust each other on each possession.

Price said for the team to have a repeat shot at the 12th Region title, it will take a full effort on defense.

“I think the number one thing is defense,” he said. “If we guard, if I get them to buy into how we want to guard and we hang our hat on defense, that’s where everything is started. I want to score as much as we can, but if we can get them to guard and play like a team, play for each other, that’s the main thing.

“We have a lot of goals, and I think we have the talent to do some good things, we’ve just got to go out there and prove it.”