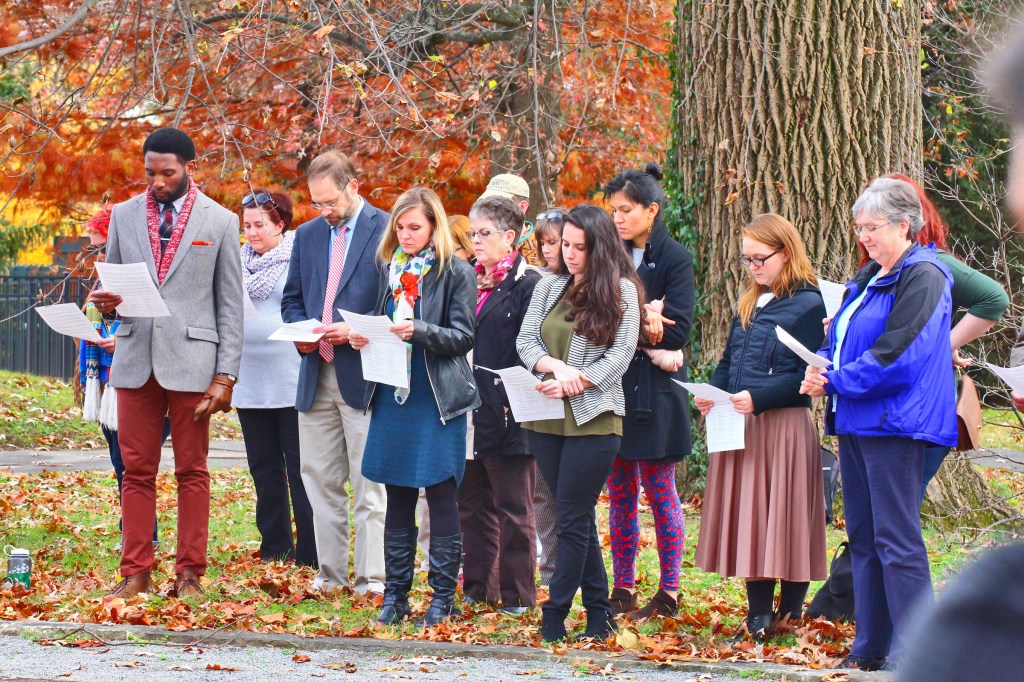 Photos by Ben Kleppinger/ben.kleppinger@amnews.com Members of the Centre College community gather for a post-election prayer vigil at the labyrinth memorial Tuesday afternoon.

Around 80 people gathered at the labyrinth memorial on the edge of Centre College’s campus Tuesday for a post-election prayer vigil.

“We gather today at a time of division in our world, in our country and in our community,” said Rick Axtell, the college’s chaplain who led the service, held during the last week of classes before final examinations.

The vigil was held to bring people together after a hostile presidential campaign, but it was “not an attempt to gloss over our differences,” Axtell said. Conversations should not be avoided because they make people uncomfortable; instead, people should listen to all arguments and consider opposing viewpoints, he said.

“That may not be the pattern of our culture over the last year, but here we do things differently,” he said.

Representatives for five different faiths — Christianity, Hinduism, Judaism, Islam and Buddhism — offered readings and prayers during the gathering. Musician Nathan Link performed a song titled “Fragile” and professors Matthew Hallock and Aaron Godlaski read a statement from members of the faculty and staff on inclusion.

“This election cycle has been rancorous and divisive. If you are among the many people who feel marginalized, threatened and uncertain of their place in the American society, we want you to know that we hear you,” Hallock said.

Centre has always been against discrimination of all kinds, Hallock continued.

Godlaski continued the statement, saying that Centre professors will aim to serve all of their students equally.

“As we prepare students for lives of leadership, we will lead by example,” he said. “We will lead our students to the walls built by oppression and ignorance and by their side tear them down, brick by brick.”

Centre College President John Roush spoke near the end of the service, reading a pledge adopted by the college in 2000 and reaffirmed in 2015 that promises to create a “community enriched by our differences and founded upon our common humanity.”

Photos by Ben Kleppinger/ben.kleppinger@amnews.com Members of the Centre College community gather for a post-election prayer vigil at the labyrinth memorial Tuesday afternoon.

(Order prints of photos from the event here)