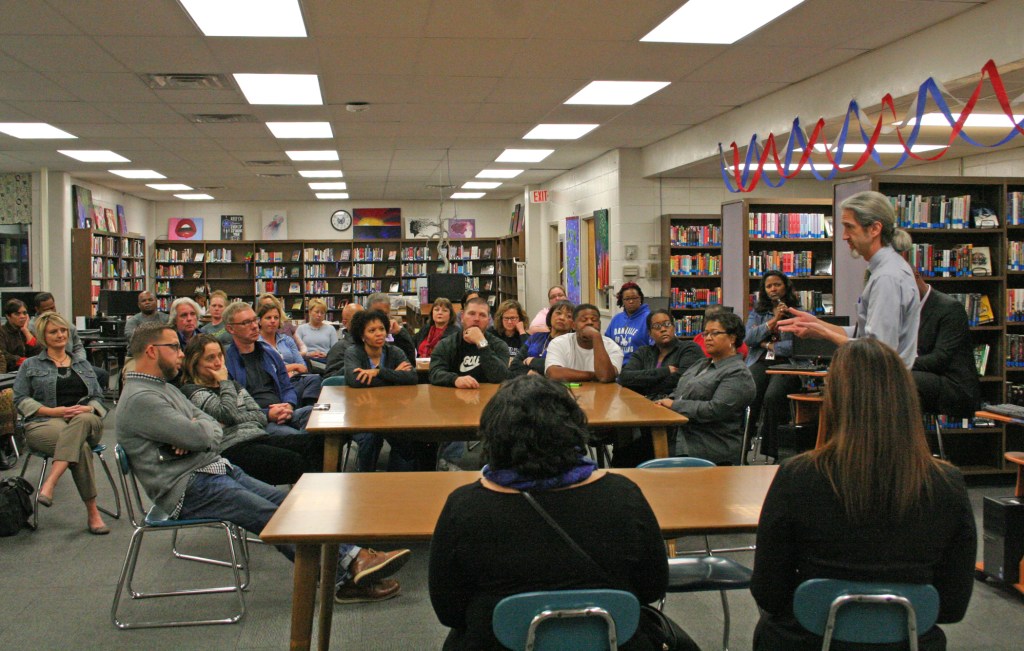 Last week, Superintendent Keith Look sent out a letter announcing that Principal Catherine Slack would be moving to a different position in the district and Assistant Principal Haley Springate-Ralston had taken over.

Look started Tuesday’s informational meeting by telling parents and community members that the “hardest decisions” to make sometimes are those that are made by putting students first.

“That’s my primary role … Making sure that I get up every day and go to bed every day knowing that every decision that I have made is putting the students at the forefront,” Look said.

He was quick to correct the rumor that Slack had left the district. Instead, Look said, she was being moved to a position in the district that was more “suited” to her strengths.

“We have to get the right people on the bus and in the right seats,” Look said.

After some urging by parents, Look said Slack is moving to the central office. She will be trained by Grants Administrator Kathy Belcher, with plans for her to take over following Belcher’s retirement later this year.

Look assured parents that the work done by Belcher to date would not stop in her absence.

“The torch will pass,” Look said.

Look appointed Ralston interim principal, which he said is all he has the power to do at this point. Ralston is the high school’s fourth principal in less than two years. The high school has had three assistant principals over about the same time period and the position is currently not filled.

“That’s not a trajectory we wish to continue,” Look said.

Win Smith, a former Danville High School principal, was appointed as interim principal following Etherington’s departure from the district. According to a July 2015 article, Smith was appointed interim because “a new principal would have much great success, fulfillment and longevity taking the reins in 2016-17.” Melissa Rogers was to fill the assistant principal role. That was Look’s first year in the district.

In May 2016, Catherine Slack was named the principal at the high school for the fall term, while Smith remained on as principal.

On Nov. 21, Ralston was appointed effective immediately to the principal position, vacating the office of assistant principal.

J.H. Atkins, a retired Centre College professor and former Toliver Elementary School principal, will step into an advisory role for students on a temporary, part-time basis as part of the transition, Look announced. While Atkins won’t formally be an assistant principal, he will help fill that void, Look said.

“This is a good opportunity for you all. I assume it’s going to be a good opportunity for me, as well,” Atkins, who also serves on Danville City Commission, said to parents. “I’m not looking to stay … there are a lot of other things that I could be doing, but I think it’s important for stability at the Danville High School and I know I could do that.”

Atkins said the council will have time to start the search again.

Look said he was confident there would not be a gap in student help thanks to the coordination of Atkins, Smith, Ralston, the school’s two counselors and the family resource center director.

That was a cause of concern for parents, who felt one person should be wholly dedicated to the assistant principal position. But to do so, Look said, would cause a shift in the classroom, pulling an existing teacher out to a temporary administrative role. That, he said, would have a bigger negative impact on students directly.

Look said he was confident in the ability of the faculty and staff to keep the school moving forward and especially in the abilities of Ralston.

“I have all confidence in Haley Ralston,” he said, explaining that her knowledge of the school district, the students, the state requirements and the culture of the school all made her more than qualified to do the job — he was met with heads nodding in agreement from parents and faculty around the room.

Jarnigan assured parents of how much their students cared for Ralston.

“They were chanting her name at the last football game,” she said. “They love her.”

Some parents asked why she couldn’t be permanently placed as principal. That, Look said, would be up to Ralston, if she applied, and to the school council to decide. In many instances, he admitted, interims have a harder time making the transition to permanent positions.

Parents asked about the hiring process that led to the school choosing Slack; why someone from out of state was brought in to lead the school; and what will be different about next time.

Look said the high school’s site-based decision-making council is an essential part of the process. The council consists of two parent volunteers, two teachers and the principal. Parent volunteers are selected each year by a vote of all parents at the school. When searching for a new principal, Look steps in, taking the principal’s place on the council.

This, said Danville Board of Education member Paige Matthews, is why it is so important for parents to vote when the site-based decision-making council parent elections are held.

The council took a survey of staff to learn what was most important to them before the process began. Potential candidates were interviewed and narrowed, until eventually the council found the person they believed was best suited for the job.

Kay Anderson, a member of the site-based decision-making council spoke in defense of the council, and said members took the decision “very seriously.”

When hiring processes begin, the council is given training to help them understand the whole procedure, so that all are given the information to do so.

“I’m not sure we had a failure,” Anderson said. “But I guarantee you, Haley is a stellar principal, and one who will do the best she can to move us forward.”

“I think, unequivocally, that the site-based hired the best candidate,” Anderson said.

Some parents asked why Stanfield, the assistant principal under Aaron Etherington who left around the same time, was not considered for the principal position.

It is unknown if Stanfield applied for the principal position when it became available, but he had expressed interest in potentially returning to the district someday. He now holds a position as a parent volunteer on the high school’s site-based decision-making council.

Look pointed out that Stanfield’s departure came prior to his arrival at the district, and he could not shed light on that.

Stanfield said that he would do what is necessary to ensure that the right candidate is selected this time.

“I have been here. I know what it would take. … They will have to have done their homework,” Stanfield said.

Parents encouraged Look and others to ask the students what they want in a new principal and in the administration as a whole.

Look said that he wasn’t sure of the time frame for hiring a new principal and said the school has a lot of “work to do” to get back to where everyone wants it to be. He was confident it could happen.

“Danville High School has been through a lot. We all know that. Every day we are not operating at our top efficiency is a day our students are losing out,” Look said.

“The one place that most accurately represents who and what we are is what you see on the gridiron, that we’re lucky enough to play in the state championship this week. That is not to be the exception. That is to be the rule, not just on the field but more importantly in the classroom, in the hallways, in the alumni, in the middle school and everywhere else in the Danville Schools.”