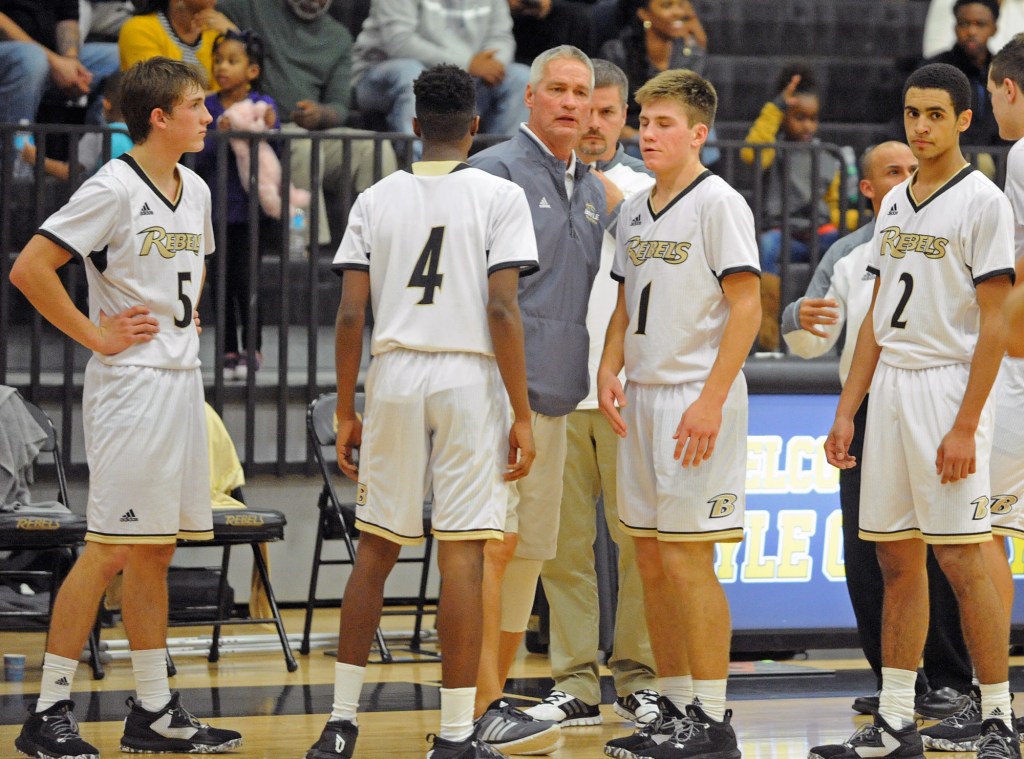 Game number one looked like just that for Boyle County on Tuesday against Bryan Station.

The Rebels came out with enthusiasm but struggled down the stretch in a 60-56 loss after holding a 47-40 lead at the start of the fourth quarter.

Coach Steve Adams said it was a tough loss but there were plenty of positives to take from his team’s first game of the season.

“After our practice yesterday, I went home last night and I thought we’d get beat by 40,” he said. “We started two kids tonight that had never played a high school game. We’ve not learned who we are yet. We’ve had some of the kids for two weeks. So we’re nowhere near the team we’re going to be, I hope. But the kids played really, really hard.”

Bramel looked strong offensively early, scoring nine points on 4-of-6 shooting in the first half. Slone also had a strong start, scoring 10 points in the first 16 minutes. At halftime, Bramel and Slone had led the Rebels to a 29-27 lead.

“Will Bramel is a great positive,” Slone said. “Whenever we get it to him in the post, we know he’s going to be able to find the open man or put up a nice shot. That’s great to have a big body down there, we can just give him the ball and he can do something good with it.”

But Station slowed the game down in the third after taking a 40-35 lead. The Defenders held the ball near midcourt with just under four minutes left on the clock. Boyle was content with a five-point deficit, and neither team scored for a three-minute stretch.

But as the quarter came to a close, Bryan Station missed a layup and Slone scored a running 3-pointer from the right side to cut the Defenders’ lead to 40-38 entering the fourth quarter.

Boyle continued its run into the fourth, scoring nine straight points to take a 47-40 lead. That capped a 14-0 run for the Rebels.

Station responded, scoring 14-straight points of its own in the fourth quarter.

“We made some bad decisions, but a lot of that was putting people in positions that they weren’t comfortable in,” Adams said. “And we’ve got to be smarter than that, we’ve got to be a smarter basketball team. But the kids played hard, and they put themselves in a chance to win.”

The Rebels’ offense struggled during Station’s run, but it wasn’t turnovers that doomed the hosts: Boyle had just four in the fourth quarter and eight in the second half. It was a stagnant offense, and Station’s pressure forced the ball outside instead of inside to Bramel’s hot hand. He had just two points in the second half, finishing with 11 points on 5-of-8 shooting.

“Will is going to do nothing but get better,” Adams said. “He’s not even in basketball shape. We’ve got two pretty good athletes who didn’t play tonight because they’re two freshmen that just don’t really know what we’re doing yet. In that close of a game, I didn’t want to put them in that position. That will help us as they learn.”

Slone said he and Alexander need to step up when the intensity is high late in the game to help their inexperienced teammates.

“I know me and Baby J (Alexander) have got to take control better, instead of letting the younger guys try to handle the ball when we’re under a lot of pressure,” he said. “Our leadership has to step up. Defensively, just like we said before, whenever we let people get by us, we don’t have Colton (Elkins) back there. We’ve got to be better with on-ball defense. We’ve all got to do that. And we’ve got to knock down shots.”

Adams said those two guards are the key to unlocking Boyle’s offense.

“Baby J and Bryce have to show their maturity and their experience and make better decisions,” he said. “We put a lot of pressure on them and expect a lot of them. They’re going to have to be the ones that know who needs to have the ball, when and where and how. But we’ll get there. I’m disappointed that we lost because we had a good chance to win, but I’m very proud of our effort and our fight and the potential that we showed.”