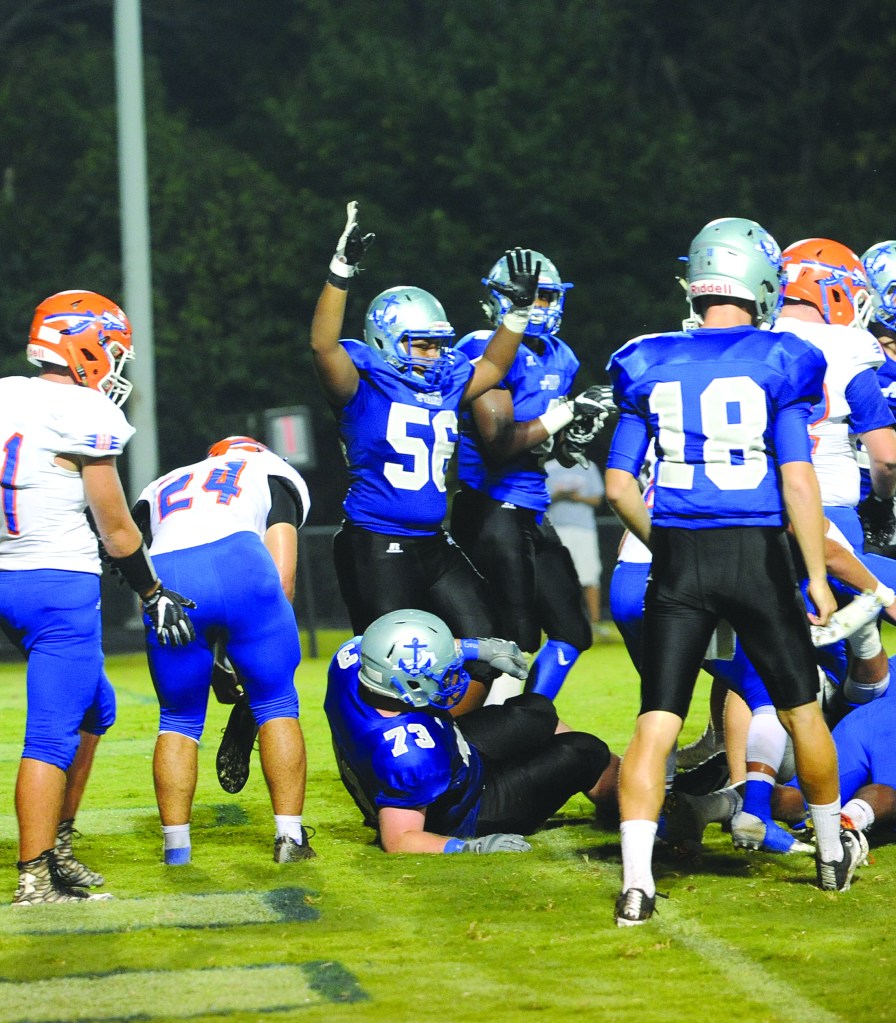 Jeremy Schneider/jeremy.schneider@amnews.com Danville lineman Kishown Bartleson singles for the touchdown after Dmauriae VanCleave scored on a 1-yard run in the first quarter of Friday's 35-34 win over Southwestern.

The great thing about having five senior offensive linemen is pretty obvious. But the disadvantage will become painfully apparent the following season.

Perhaps because of those concerns at the end of last year, the adjustment to a brand new starting line hasn’t been the issue many had feared it would be for Danville.

“The group has shown they’re willing to work,” Clevenger said. “A lot of those sophomores and those guys were in here early in January when they were still sophomores. They worked really, really hard in the weight room.

Now the improvement of those linemen, across the defensive and offensive fronts, has the Admirals playing for a Class 2A state title against Christian Academy (Louisville) at 1:30 p.m. Sunday at Western Kentucky University.

Of the nine linemen who’ve played in at least 13 of the 14 games on offense or defense, Kishown Bartleson, Jaylon Brashear, Pierce Haines, Ryan Jackson, Chase McQueary and Isiah Singleton are all sophomores. That leaves junior Hayden Graves, Christian Hill and Shawn Martinez as the old timers of the group.

Hill went from one of the youngest players on the defense to one of the oldest. He had 73 tackles and one fumble recovery this year. 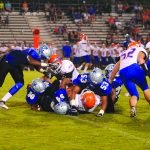 “I knew we were going to be a young team, so I was pushing them in practice,” Hill said. “They all adapted to it very well.”

With 45 players on the varsity roster, the Ads (12-2) don’t have the luxury of playing platoons on each side of the ball, meaning the linemen are expected to play both offense and defense. Clevenger credited coaches Ernest Dunn and J.R. Dean for their work with the line. Each practice, the linemen and coaches will go off to their corner of the practice area while the rest of the team goes through its drills. That time has built relationships and trust between the players, something Brashear said has been vital to their success.

“It all drops down to trust, we have to have trust in one another,” he said. “Being down there since spring, it was something we had to get used to. You’ve got to get comfortable being uncomfortable. It’s a matter of how bad you want it.”

Brashear and Hill said the loss to Corbin in Week 3 was the wake up call the team — and the line in particular — needed.

“At the beginning of the year, we were living off Team 104, but after the loss to Corbin, we started building our own identity,” Brashear said. “We weren’t known as the kids from last year, we were Team 105 now. We had to be a different breed of an Admiral.”

Those new linemen have paved the way for the Ads to rush for 1,671 yards this year, averaging over five yards per rush. Donlevy Harris, also a new starter at running back, has 1,252 yards and 19 touchdowns.

“To step up and play the way these guys have been playing is tremendous,” Danville assistant coach and Turner said. “I don’t know if Don gives them enough credit for allowing him to do what he’s done. Being a running back, you go as far as your line will take you.”

And Turner would know — his name is plastered all over the KHSAA record books for his time as an Admirals running back.

“It goes back to our offseason workouts, and at the end of last year, those sophomores know it’s my time now, I’ve got to step up my work up in the offseason, and they did that,” Turner said. “It’s big for those linemen, it’s big for our team, it’s big for Don and Zach (Dampier).”

In Clevenger’s estimation, the line struggled in the first half of last week’s state semifinal against Covington Holy Cross. But at halftime, the line came in and made adjustments, something he admitted they couldn’t have done 13 or 14 weeks ago.

“Kids have to understand what you’re saying before they can execute it, and that just takes experience,” Clevenger said. “Now we say, ‘You’ve got to get your eyes to this gap and check this linebacker,’ now they know what that means because they’ve probably not done it and gotten their rear ends chewed enough times that now it means something to them.”

Whatever it is — offseason workouts or rear-end chewings — it’s worked for the Ads this year. And everyone acknowledged, they wouldn’t be in the position to win a state title if not for the improvements along both lines.