Garage of opportunity: Danville screen-printer providing work, pay to some with disabilities 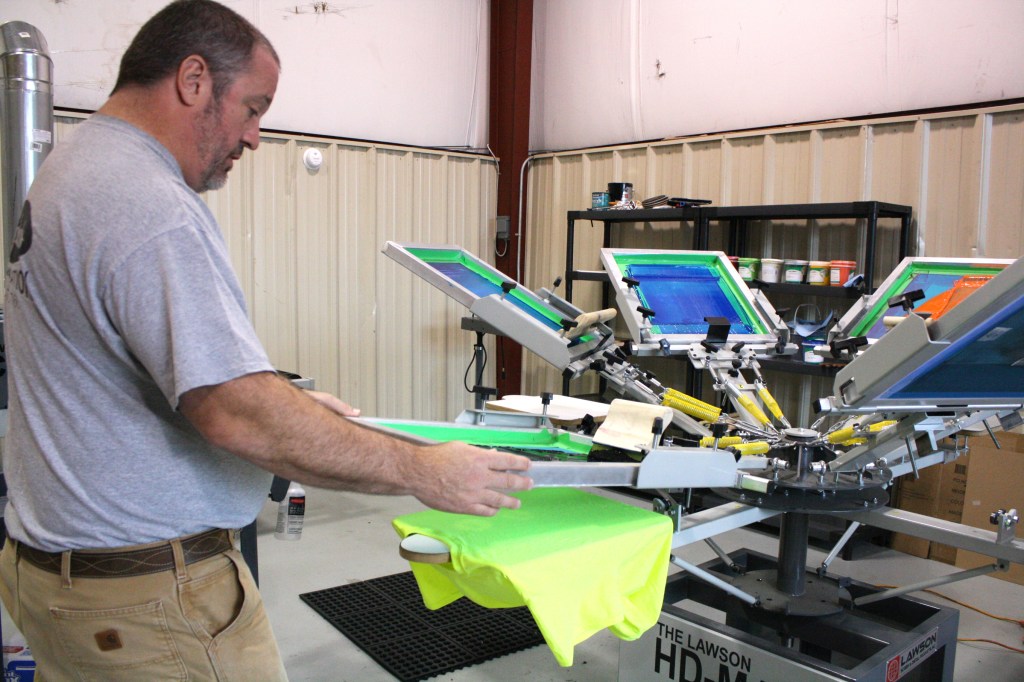 The Shirt Garage, a new Danville business, has made it their goal to help those in the community who have an intellectual or developmental disability fulfill their dream of having a job.

“We started putting this project together in September, and it was available for customers Oct. 15,” manager Steve Bramel said.

The Shirt Garage is partnered with Advocate Homes, a Supports for Community Living Program, located in the same building.

“Advocate Homes provides community access for people with intellectual and developmental disabilities,” Bramel said. “A lot of them have goals of getting jobs, so we work on things like filling out job applications, going through interviews, stuff like that. Let’s face it — it’s really hard for someone with an intellectual and developmental disability to go out and get a job and (be) treated equally and fairly. It’s just hard to do.”

After doing a lot of research and putting thought into the business, Bramel said a screen printing workshop is what worked best.

He said the participants get involved in several ways.

“Whether it’s visiting the customers that come in the front door, interacting with the public or actually being on the press or to just be involved with loading shirts, folding them and getting products or making shipments,” Bramel said. “There’s just a whole lot of self-worth and gratification to get participants back here, get them hands-on, get them touching products and making money.”

The plan is for two participants from Advocate Homes to work a morning shift for about three hours and two others to work a similar shift in the afternoon. The participants will rotate throughout the week, Monday through Friday, he said.

“If I would walk over there … you would be amazed with the number of people that would be wanting to come back over here with me, because they are dying to work,” Bramel said. “It’s really really gratifying — not just the T-shirt production and having happy customers, but the fact that we’re fulfilling goals that they are probably not going to get in any other aspect.”

He said the business is glad to have the participants from Advocate Homes working with them.

“I don’t know how successful we’ll be in the T-shirt business, but I can tell you in the business of life and offering that type of reward, it’s great,” Bramel said. “Whatever business we get, you’re actually doing more than just getting shirts and sweatshirts from us, you’re providing an opportunity for people that have long strived to be hands-on and to have a job.”

People tend to forget that those who have intellectual and developmental disabilities are still people regardless of the daily struggles they have, he said.

“Once you break through that barrier … and really just get to know them and give them a fair shake, it’s really rewarding,” he said.

Bramel said there is a demand for the kind of work environment that he has created at The Shirt Garage.

“I am honored to be a part of a company that can offer that type of atmosphere for people with intellectual and developmental disabilities,” he said.