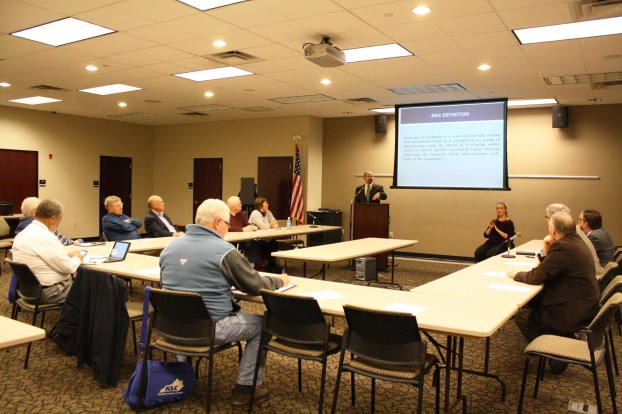 RKG Associates Inc. presents their initial marketing findings from their first visit to Danville in October with the city and county officials.

Kyle Talente and Lauren Callaghan with consulting firm RKG Associates Inc. returned to Danville this week as they presented their initial marketing findings in Boyle County they discovered during their first visit in early October. The firm was hired by the city and the Economic Development Partnership to help develop a new strategic plan.
Thursday night, the city and county came together to hear a presentation given by Callaghan about a variety of data they put together to support their initial marketing findings.
Demographic
Callaghan first presented the demographic analysis, which has increased steadily over the year.
The data Callaghan presented said since 2000, there’s been a steady population growth in Boyle County. Callaghan said there is projected continued growth in Boyle County, but there is a projected decline in surrounding counties.
Due to the potential decline in surrounding areas, it could highly effect Boyle County because of the way the county creates and provides the jobs for them.
Another aspect that affects the workforce in Boyle County is the fact that over the last 16 years, there’s been a growth of people in the area who are 55 and older and there is a decline in those who are between 35 and 54, which is the age group of the working class, Callaghan shared.
Another contributing factor to the workforce in Boyle County is household income.
Callaghan shared data that said Boyle County has a higher household income compared to the surrounding areas, but a majority of the population is somewhere between the 1.5 and 50k and fewer are in the 75k and higher.
Economic
In the area of labor force, Callaghan shared how Boyle County is much smaller, almost 12,000 fewer, compared to surrounding areas.
She said in order for Boyle County to bring in larger companies, the labor force has to increase.
The reason why Boyle County has seen such a drastic decline in labor force participation is because of the recession that occurred in 2006 and the number of residents that are senior citizens and retired, she said.
In their presentation, Callaghan made a few points on the employment trend in Boyle County.
She said employment has steadily decreased since the recession, some of the largest employment sectors in the area are health care, social assistance, manufacturing and the retail trend and non-employer establishments have steadily increased since 2010.
Some implications mentioned were the regional economy has recovered from the recession but the economic fundamentals have changed, education reflects the skill levels within the workforce and having proactive recruitment is an essential aspect to the strategic plan. 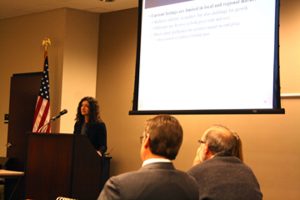 Lauren Callaghan from RKG Associates Inc. presents their initial marketing findings from their first visit to Danville in October with the city and county officials.

Real estate
“There hasn’t been a large amount of development activity,” Callaghan said. “Most of the activity has been office, retail and industry, but there is a limited amount of development activity.”
There have been several planned and proposed development projects recently in Boyle County. According to the presentation, there were 11 new projects and three expansions completed last year. Along with the completed projects, there are still 10 new projects and expansions in the planning and proposal stage, she said. The Implication of the real estate analysis presented, according to Callaghan is there has been a limited amount of new construction development since 2006. However, she said there has been recent and proposed development and expansion activity in Boyle County, but there is a lack of new space available, which limits opportunities for new businesses.
Office and industrial market
In the office inventory, Callaghan said the condition and location of the offices impacts not only the lease rates but the sale prices.
She said the current listings are limited within the local and regional market, which means this reflects the stability in the market but challenges the growth, it offers diversity in their prices and size and the preference of the buyer and renter has an impact on the price of the property.
In the industry market, there has been a decline in vacancy rated since 2011, she said.
She said the implication is the recent demand patterns show how strong the market is for the smaller projects.
Retail and hotel market
“There’s a small amount of area for other retail options,” Talente said.
The condition and location of the retail properties effects the lease rates, just like it does with the office space, Callaghan said.
In the presentation, it stated there is potential to capture additional retail sales with new offerings, the space currently available in Danville is sufficient to the additional retail offerings and there an additional need, either development or rehabilitation, to meet the retail needs in Perryville.
In the hotel market, numbers have increased from 2011 to 2015, Callaghan said.
“In general, this is a small market for business,” she said.
Looking at the numbers monthly, there is an increase in the amount of people who are staying in hotels in October due to the number of activities provided throughout the month in Boyle County, she said.
“The Danville market is seeing an increase in room rates and an increase in revenue per room,” Callaghan said.
“They are raising their rates and people are consuming at a greater level,” Talente said.
Callaghan shared that there is the potential to add additional supply to the hotel market due to the increase in occupancy and revenue per room.
Since there has been such an increase in the numbers with occupancy and revenue per room, it is nearly necessary for Boyle County to add another hotel, which is why the new Holiday Inn Express was brought in, she said.
Next step
Now that RKG has visited Danville, conducted their initial marketing findings and presented their thoughts and opinions, there is still more to be done.
The next steps for RKG are to target the industrial analysis that was presented, conduct a more in-depth real estate analysis and hold more focus group meetings and interviews with people in Danville-Boyle County like they did during this visit.
Talente said they will continue to engage in the community, as this is a long process that still has several months left.
You Might Like

Dry spell over: Plans underway for alcohol sales in Perryville