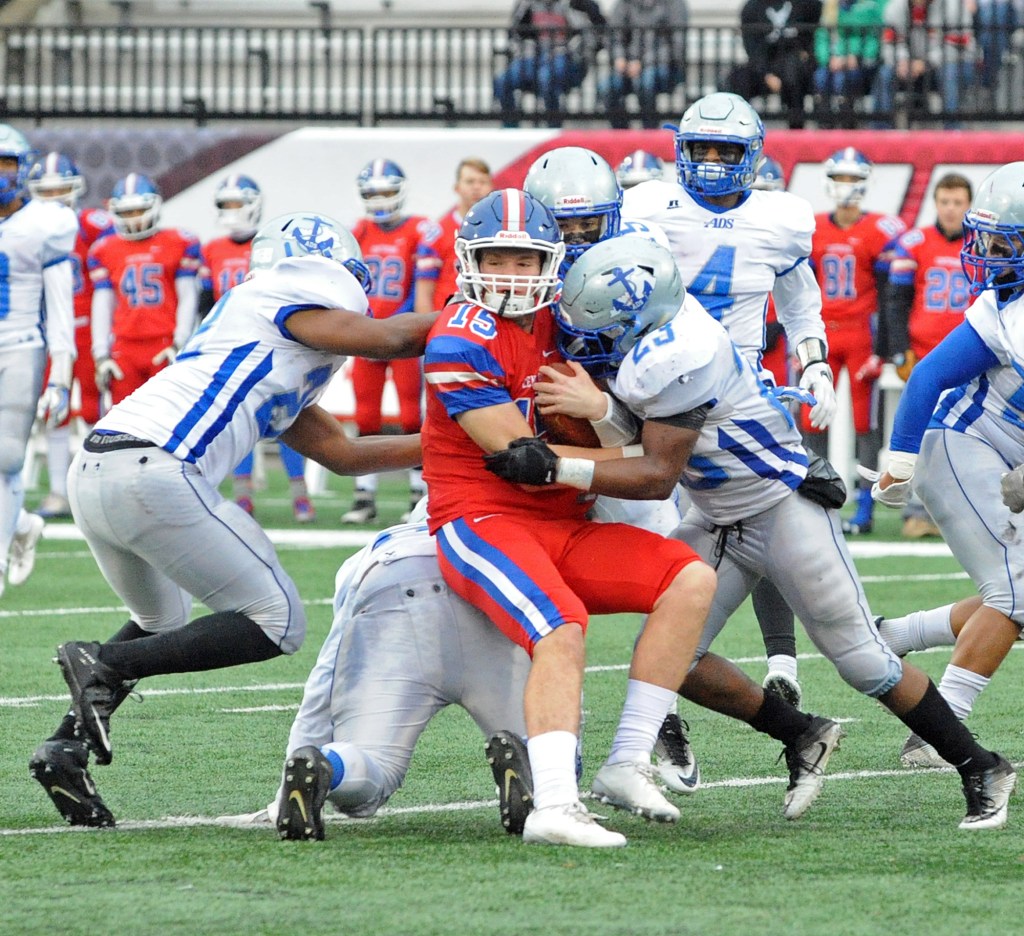 BOWLING GREEN — The day started with Danville trying to do something it hadn’t done in over a decade.

It ended with the Admirals trying to prevent something from happening that hadn’t occurred in nearly the same amount of time.

Danville’s return to the Commonwealth Gridiron Bowl championship game ended on a sour note, with Christian Academy (Louisville) running away from the Ads in a 24-6 win for the Class 2A title Sunday at Western Kentucky University.

The score appears normal from the outside, but how the two teams ended up there was anything but average. The Centurions scored twice on safeties off bad Danville snaps and three of CAL’s five pass completions went for touchdowns.

Meanwhile, the Ads (12-2) were stuck with a goose egg on the scoreboard until late in the fourth quarter, when Zach Dampier connected with Dmauriae VanCleave on a shovel pass and a three-yard TD pass. The Ads hadn’t been shutout of a game since losing to Bardstown on November 18, 2005. 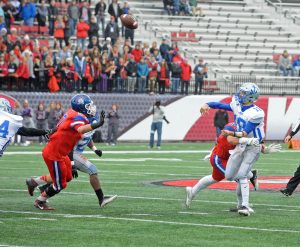 It wasn’t anywhere close to the result or performance Danville wanted in search of its 11th state title in school history, but as Ads coach Clay Clevenger said afterwards, his team simply didn’t make enough plays to keep CAL (14-1) from its first state title.

“You lose 16 seniors last year, you’ve got three seniors this year and you’re playing 19 underclassmen and you get to the state championship,” Clevenger said. “Obviously Zach played a big part in that with his leadership at the quarterback position. He’s a special talent you might not get back, ever really. All in all, he put this team kind of on his back and he carried this team to this point and we weren’t able to make enough plays today to get the championship.”

While the first quarter belonged to the Ads — they outgained CAL 89-41 while running three times as many plays — but the teams remained scoreless after the period. But the Ads moved the ball on the Centurions on the first drive, getting inside the CAL 30-yard line, before a 46-yard field goal attempt barely rose above the ground.

After holding CAL to a three-and-out, the Ads again advanced the ball inside the 30, but Dampier was picked off at the goal line.

That two drives were as good as it would get for Danville until late in the game. In fact, they gained 81 yards on those opening two possessions, nearly one-third of their total yards for the game.

The scoring started early in the second quarter, but it was more Danville’s doing than CAL’s that put the Centurions ahead. Backed up inside their own 20, the Ads lost 10 yards on a penalty, a rush and two incompletions. As Dampier lined up in the end zone for a punt, the snap sailed high over his head and rolled out of the back of the end zone for a safety.

However, CAL couldn’t do much with the lead as the Ads mounted one final push in the half. After moving the ball down inside the CAL 10, the drive stalled and a second field goal missed, this one wide left with 49 seconds remaining until halftime.

“It’s fourth-and-five and we hadn’t been running the ball very well, and with field conditions on you makes it tougher to throw the football, too,” Clevenger said. “You can always second guess yourself in games like this.”

The third quarter is when it all fell apart for Danville. Running seven plays during the quarter, the Ads were held with zero net yards as the Centurions scored 15 points to take a 17-0 lead.

The CAL defensive line started to show its strength and size advantage in the quarter, closing running lanes and keep Dampier constantly on his toes.

“We knew going in they were really good up front,” Clevenger said. “They were sitting there with two (6-foot-5) defensive ends and a good defensive front. We knew that going in.

“We hoped we would be able to get out and make some plays and force them to get out of their ground attack, try to get up and get a lead and make them put the ball in the air where they weren’t comfortable. We just weren’t able to do it.”

But it was that passing attack which pushed the Centurions over the top. On the first drive of the half, CAL went 47 yards in six plays, with more than half of those gains coming on a 27-yard scoring pass from Austin Carr to Milton Wright for a 9-0 lead.

The Ads were pinned back on their own goal line to start their second drive of the half after a CAL punt. But on the first play, another bad snap got past Dampier and went out of the end zone for a safety and an 11-0 Centurions lead.

Bad snaps have been a problem throughout the season for the Ads, and the familiar malady crept up again on the biggest stage.

“It is what it is, you’re sitting there and kids are fighting, they’re trying to make plays,” Clevenger said. “The ball gets slick. You can make excuses, but the deal is we just didn’t handle it right. We’ve got to learn from that and improve.”

And it got worse. On the first play after the free kick, Carr and Wright connected on a 45-yard TD pass for the 17-0 lead.

The Centurions put another score on the board early in the fourth. Wright lined up in the wildcat formation on fourth-and-goal from the 7 and rolled right with the ball, but instead of trying to find a running lane, he hit a wide open Nick Weaver for a score. 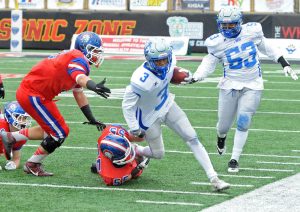 The Ads avoided the shutout with their best drive since the first quarter. A pair of Dampier completions, to Jaleel Warren and Ellison Stanfield, coupled with a CAL personal foul penalty put the ball on the Centurions 3, where Dampier and VanCleave connected on their final score in the quarterback’s high school career.

Danville outgained CAL 231-201, but only 112 of those Danville yards came in the second half.

Dampier closed out his stellar prep career with 163 yards and a score on 19-of-35 passing. VanCleave caught seven passes for 33 yards, Stanfield had five catches for 51 yards, and Warren led the team with 67 yards on four grabs.

Joining Dampier in the graduation line this spring will be Stanfield and Jeremiah Wheat. The trio were the lone seniors on a young Ads squad which made an unexpected return to the state title game after a 10-year absence.

The Ads ground game was held to 68 net yards, with Donlevy Harris gaining 38 yards on 10 carries. VanCleave added 35 yards, and Dampier had 18 yards.

Wright was named the game’s MVP for the Centurions after being involved in all three touchdowns. He caught three passes for 84 yards, rushed twice for 23 yards and completed the one scoring pass for seven yards.

“That’s the deal, it stings now, it’ll sting for a few days, but at the end of the day, you made it to the biggest stage,” Clevenger said. “There’s a lot of people who’d like to be playing in Bowling Green on the first weekend in December. You got that opportunity, didn’t make enough plays to win the game, and that’s obviously what we came down here to do, but it’s still a great year.”