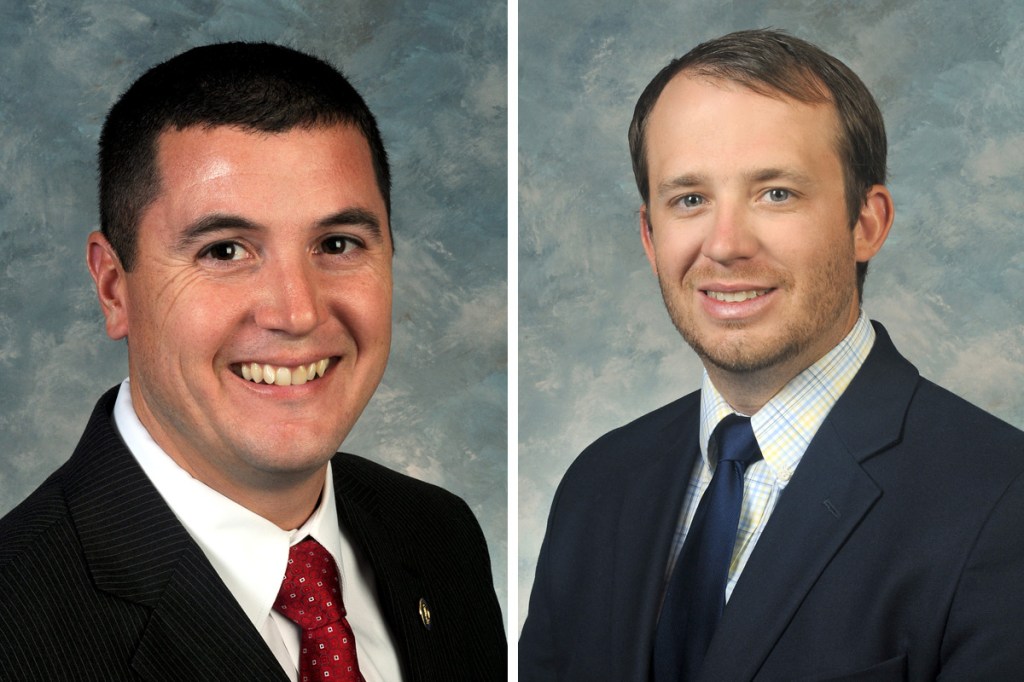 State representatives David Meade, left, and Jonathan Shell will serve as caucus chairman and floor leader for the new Republican House majority in 2017.

Two area representatives have been elected to serve on Kentucky’s House Majority Leadership team in 2017.

“As the floor leader, you kind of control the floor, the bills that come in and out of the floor,” Shell said. The position is the “top party position inside of your caucus,” he added.

Shell won election to the position thanks in part to his work as the House Republican campaign chairman for the 2016 election.

“He was in charge of overseeing all Republican recruitment for the 2016 House elections,” according to a news release from the Kentucky House Republican Caucus, which also noted Shell was the youngest member of the General Assembly when he was first elected in 2012.

Shell said he put 35,000 miles on his vehicle in 2015 and a similar number again in 2016, driving around the state and finding Republicans to run for House seats. He ultimately recruited about 45-50 different candidates over the two-year period. He said he also spent “countless houses sitting, cold-calling for campaign donations to help fund the elections.”

“But it was well worth it now,” he said.

The 2016 election was a broad success for Republican candidates in the House. Republicans gained a majority of the House seats for the first time in nearly a century, ousting 17 Democrats. Republicans will hold 64 of the House’s 100 seats come January.

Shell and Meade’s districts adjoin along the Garrard/Lincoln and Rockcastle/Pulaski county lines.. They said they’ve worked well together in the past and are excited to continue working together, this time as leading officials in the legislature.

Meade was first elected to his seat representing Lincoln and Pulaski counties in 2012. He was re-elected without opposition in 2014 and this year.

As majority caucus chair, Meade said his role is “to be the voice of the caucus.”

“My job is to relay (Republican House members’) thoughts and ideas to leadership,” he said. “And then a big part of the chairman’s job is caucus unity.”

Shell and Meade know each other well and have worked together in the past — their districts adjoin along the Lincoln/Garrard and Pulaski/Rockcastle county lines.

“Jonathan and I are great friends, just like most of us in the caucus,” Meade said. “He’s done a lot of work for our caucus, especially in the campaign season. We’re grateful for what he’s done.”

Shell said Meade is “one of the most respected” Republicans in the House.

“He is a very kind person; he is somebody that will always look to conflict resolution. He will always lead by example,” Shell said.

Shell said he and Meade have worked on legislation concerning adoption in the past.

“David and I both have a heart for adoption. We both have adopted children,” he said. “At some point in the future we want to look at that again.”

Shell and Meade said they will continue to focus on their districts in addition to the work now required of them as members of leadership.

“It can’t hurt the people that I represent to be in a majority leadership position. It’s a position that now all 100 members of the house are looking for direction to,” Shell said. “I’m just excited for what it will mean.”

The Republican leadership members are from two distinct areas of the state: Hoover, Meade and Shell represent a contiguous section of south-central Kentucky stretching from Madison County southwest to the Tennessee border in Clinton County; Osborne and Bratcher both represent districts in the Louisville metropolitan area.

“I’m excited to work with this group of incredibly qualified and motivated leaders,” Speaker-Elect Hoover was quoted as saying by the House Republican Caucus. “Alongside Senate President Robert Stivers and Gov. (Matt) Bevin, we will begin work immediately to determine the best path for Kentuckians. Through new ideas and a fresh direction, the commonwealth is poised for great things.”