Looking Back at KSD, Dec. 4

“Hallowe’en passed off quietly …save that the fairies, getting cold during the night probably, took a fancy to the bed clothing of a number of the boys and spirited the same away in the wee sma’ hours of the morning.”

“Our reporter from the boys’ department has just secured one of Webster’s big dictionaries and we fear that the consequences to the Boys’ Page will be serious. We will try to head him off if he grows dangerous, and we have warned him that we will not permit him to throw the dictionary at our readers.”

“Dinner was served at two o’clock and was all that a Thanksgiving dinner should be, the Thanksgiving bird, of course, holding the post of honor. This dish was flanked by an imposing array of vegetable dishes, with pies, cakes, etc., in endless profusion. Though the tables groaned beneath their weight of good things, the appetites of the pupils were equal to the occasion and few eatables survived the vigorous attack made upon them.” 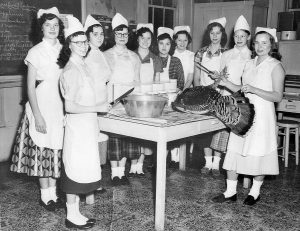 From the “Colored School”:

“The open season for quail in this state begins today, the 15th. The birds are said to be more plentiful than usual this season, but one must have a bird dog, must take out a license to hunt, and last but not least find a place to hunt which is not easy with practically every farm in the county posted, and farmers advertising that they will “prosecute friend or foe-alike” if found hunting on their lands. Something must be said for the farmers, however, since they have in the past suffered greatly from the many reckless, irresponsible hunters who have torn down fences, wounded stock, made themselves nuisances and frequently rendered it unsafe for the people of the farm to be out in the fields. The right kind of man can still find a welcome, with a good dinner thrown in occasionally, when he goes out in search of game.”

“The football season came to a close last week: the game with Stanford High School as scheduled for Nov. 18 was not played as the K.S.D. players had demonstrated this superiority when they smothered the Lincoln County boys early in the season with the score of 56 to 6. There are three victories, two defeats and one tie recorded by the 1916 football team. This does not include the several hard practice games with Centre College; the first game 34 to 0 in favor of C.C. was the first game of the season in this locality. The best practice game put up by our boys was one with Centre College, the score was 12 to 12; this game revealed the best working combinations of the backfield, these combinations kept up, and won all the remaining games of the schedule.”

Hold on to health

The law of the Camp Fire I will strive to follow.

In one of the schoolrooms the other day a journal written by a pupil who had witnessed the efforts of the Boys’ Supervisor to get rid of a cat contained the following. “Mr. Barron killed a cat three times but it is living now.” The teacher explained that Mr. Barron would have to “kill” it several times more before it would consent to stay dead.”

“Instead of the usual Hallowe’en party there will be a Tacky Party instead, on Nov. 15. Everybody is asked to wear tacky clothes. I know it will be lots of fun. Hope everybody will have a swell time.”

From “The Girls’ Side,” Lara Lillum Porter, Reporter

“With the coming of the dark days, the supper hour has been changed from 6 o’clock to 5:30 for the pupils and to 6 o’clock for the officers. The change was made November 6th.

Over sixty pupils went home Wednesday afternoon and Thursday morning to eat turkey with the home folks. Thursday morning, Mr. Swain conducted a Thanksgiving service in the chapel. A bountiful dinner with which the housekeeper and the cooks had taken the utmost pains was served at 1 o’clock, and the afternoon such of the pupils as wished to do so were permitted to attend the theatres uptown.

Friday was spent largely as the pupils pleased — reading, playing games, in conversation, sightseeing, or at the movies. The regular routine was resumed Saturday morning.

Quite a number of our young people used to go to the country at this season of the year to gather stores of walnuts, hickory-nuts and persimmons and had no difficulty in filling their sacks. But nowadays nuts are scarcer and have a commercial value, so the nutting parties sometimes return with empty sacks, but they enjoy the outings whether they have good luck or not. 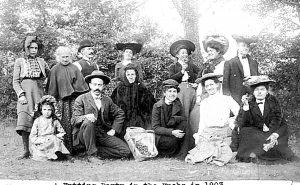 In October and November staff and students enjoyed going to the knobs to gather nuts. They usually returned with bushels and bushels of chestnuts, walnuts and hickory nuts. This 1903 nutting included Mr. and Mrs. Wilson, Mr. and Mrs. Reed. Miss Stephens and Mrs. Marcosson. Others, including the children, are not identified.

The school has purchased five big beautiful stoves for use in keeping the folks in the Colored school warm during the coming winter. A furnace?—”Go ‘way! Give me a big hot stove that I can cling to when the temperature goes down to zero.”

“In these days of warlike defense preparations, with a constant stream of draftees and volunteers entering the military service, nearly every family has one or more members enrolled in Uncle Sam’s army. But we doubt if there is another person in Danville or Boyle County who has as many near relatives enrolled as Mrs. J. F. Royster of our school. She has one brother and nine first cousins — she hasn’t counted the in-laws and the second, third and fourth cousins,—now in the United States military service. If there is another family in this section that can beat this record we would like to have its members speak up.”

Times change and we change with them

“The other afternoon, we were walking on Main Street when we met a group of attractive, eager girls out shopping and sightseeing and discovered that they were from our own school. We looked around for the teacher or the supervisor, and she wasn’t there. They chatted gaily for a few moments, for they were having a good time, and then passed on. Our mind went back a few decades; we remembered the decorous line-up of the Saturday shopping parties.

with the Teacher or Supervisor either leading the procession or stalking watchfully in the rear.

Probably the girls enjoyed the trips to town but it was a sedate form of enjoyment compared with that of their sisters of today. The girls of the advanced department are permitted, and have been for some years past, to go shopping unchaperoned any afternoon during recreation hours, provided at least two are in the party, and that they report their intended absence at the office.

The new way is best. When a girl is approaching womanhood it is time for her to learn to carry some responsibility for her conduct in the world in which she must soon take her place. The Plan has worked well for the girls do not violate the confidence reposed in them.”

A gorgeous Christmas ahead

“Recently our honest State Treasurer at Frankfort discovered that he had underpaid one of our officers on last month’s check. Filled with contrition, and perhaps bothered, because his books would not balance, he had the State of Kentucky make out a check to the officer for the sum of SIX cents. The officer was overwhelmed at the receipt of this windfall,—”What be I to do with all this wealth?” Yes, once or twice in a lifetime an editor has a piece of luck.”