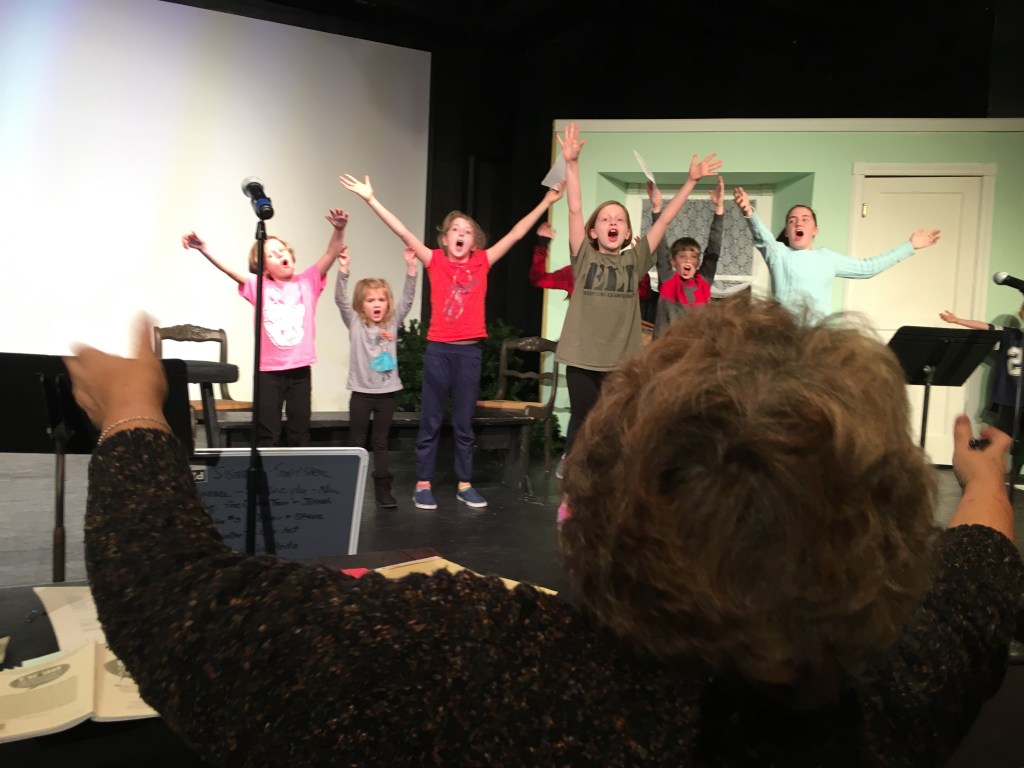 Bobbie Curd/bobbie.curd@amnews.com Karen Logue works with the kids in the production to get them excited.

Karen Logue sits on the front row of West T. Hill Theatre as actors and crew members scurry around, placing set pieces, reading from scripts, singing, laughing. The vibe during rehearsal for the latest offering is undeniably jolly.

First of its kind

“Why did we decide to do this? Oh, I don’t know — an experiment in terror?” the always-witty Logue says. She kids, she says, then gives a sideways look …

All joking aside, “Neighborly Noel” is in a league of its own. The first of its kind at WTH, it includes multimedia performances — of which Logue warns not to describe in order to avoid a spoiler —  a gaggle of holiday-excited kids singing catchy upbeat songs, and monologues that are both hilarious and sentimentally heart-tugging.

The brainchild of Logue with board member and artist Brandon Long, the meat of the play was written by Logue, using some excerpts from “Uh-Oh, Here Comes Christmas.”

“Good Christmas plays are hard to find and we wanted some holiday fun …” Logue says. “We wanted a true variety show. We got it!”

As for the multimedia hook of the show, Long says he had an epiphany.

“The idea, particularly the film segment, was one of those crazy ideas I blurted out in a board meeting, and Karen actually let me try it,” Long says.

When the two attempted to explain the concept to others, they received mostly stun looks, always accompanied by a “Huh?”

But Long says, “I told Karen — when you’re trying something completely new, that ‘Huh?’ is exactly the response you want …”

Logue says after all, the theater now has some new equipment — a used projector and film screen that was procured for its summer camps, but new to the theater.

“We also got some new state-of-the-art lights and wireless mics we wanted to use,” Logue says. Aside from that, Logue says there is an incredible amount of untapped film talent in the community. “We want to give those folks an opportunity to show their stuff.”

After brainstorming with Long, Logue jumped on the monologue and other writing while Long oversaw the film crew.

“The biggest challenge was making our ideas come to life — Brandon is very artistic and knew what he wanted,” Logue says.

Long says the hardest part was figuring out how to make the segments “look live.”

“The actors being filmed did a great job, and we nailed one of the segments in one take,” Long says. Todd Sheene of Walk Softly Films did all of the camera work and editing, and did a killer job, Long says.

Logue will emcee the production, consisting of 21 actors. Several children share scenes together, some with “flubbed” lyrics to traditional songs, inducing constant laughter during rehearsal.

“And you’ll love this, he’s going to sing two songs for the world premiere of a special holiday show next year, written by Liz Orndorff and Scott Brown,” Logue says.

Josiah Lynes stands at the mic. His deep blue eyes sparkle in the spotlight, never leaving a focal point he’s connected with straight ahead. The song is beautiful, then he moves to another he performs solely in German. Logue becomes still, as does the rest of the rehearsal audience.

“See? There literally is something for everyone …” she says.

“I think one of the strengths of community theater is that it is actually about our community,” Long says. “Of course, people come to see the shows, but the fun thing is seeing people you know, that you interact with on a daily basis in the shows — the fact that the guy that welds your muffler can be also be an Appalachian sheriff in a play.  What we wanted to do with ‘Neighborly Noel’ was to engage with those people, both on and off the stage.”

Logue emphasizes: This event is a very non-traditional one for WTH, “in that it is not a straight, scripted play or a perfectly blocked stage piece,” she says. “What it is, is a joyful attempt to celebrate all that is good. I believe that is just what we need.”

The cast and crew