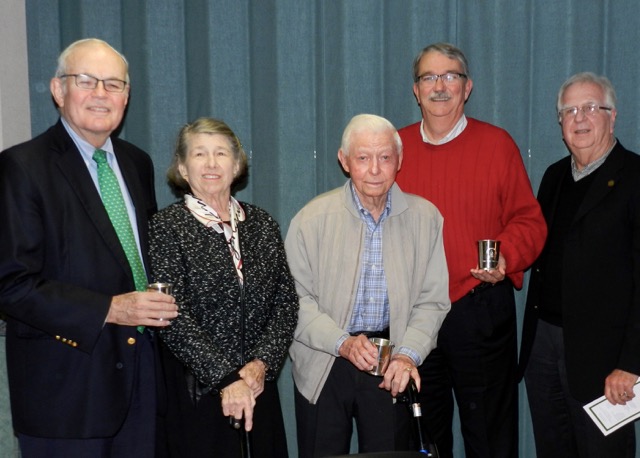 The fiscal court was recognized with the Barbara Hulette Service Award, given to an individual or organization for service to the preservation movement or to a specific project in the county.

The court wanted to rent some of the row houses on the Square from state government in 2009, but was instead offered ownership of the property by the state because of poor conditions and budget cuts.

The fiscal court recognized the historic importance and the unique prospects that Constitution Square had to offer the county and agreed to accept ownership of the park.

The court worked with the state Heritage Council to insure the row houses, Watts-Bell House, Grayson’s Tavern, and the Goldsmith House would remain intact.

Easements were secured and work began with a $500,000 grant to renovate and make the buildings handicap-accessible.

After work was complete, the fiscal court leased the buildings to the Boyle County Economic Development Partnership.

The fiscal court established an endowment in 2013 to fund the park forever. The $100,000 fund has grown to more than $200,000 from contributions by various Boyle County organizations, Hulette said.

The fiscal court also established the Friends of Constitution Square endowment, designed for individuals and organizations devoted to the mission and perpetuity of the historic site. The money will be used for programs at Constitution Square to enhance the quality of life in the county, Hulette said.

J.T. Goggans, a local contractor and farmer, was presented an award he has sponsored for many years — The J.T. Goggan

He was recognized for his strong commitment to quality craftsmanship for historic structures in Boyle County, said Julie Rodes, who made the presentation.

He has restored many historic structures in this area, including Old Centre and Arcadia.

“He built a company of pride,” said Rodes. “He also has saved pieces of other historic properties that were torn down.”

Robert and Wendy Lewis, who live in a historic house on Lexington Road, were given the Cecil Dulin Wallace Award, the oldest award presented by Boyle Landmark Trust.

Pat Boatwright, vice chairperson of BLT, said the award is given to individuals for their lifetime of service to the preservation movement in Boyle County.

“The couple always lend a helping hand and a friendly smile while working in preservation,” Boatwright said. “The couple serve as a model in the preservation program for future generations.”