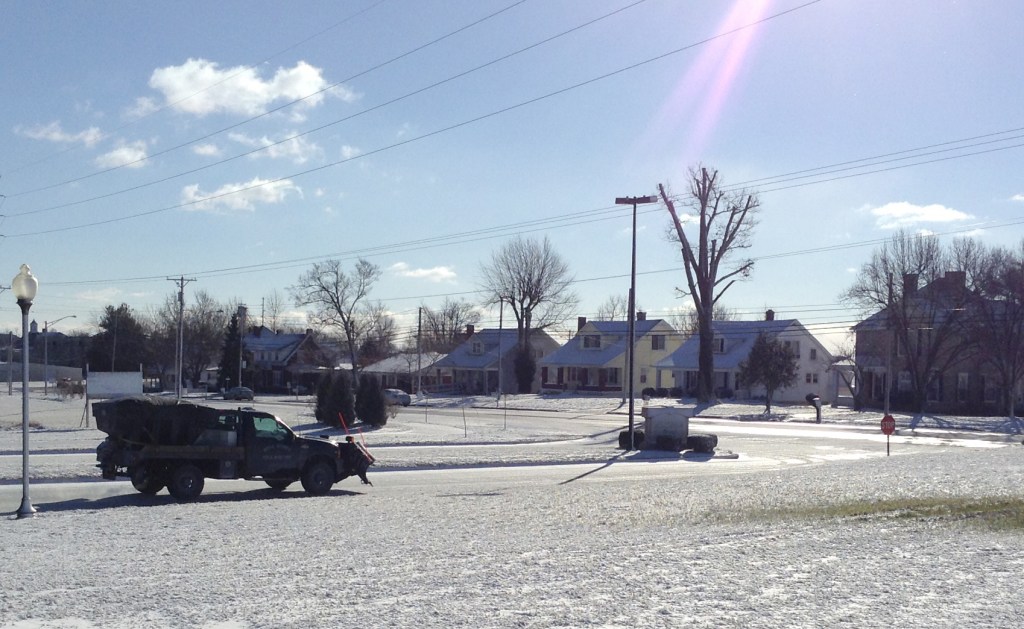 Kendra Peek/kendra.peek@amnews.com A Boyle County road truck with a plow works on a road leading to Millennium Park and Centenary United Methodist Church in 2014.

“We are beginning to get the trucks prepared for snow,” he said.

Snow is in the forecast for next Thursday, Dec. 15, and Campbell said they’ll be ready for it.

“We are getting salters and plows ready. Salt is never an issue this time of year,” he said. “If we get lots of snow, by February, we’ll see.”

The extended forecast on weather.com, which Campbell has been using to predict this winter’s weather, shows the Boyle County area “slightly above in temperatures and slightly below in precipitation,” he said.

“It says we will have a ‘La Niña’ winter,” Campbell said. “If you believe that, we’ll have a mild winter. We’ll see if they know what they are talking about.”

It also calls for a wave of moisture every few days, which he said could translate to several small snows.

The state department is gearing up for harsher weather, based on recent winters, according to a press release from the Kentucky Transportation Cabinet.

New equipment has been obtained at the state level to ensure that “high-priority routes” such as interstates remain open when the snow flies.

A website has been developed by the transportation cabinet at snowky.ky.gov, to give information on priority routes, winter weather tips and more.

Whatever happens, Campbell said the local road department will also be prepared.

“We plow and we salt and we do it until we get the roads clear,” Campbell said.

SO YOU KNOW
The Kentucky Transportation Cabinet offers the following advice for drivers in winter weather:

• Pay attention to weather advisories; weather will impact your commute on some level.

• Travel only as necessary during major snow events; it’s better to be stuck at home than to be stuck on the road.

• Maintain a safe distance from snow plows and other heavy highway equipment.

• Do not pass snow plows on the shoulder.

• Allow time for a slower commute.

• Visit goky.ky.gov and download the free Waze app to check traffic conditions before you travel.

• Eliminate distractions such as eating or using a phone while driving.

• Follow the Quick Clearance law, which requires drivers to move vehicles to the shoulder in the event of a non-injury crash.