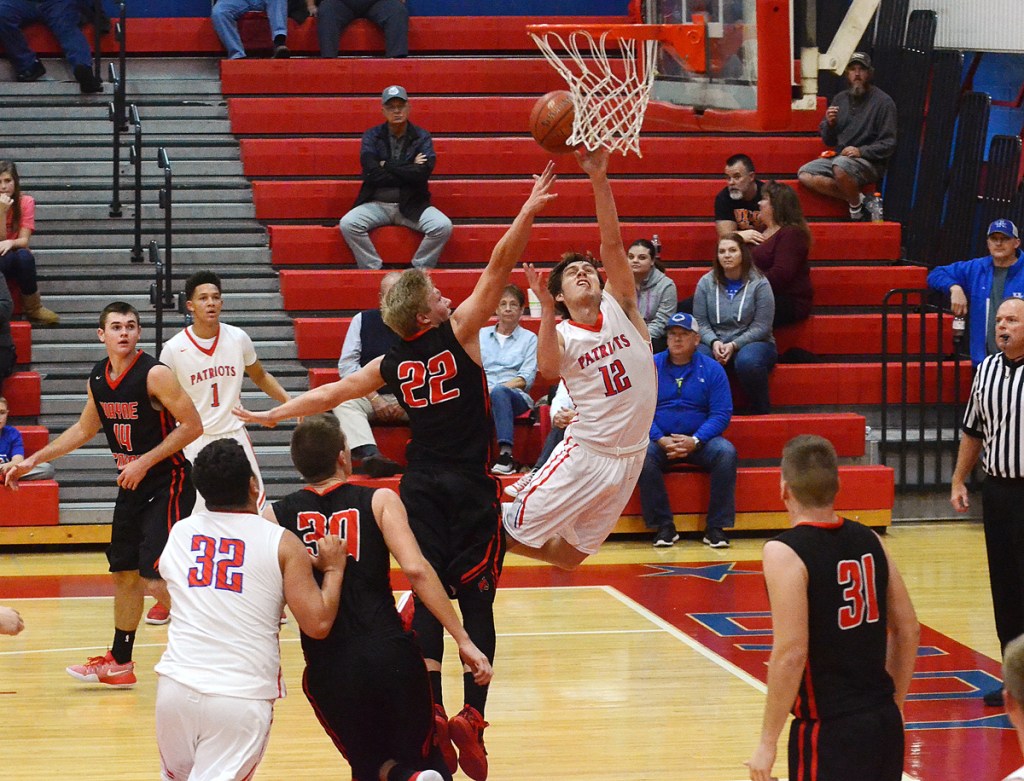 Nancy Leedy/nancy.leedy@theinteriorjournal.com Noah Young of Lincoln County drives past Logan Brett of Wayne County for two of his game-high 25 points in the Patriots 69-59 win over the visiting Cardinals. Young also had four assists for the Pats.

STANFORD — Lincoln County buried 9-of-16 3-pointers as the Patriots extended their win streak to three games with a 69-59 win over visiting Wayne County Tuesday night.

“It was a heck of a game,” Lincoln coach Jeff Jackson said. “They’re good. They’re so solid defensively and so well-coached. It’s a battle every time you play them and any time you can beat a Wayne County team the kids have accomplished something. I’m real proud of our kids.”

Noah Young led the Lincoln offensive attack with a game-high 25 points, going 9-for-17 overall, 2-for-2 from 3. Chase Phillips had a season-high 21 points on 7-for-9 shooting with one trey. He led the Pats on the glass with seven rebounds. Devin Alcorn led the 3-point barrage by connecting on 4-of-8 attempts from behind the arc. He finished with 13 points. Tanner McAninch rounded out the Patriots’ double-digit scoring with 10 points, going 2-for-3 from 3-point land.

“We only had four players to score but all four were in double figures. So that’s a good thing,” said Jackson. “Chase played really, really well tonight. He’s played well all year. He works hard. He’s in this gym all the time trying to get better and that showed tonight. Noah does a great job running our team and he led us again.”

Lincoln, which shot 57 percent from the field for the night, connecting on 24 of 42 shot attempts, went 4-for-4 from 3-points out in the first four minutes of the game. Alcorn opened the scoring with his first triple, McAninch followed with his first 3, then Young drained two treys to put the Pats up 12-5.

A McAninch layup and back-to-back Young buckets extended Lincoln’s lead to 18-7 at the end of the first. The Patriots posted their biggest lead of the half, 20-7, at the start of the second quarter after a Phillips’ field goal.

Unfortunately, the Patriot offense hit the deep freeze after the Phillips’ bucket, opening the door for a Cardinal comeback. And come back they did. Jakson Baker, who shared high-scoring honors with Aubrey Weaver with 14 points apiece, went inside to score and ignite a 15-0 Wayne scoring run. Logan Brett nailed a 3-pointer, Will Roberts and Weaver each got a field goal and two free throws before Baker closed the run in the paint for Wayne’s first lead of the game, 22-20.

Phillips put an end to the Wayne run with a basket with 1:22 to go in the half then Alcorn followed with a 3-pointer and Young banked in a shot to edge Lincoln ahead 27-24 at the break.

Lincoln (3-1) never trailed in the second half.

Baker knocked down back-to-back buckets to tie the game at 32-all with 5:51 left in the third only to have the Pats roll off six straight points. Young got two free throws off a turnover and followed with a basket then dished inside to Phillips for a bucket and a 38-32 edge.

The Patriots’ lead never fell below four points the rest of the way. McAninch scored at the buzzer to end the third 46-40 then Lincoln opened the fourth quarter on a 9-1 run. Phillips had a 3-pointer and a bucket in the run and Young had two field goals to make it 55-41.

The Pats led by as many as 15 points in the final frame, picking up their last eight points on 13 trips to the foul line.

“The second half we defended really, really well until late. They got to the basket a few times and made some shots. I just wish we would step up and make our free throws a little better,” Jackson said. “We also did a better job rebounding the second half. The first half they just thumped us on the glass. We’re not real big so we all have to block out and do our thing. But it was a good team win against a really good team.”

“They (Wayne) are going to be real good as the year progresses, hopefully we are going to continue to improve as well.”

Carlos Nunez, Sawyer Carrier and Blake Smith did not get in the scoring column, but Jackson acknowledged the lift they gave Lincoln.

“Carlos, Sawyer and Blake gave us some really, really good minutes off the bench,” he said. “We’ve told them it’s got to be somebody different every night. We all have to be playing together and playing our best and we have to be ready when it’s our turn.”

The Cards outrebounded Lincoln 25-16 led by Baker with 10 boards.