Slow start or not, Lincoln girls roll over Wayne 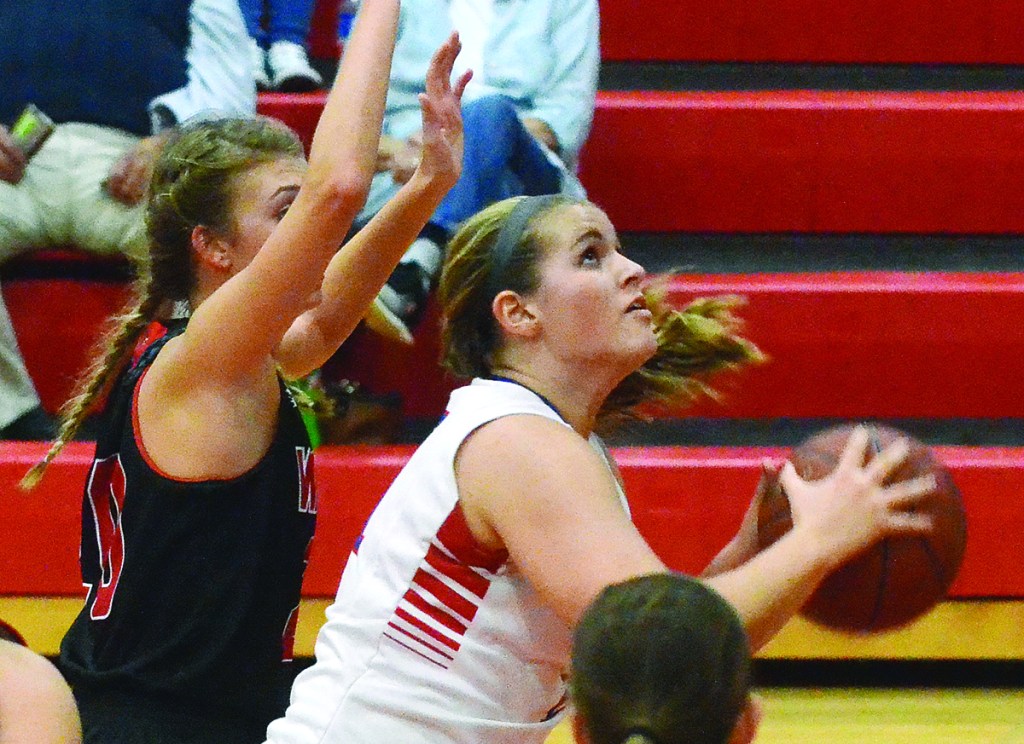 Lincoln County's Kaitlynn Wilks has her eye on the basket Tuesday night in the Patriots' 70-44 rout of visiting Wayne County. Wilks posted her third straight double-double in the win, finishing with a game-high 18 points and 12 rebounds.

STANFORD — Basketball fans not on hand to see the Lincoln County girls win by 26 points Tuesday may have a hard time believing the Patriots had a slow start to their game against Wayne County, with five turnovers in the first six minutes and 10 missed shots.

Lincoln’s lead was just 6-4 at the end of the first quarter. However, things got rolling with a 17-3 run over the first 4 minutes, 12 seconds of the second quarter. The run put the Patriots up 23-7 and they never looked back, building on their lead the rest of the way en route to a 70-44 victory over the visiting Cardinals.

“Neither team looked good at the start,” Lincoln coach Cassandra McWhorter said. “They looked like they just got off the bus and we looked like we weren’t ready to play. But after we got the first quarter out of the way, we started to pick up and play basketball the way we are capable and did a better job of doing the things that we want to do. I just want to put four quarters together doing that, though.”

McWhorter said Tuesday being Lincoln’s first home game may have factored in the slow start.

“It might be a little of it being a first home game and wanting to perform well in front of the home crowd, but we’ve got to learn to start a game the way we want to start and play four full quarters,” she said.

Sophomore center Kaitlynn Wilks led the Patriots (3-0) for a third straight game, earning a double-double with a game-high 18 points and 12 rebounds.

“Kaitlynn Wilks has started the season off great. She’s had three games with three double-doubles. Hopefully we can continue that consistency,” McWhorter said. “Until somebody stops that, that’s our bread-and-butter right now. We need to keep feeding her the ball and that opens up people on the outside like Emma (King) and Maddy (Boyle) to knock down 3s. Logan (Godbey) hit a 3 tonight. We kick out to Jenna (King) and Jenna looks to attack the rim and score. So we’re doing some things well.”

Several Patriots got in on the action during the 17-point surge to start the second quarter. Wilks hit back-to-back jumpers, converting a three-point play on the second shot, Zaria Napier came off the bench to get her own back-to-back buckets, Emma King also scored a three-point play then added another free throw and Jenna King closed the run with a bucket in the paint off a Boyle assist followed by two free throws for a 23-7 lead.

Meg Burchett, who led Wayne (0-4) with 14 points, scored late in the half for the Cardinals and Macey Blevins scored six of her 11 total points in the final three minutes to get Wayne within 28-18 with 46 seconds left in the half.

Haley Southerland, a reserve guard, cushioned the Lincoln lead in the closing 30 seconds, scoring back-to-back buckets in the paint for a 32-18 halftime lead.

The Pat lead was never threatened in the second half. Lincoln edged Wayne 17-16 in the third quarter to take a 49-34 advantage, then closed on a 21-10 fourth-quarter run to secure the big win.

“We did some things well tonight. When we turned the ball over, I thought we were attacking the rim well,” McWhorter said. “We did what we were suppose to do and we got a ‘W.’ But we’ve got some little things that we need to work on and get better as the season progresses to get ourselves tournament ready.”

The Patriots outrebounded the Cards 41-31 and had 16 turnovers. Wayne had 25 turnovers.