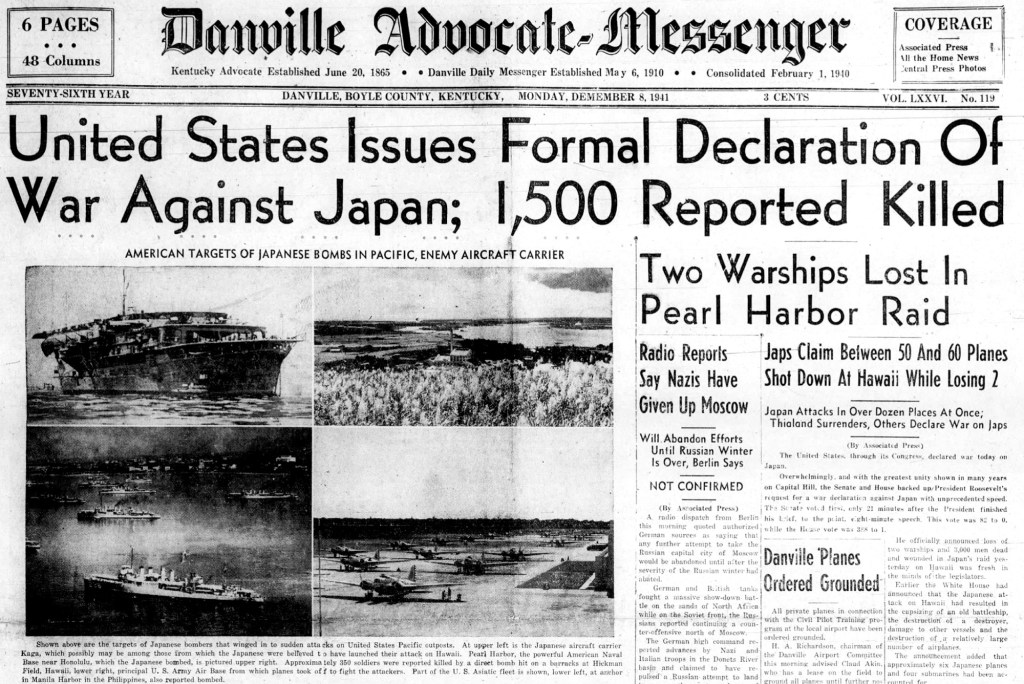 The front page of The Advocate-Messenger on Dec. 8, 1941, announced the Japanese attack on Pearl Harbor and the U.S. declaration of war.

In Danville, news of the war broke on the front page of The Advocate-Messenger on Dec. 8, 1941. “United States issues formal declaration of war against Japan; 1,500 reported killed,” read the eight-column, double-decker headline that day.

Financial efforts to support the war effort immediately got underway, according to news articles from the days and weeks that followed.

Local newspaper carrier boys got together with an estimated 500,000 carriers around the nation to begin selling U.S. Defense stamps along with newspaper subscriptions.

The local Red Cross chapter worked to raise $5,000 in Danville toward a nationwide goal of $50 million for war relief. Boyle County had exceeded its goal with more donations still coming in as of Jan. 23, 1942. In nearby Garrard County, the Red Cross chapter raised more than $4,000 of its $3,000 goal within five days of the Pearl Harbor attack, according to archived news stories. 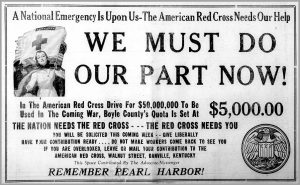 Articles in The Advocate-Messenger implored young men to join the U.S. Navy and discouraged the public from voicing anti-war opinions. Near daily briefs detailed dozens of local people enlisting and provided updates on locals who were already overseas or otherwise affected by the war.

“No word has been received here today from Sherman Ferrell, who has been stationed in the Hawaiian Islands with the U.S. Army Anti-Aircraft units since September 1940,” one such article published the day after the bombing reads. “Roy Spears, Danville, attached to the U.S.S. Saratoga, one of the Navy’s aircraft carriers, wired relatives here today that he is safe in Los Angeles but has been ordered to report to his ship at an undisclosed port immediately. It had been feared by members of his family in Danville that he might be in the Pacific war zone.”

A Dec. 9, 1941, article revealed that two sons of a Boyle County magistrate were fighting in the war zone.

“Two sons of Mr. and Mrs. Jack Leonard of Perryville are in the battle area of the far east,” the article reads. “Mr. Leonard, who is a member of the county fiscal court, said this morning that Ben Leonard was in Pearl Harbor in Hawaii, where he is with the Navy and assigned to the U.S.S. St. Louis. He said Hugh Leonard was with the Army and is in the Phillipine Islands where he arrived there weeks ago.”

A Wilmore man who was “well known” in Boyle County was killed in the Pearl Harbor attack, according to a Dec. 11, 1941, article. Elmer Walters, 23, was stationed on the U.S.S. Oklahoma, according to the article.

“Word of the death was also sent to Miss Margaret Campbell, daughter of Mr. and Mrs. Atwood Campbell, Danville, the fiancé of the sailor, one of the first Kentucky casualties of the war with Japan,” the article reads.

War rationing was soon taking its toll on Boyle County. In January 1942, Boyle County as a whole was limited to using 15 new tires.

“Danville and Boyle County drivers will have to get along with their present tires, for a while at least,” that article reads.

Fear and suspicion of people with Japanese ancestry was also present in the Danville area.

Following the bombing, the Federal Bureau of Investigation asked Danville Police Chief R.E. Durham to scour Danville and Centre College for any Japanese people, according to a Dec. 8, 1941, article. Durham reported back he could find no Japanese people in the area.

“‘The Danville Police Department will be on the alert more than ever before,’ Chief Durham said this morning,” the article reads. “Just what his department will be called upon to do he does not know at present, he said, but plans are being formulated to guard more closely the Southern Railroad property here.”

“Mayor Nichols said that the council would be organized at a meeting of a citizens committee appointed by the city council some time ago. The committee is composed of representatives of every organization in Danville,” an article reads. “he said the committee would meet with Carl Wachs, executive secretary of the Kentucky Municipal League, probably Thursday afternoon to plan the civilian defense program here.”

On the sports side of the news, Haskell Short acknowledged athletics would need to take a back seat to the war effort.

“The war will interfere with the sports picture everywhere, even here in Danville. Many of Centre’s athletes will be called,” Short wrote in his daily “In The Press Box” column. “College athletes are the ones that will be affected most here as few of the high school athletes will be called at the present time. On Centre’s football team, graduation will get four of the boys and the draft will probably get two more soon, as Horace Morrow, end, and Hollis Evans, all-state center, are living on borrowed time from the draft board now. Wilbur Casket, Centre back, also rates high with his draft board. John Haddock, the Colonel’s backfield star, isn’t old enough to register for the draft.”

Local farmers worked to support the war by “preparing to produce in 1942 the biggest supply of foods in their history,” according to a Dec. 12, 1941, article, headlined “Boyle farmers will do their part in meeting nation’s war requirements.”

All farms in Boyle County were surveyed and national quotas were set for production, according to the article.

“Boyle County is asked to increase milk production at least 134,000 gallons over what was produced in 1941, an increase in eggs of 47,000 dozen, hogs 13 percent and beef cattle raised 10 percent,” the article reads. “These increases could be met by better feeding and management, the county agent stated, but according to the survey farmers will increase numbers also.”

Farmers said they planned to exceed their egg quota and produce an additional 65,000 dozen.

“Farmers can meet the expected needs without wasting soil resources,” the article reads. “Labor shortage will be the most serious factor in meeting agricultural production requirements, according to Mr. Locklin. Farmers will have to make full use of mechanical equipment to make up for labor shortage, said Mr. Locklin.”