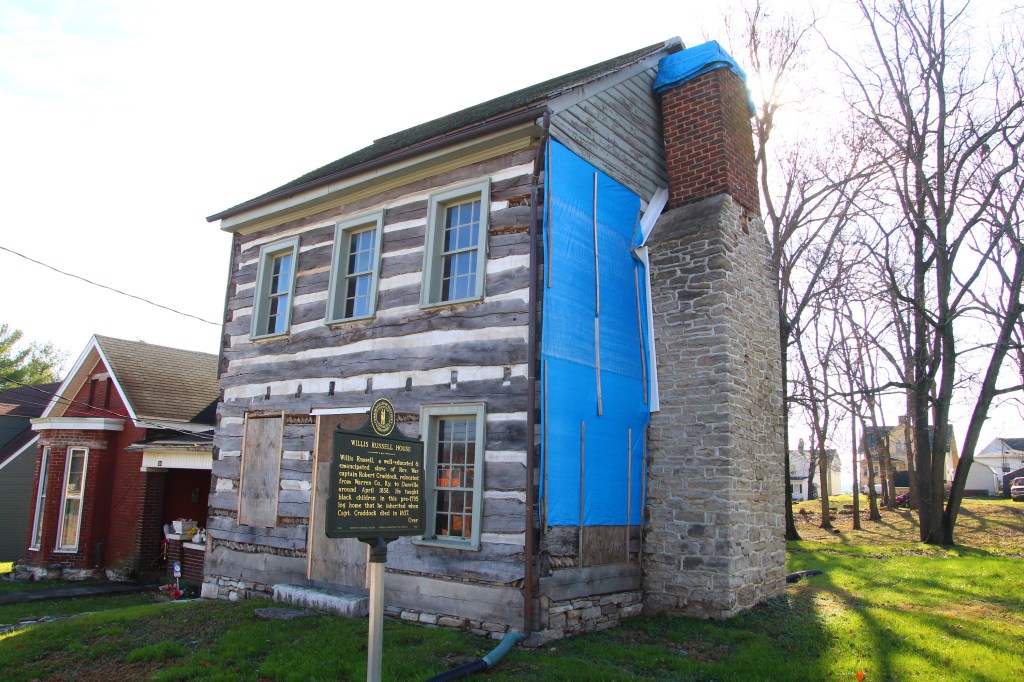 Ben Kleppinger/ben.kleppinger@amnews.com  The Willis Russell Memorial Cabin on East Walnut Street has undergone years of restoration work. The Boyle County Landmark Trust plans to sell the house and put the funds toward a revolving fund.

Barbara Hulette, former president of the preservation organization, said renovations to the house are complete and it will soon be put on the market for sale.

The historic log house, built in the 1790s, has undergone major renovations and historical preservation since the 1980s.

Hulette said while the house is not currently move-in ready, the structure is sound and historical architectural elements have been preserved.

“It stands ready for a new life as a historic landmark in downtown Danville to benefit the community,” she said.

The Willis Russell Historical Society maintained the building for many years and Landmark Trust has funded major renovation efforts to save the building, Hulette said.

The most recent work has included reworking the foundation and making critical structural repairs.

Several educational tours and historical events for children have been held in the two-story structure.

Proceeds of the Russell House sale will be be used to develop a revolving fund for Landmark Trust.

New officers were elected for 2017 and other reports also were given at the meeting.

Pankey said Landmark Trust has had an active year including celebrating the 50th anniversary of the Preservation Act, deciding to sell the Russell House and developing the revolving fund for future preservation.

He praised the board for being “active and committed to the mission of Boyle Landmark Trust, which is to strive to protect and promote cultural, natural, historic, architectural and archaeological heritage” of the county.

This year, Landmark Trust hosted a “Celebrate Preservation” event at Third Street Methodist Church and a fundraiser at Wilderness Trail Distillery, and decided to begin educating the community through social media.

Pankey said the organization’s Facebook page has gathered 218 followers since it began in January.

Susan Jonas announced 21 plaques to mark historic homes have been sold to date. She said plaques are displayed on structures supported by Landmark Trust to let the public know Danville has a rich architectural heritage.

For more information about the 88-member Landmark Trust, visit boylelandmarktrust.org.