Bill McCowan, Stephen Martin, Sonya Kitchen, Hershel Fletcher, and Kenny Baldwin were sworn in. The five are returning members to the council. 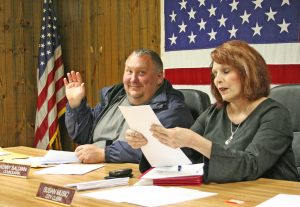 The council’s one new member, Pete Kendrick, was not at the meeting, but will be sworn in before Jan. 1.

The meeting also included discussion of purchasing tables and chairs for the Junction City Community Center, which can be rented out through city hall. The problem, said Mayor Jim Douglas, has been that people tend to carry the chairs off when they leave after renting.

Conversations turned to potentially enacting a lease deposit and inspecting the facility after being rented to ensure everything was still there. Douglas said he would look into that.