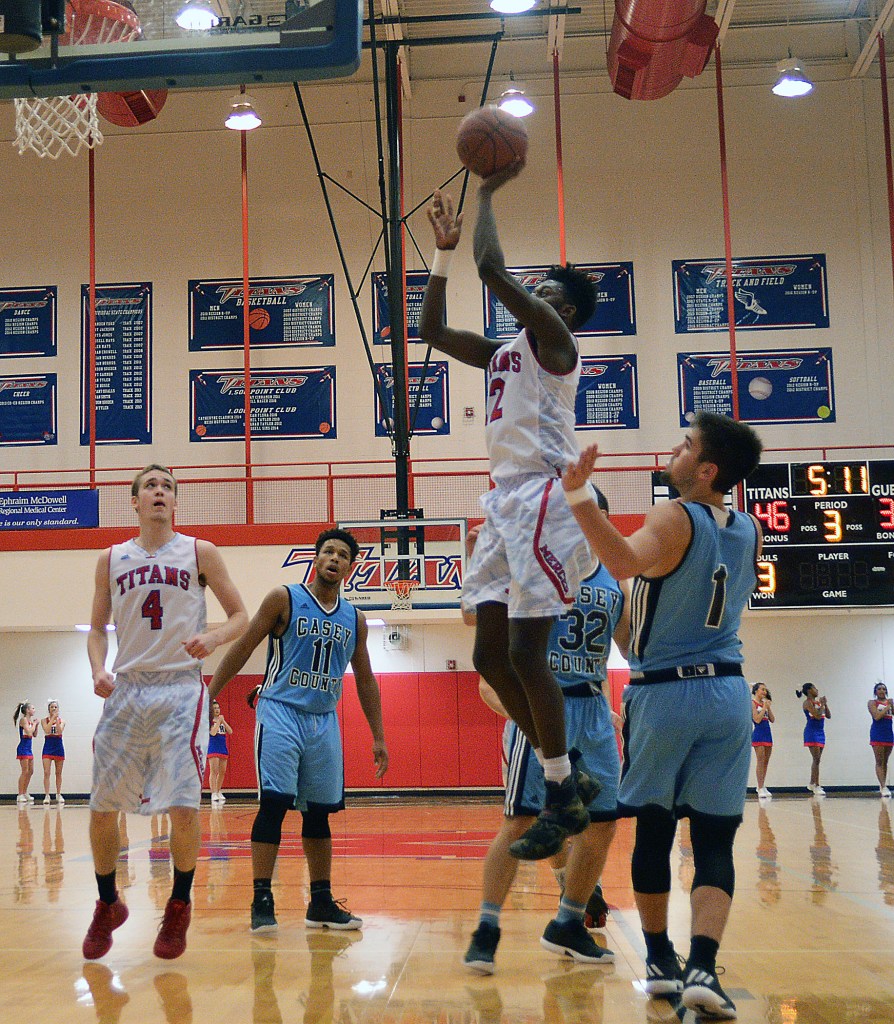 Jeremy Schneider/jeremy.schneider@amnews.com Mercer County's Trevon Faulkner goes up for two of his game-high 30 points in Thursday's 99-85 win over Casey County. Faulkner also led all players with 16 rebounds as the Titans improved to 3-1.

HARRODSBURG — The last time Mercer County and Casey County met in a boys basketball game, there was a great deal riding on the outcome of last year’s 12th Region tournament championship game.

While Thursday’s regular season rematch might not have held the same stakes, it doesn’t mean the outcome meant any less to either squad.

The Titans won their second straight game with a 99-85 win over the visiting Rebels, moving to 3-1 on the young season. It was the most points they’ve scored in nearly a year, since posting 103 points on the Rebels in an early December regular season game last year.

“We beat these guys in the region championship last year, so we knew they’d come out with emotion,” Mercer junior Trevon Faulkner said. “We just tried to come out here and prove we’re still a good team and can beat anyone at any given time.

“We came out and tried to prove we’re no worse than last year. We came out here to do what we do and what we can do.”

The Titans are starting over in four of the starters spots, with only Faulkner back from last year’s 33-win state tournament team, and they’re breaking in a new coach with Kurt Young. So far, though, the Titans are rolling, averaging over 77 points per game in Young’s fast-paced offense.

“This team does a tremendous job of sharing the ball,” Young said. “When you play fast, sometimes it’s tough because you’re aggressive and attacking the rim, and sometimes guys get out of control. Tonight, we did a phenomenal job of knowing when to attack and then when they cut off lanes, we were kicking it out and making the extra pass.

“There’s a lot of things we can improve. But the great thing is they’re all fixable things. Hopefully this team will continue to get better as we get the football out of us a little bit and they learn the system.”

The game had plenty of star power on the court, starting with Division I college recruit Faulkner. He was coolly efficient in posting game highs of 30 points and 16 rebounds. He had 17 points by halftime and score nine in the final frame as Casey chipped into Mercer’s double-digit lead.

“All of our guys have been working hard on their skill work,” Young said. “We feel if you play hard, good things happen. I felt Garrett and Rhyan did a great job of that.”

For Faulkner, having talented teammates takes some of the pressure off his shoulders to completely carry the load by himself.

“I love playing with these guys,” he said. “I just want to make them better. Me taking over the team this year and being a leader, I’m learning as well by being a good teammate and feeding them the ball. I don’t really care if I score as much, I just want my teammates to get better and us get the win.”

Max Reyes added 15 for the Rebels (0-4), but only four other players scored for Casey, and none more than six points. 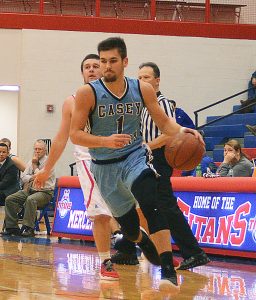 “(Smith) draws so much of the defense and there’s so much focus on him,” Casey coach Jason Price said. “He’s going to be the all-time leading scorer in Casey history, so he can definitely score the basketball. He’s been very consistent for us this year. We know he’s going to bring it every game.

“We’ve got to give him more help. My guards played well at times tonight. Sometimes I feel like we dribble instead of move it. We’ve got to trust our teammates a little more.”

The teams played even for most of the first quarter until two straight baskets by Faulkner keyed a Mercer 12-0 run. Dean had the next five points before Faulkner hit a 3 to end the run. Miller made his first trey at the end of the quarter, but Mercer still led 21-15.

Smith opened the scoring in the second quarter with a 3-pointer, but the Titans steadily built a double-digit lead at 32-21 with 3 minutes, 19 seconds remaining until halftime. A Smith 3-pointer and Reyes basket cut it the lead to six points, but Faulkner scored eight points in a 10-4 run to close the half for a 44-32 lead.

The second half behaved much the same way, with Mercer holding a large lead until Smith and Miller cut into with 3-point shooting and drives to the hoop only to have Faulkner, Dean or Lanham end any Rebels rally.

“We brought it with effort, but we didn’t execute defensively,” Price said. “Our problem obviously isn’t scoring. We’ve got to really focus on the defensive end.”

The final gasp of the game came from the Mercer bench and stands as Faulkner went up for a dunk with 33.8 seconds left only to have his feet taken out from underneath him and land hard on his lower back. He walked off the court and said he felt fine after the game.

“He’s a tough kid, but he did the right thing, he attacked the basket, and the kid did what he was supposed to do and protect the basket,” Young said. “It was a good basketball play. Fortunately, he was able to get up and respond.”

While Mercer looks ahead to a matchup with Paris at the Kentucky Bank Shootout in Bourbon County on Saturday, Casey will search for its first win of the season tonight at Pulaski County.

Road games at Mercer and Pulaski on back-to-back nights might seem brutal, but it fits what Price is gearing his team for down the road.

“We want to prepare for the postseason,” Price said. “These losses are tough, but we’ve got our eyes on the postseason. We’ve got to get it right then.”