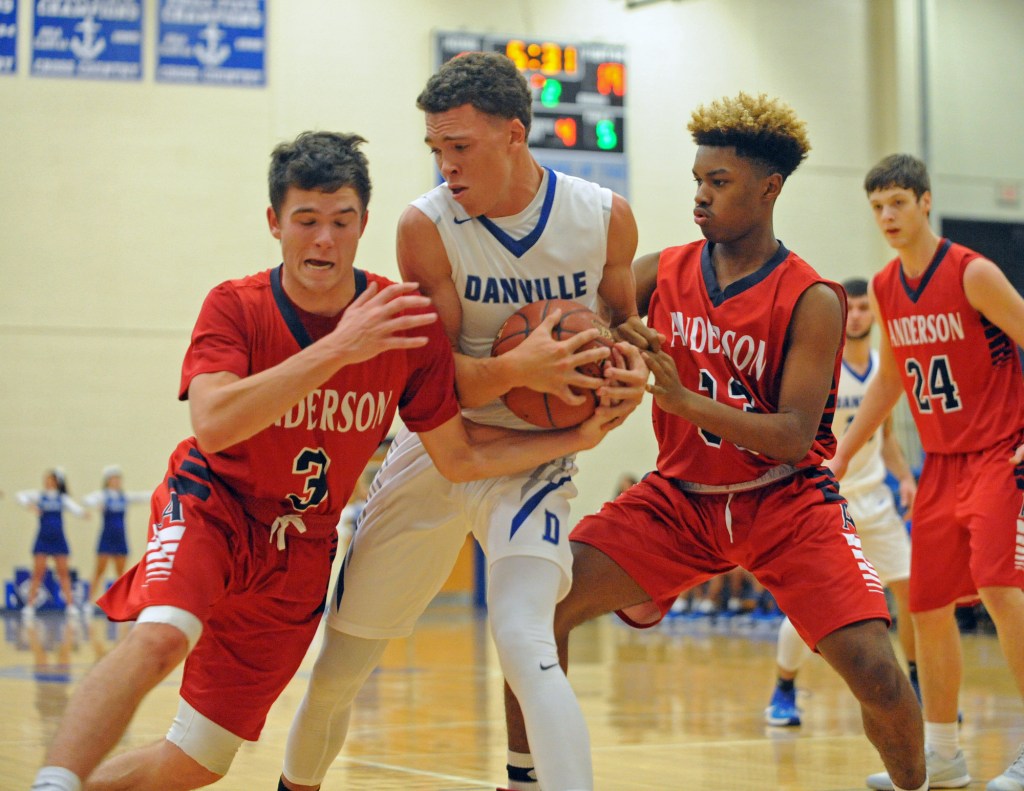 Matt Overing/matthew.overing@amnews.com Jared Southerland fights off two Anderson County defenders during the first half of Tuesday's game. Southerland finished with 14 points in the Ads' loss.

Danville had three players in double figures but couldn’t find the offense needed to beat Anderson County on Tuesday, falling 75-62.

It was the best offensive output of the season for the Ads, who have played just three games with football players back in the fold.

“We made a few steps forward, our ball movement was better,” coach Ed McKinney said. “We still don’t totally know what we’re running offensively, but we’ve got one guy that has really played a lot of varsity basketball. We missed three months of fall practice. So we’ll get more organized.”

The Admirals burst out of the gate, hitting five three-pointers in the first quarter to lead 17-13 after one quarter. But that offensive burst didn’t last, as they scored just eight points in the second frame to trail 31-25 at halftime.

“I probably could’ve used the bench a little bit more to give the guys a rest,” McKinney said. “But we played so well early, we got off to a good start, I didn’t really want to sub. My intentions were to get Jared (Southerland) and Deshaud  (St. Martin) a break at about the four minute mark. But we were rolling, so I didn’t want to break the momentum.”

The Danville offense looked better after the halftime break, scoring 22 points in the third quarter. But the defense continued to struggle, particularly against Anderson guard Cobe Penny. Penny scored a game-high 40 points, 24 of which came in the second half.

“We’ve got to get collectively more hungry defensively to get possessions. Then we’ve got to finish rebounds. Maybe that’s a fatigue problem, we’ve got a lot where we’re getting our hands on a lot of balls, we just don’t grab them.”

Tanner Ford led the Ads with 15 points. He fouled out late in the fourth quarter. Southerland added 14 points and St. Martin scored 13. David Walker had nine points, with five coming in the first four minutes of the game. Senior Ellison Stanfield scored five points off of the bench, all in the third quarter.

McKinney said he wants to see more drives from his offense in the future. The Ads had just seven free throws against Spencer County on Saturday and went 8-for-12 from the line against Anderson, who went 16-for-24 on Tuesday.

“We need to drive the ball more,” the coach said. “We’re settling for the hard two, and we’ve got guys who can get to the rim and finish. Jared probably needs to drive it more. We’re settling too much, but the three was good to us early … They were calling a lot of stuff on their end, and we let them off of the hook on this end.”