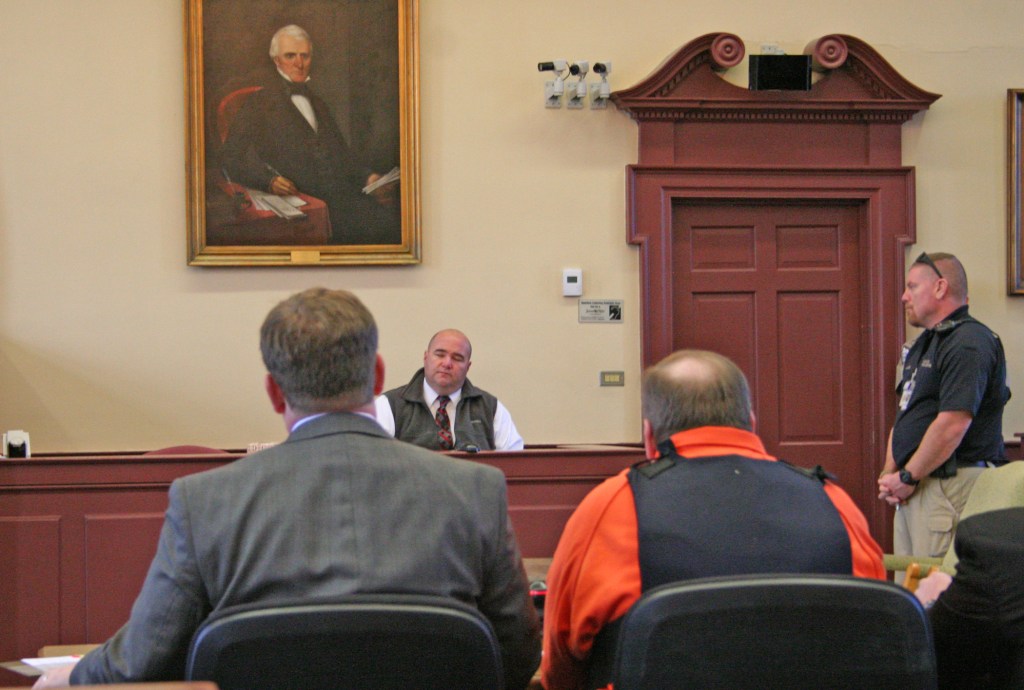 (Kendra Peek/kendra.peek@amnews.com) Det. Kevin Peel with the Danville Police Department answered questions Thursday regarding the affidavit used in obtaining search warrants on the home, business, church and two personal vehicles belonging to Kenneth Allen Keith prior to his arrest.

It will be March before the man accused in the 2013 shooting deaths of three people in Danville will face a judge again.

The purpose, said Cox, was not to get any specific bit of evidence uncovered in those searches thrown out, but to “make sure the law is followed every step along the way.”

Cox admitted he wasn’t sure that suppression of the evidence would have any bearing on the prosecution’s case against Keith.

“I’m not sure exactly what the end result would be, but we would have gotten suppression of the evidence,” he said.

Keith is charged in the deaths of Mike and Angela Hockensmith and Dan Smith at the ABC Gold, Games and More in Danville. The Hockensmiths were the proprietors and Smith was a gold buyer who stopped regularly at the store. Keith, according to reports, is a former employer and was once part owner of the store, and was familiar with the three individuals. The Hockensmiths’ two young children were at the store at the time and were left physically unharmed. The oldest child called 9-1-1 after the shooting.

Commonwealth’s Attorney Richie Bottoms said a successful suppression could be an issue regarding some of the evidence.

“As a result of at least some of the search warrants involved, there was evidence, we believe, that will be substantial in the proof of our case and chief at the guilt or innocence phase of the trial,” Bottoms said. “That evidence was found as fruits of the search that was issued as the basis of this.”

“Evidence pointing to Mr. Keith’s guilt was gained as a result of that search,” he said.

Bottoms said it was also possible for search warrants to be found invalid and “good faith exceptions” to allow the evidence to still be included in a trial.

“Let me say, I believe that the validity of this affidavit and the search warrant itself is strong. I think the detective did a good job,” he said. The search warrants resulted in “facts that are pertinent and relevant to the case.”

“You want the jury to hear the facts in the case,” Bottoms said.

Bottoms said, despite what happens in regards to the suppression attempt, his plan will not change.

“I never plan to drop the charges,” he said.

The defense line of questioning revolved around the witness testimonies cited in the affidavit; the bulk of the questions specifically related to the descriptions of the suspect and whether or not they were consistent enough.

Statements from 11 witnesses, selected by Cox and read in portion by Peel from the stand, agreed that the suspect was a white male. From there, things varied slightly. Some witnesses described the suspect as being heavy, while others said “not fat but not thin.”

Most statements read agreed that the man had a beard that was a little reddish brown, but the descriptions ranged from “three to four inches” long to “not as long as ZZ Top’s,” from “dingy” to “full.” Some stated the suspect had long hair, but definitive length was uncertain. Some didn’t notice the length of hair.

Peel said the child who reported the shooting stated that the beard appeared “fake.” The child also didn’t recognize the person who committed the act.

Cox also questioned Peel on the clothing worn by the suspect. Most witnesses made reference to some type of jacket, but the description ranged from an “Army jacket” to a “fatigue jacket” to a “camo jacket.” One witness reported seeing the suspect in a long-sleeved, light-colored shirt.

Some descriptions, including that from the child of the Hockensmiths, stated the suspect was wearing a blue hat. 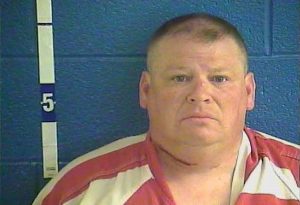 Peel was asked why he thought the descriptions could differ, to which he said that some of the witnesses could have seen the suspect at different times. Overall, he said he felt there was enough consistency in the type of jacket and the beard to pursue the description.

Cox asked Peel about the briefcase listed in the affidavit as possibly haven been stolen from the scene.

The young Hockensmith initially told officers he saw Dan Smith bring only one case in, a brown or black one. In a follow up interview, Peel said, the young child thought Smith may have had a second briefcase, a silver one.

The child also thought that the suspect carried a briefcase out, and a black one belonging to Smith was found at the scene, Peel said.

Two other people interviewed, one done after the search warrants were conducted, said that Smith was known to carry only one briefcase.

When asked why the discrepancy there, Peel stated that because he only carried one at the one store did not mean he would only carry one at another store. It was after the search warrants were obtained and served, he said, that the second interview was conducted, continuing the idea that Smith generally carried one briefcase.

Other questions revolved around the statement from Tracey Herald, a pastor from Michigan who knew Keith and whose testimony has been noted as being of great importance to pointing officers toward Keith as a suspect. Some statements made by Herald to officers later proved to be unfounded, Peel said, such as statements Herald said Keith made to him about a $300,000 lawsuit against Keith involving the Hockensmiths.

Neither Peel nor Cox clarified what truth, if any, was in the statement regarding the money.

Nearing the end of the session, Commonwealth’s Attorney Bottoms asked Peel if he still stood by the statement he signed on the affidavit, which stipulates that the information is accurate to the best of the signer’s knowledge.

When asked why not every bit of information gathered is included in the affidavits, Peel said “the affidavit would have been irrelevant” if they had done so.

After the hearing, Bottoms said, he felt Peel had done nothing wrong in his steps.

“Generally speaking, an officer cannot give misleading evidence and they can’t recklessly disregard the truth. I think it’s clear that Detective Peel did neither of those. He didn’t recklessly disregard the truth. He didn’t purposely give false testimony,” he said. “It comes down to the definition of ‘What do you call consistent?’ If people saw a beard of some type, in my mind, that’s consistent. If some people said it was a longer or a short beard, or a different color, is that a little inconsistent, yea, but it’s not inconsistent in that they saw a beard.”

Bottoms said he felt the description of the jacket was similar in that people saw the same type of jacket, but used slightly varying descriptions of it.

Bottoms said he felt it would not take Peckler long to make his decision. Keith, he said, has been placed on the March 7 docket to appear before Peckler.

“After that, we will proceed to getting a trial date set,” Bottoms said.