A hit-and-run at the intersection of South Second Street and East Walnut Street on Wednesday resulted in an arrest for narcotics possession.

Danville Police were dispatched to the non-injury accident at 5:07 p.m. During the investigation, officers were able to identify the operator of the fleeing vehicle as Marsha Anderson, 39, of Danville. Officers determined she had taken the vehicle without the permission of the registered owner, and had hit a parked vehicle. 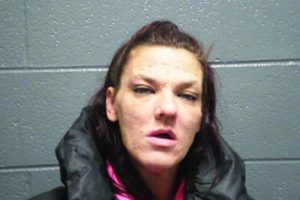 Anderson was found at an apartment complex on East Main Street, where she was attempting to return the vehicle. She was arrested, and was found in possession of a small quantity of prescription narcotics.

Anderson was also served with a Boyle County arrest warrant for sell or transfer of a simulated controlled substance. The Boyle County Detention Center’s website reports Anderson’s bond set at $12,000.