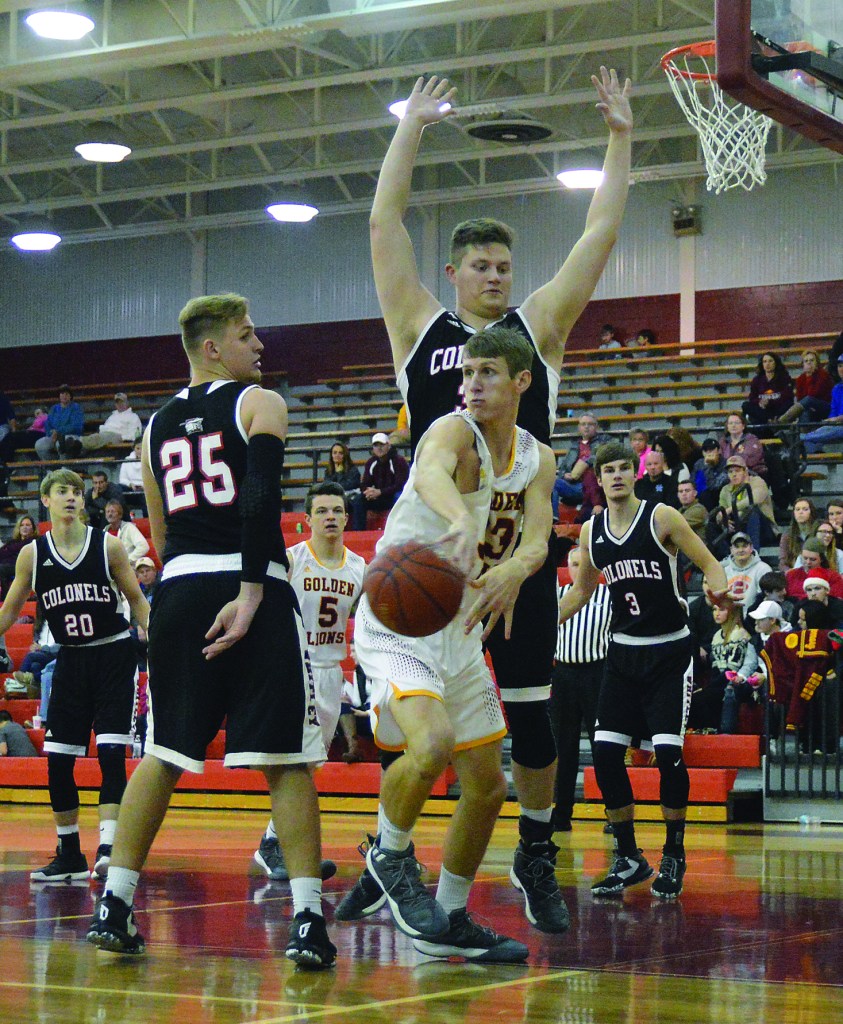 Jeremy Schneider/jeremy.schneider@amnews.com Garrard County's Parker Dailey passes out of the post in the second half of Thursday's game against Whitley County. The Golden Lions struggled in the second quarter and couldn't recover, falling 58-42 for their second straight loss.

LANCASTER — Coaches always fear that one quarter, the one where nothing goes right and the game begins to slip away.

For Garrard County coach Ryan Young, those quarters are becoming all too familiar. The Golden Lions let another game slip away with a stumble in the second quarter of Thursday’s game against Whitley County, falling 58-42 for their second straight loss.

The Lions led 9-6 midway through the first quarter, but from there, they scored six points through halftime as the Colonels built a 31-15 lead at the break.

The second quarter in particular was a nightmare. Garrard added one point to their total over the first six minutes of the quarter, and all four of its points in the frame came on free throws.

“That’s been our m.o. early on in the year,” Young said. “We kind of have a quarter where we just simply cannot put the ball in the basket.

“I told them we have to decide we need to fight for a full game.”

When taking the average of the other three quarters — 14 points per quarter — and replacing the second quarter with that average, it boosts Garrard’s game total to 55 points. It really was one quarter which doomed the Lions (2-5).

The Lions were playing from behind the eight ball when Parker Dailey, their leading scorer and rebounder, went down with his second foul less than 2 1/2 minutes into the game. He sat out the rest of the first half as a 5-2 lead evaporated.

“Dailey has been getting in foul trouble early in games and it hurts us because we don’t have any other bigs to come in and play,” Young said.

Without their only big man in the game, the Lions went to a zone defense, something Young didn’t want to do but felt forced to do. With Dailey out of the game and the Lions in a zone, the Colonels hit three 3-pointers and cut up the Garrard defense.

“When we go zone, we don’t play with enough energy, and that translates to the offensive end of the floor because when you don’t play defense with energy, you have a tendency to settle for quick jump shots,” Young said.

Garrard’s fate changed in the late third quarter when the team adjusted to Dailey being back on the court, finding him in the lane. While Dailey scored only four points — eight below his season average — his presence inside and his passing out of the post helped the Lions score 27 points after halftime.

But it got worse before it got better. Whitley increased its lead to 40-20 with 2 minutes, 12 seconds remaining in the third, prompting a timeout from Young. Brice Burkhart his the second of his three 3-pointers coming out of the timeout, spurring a 7-3 run to close the quarter and chip into the lead.

“Having (Dailey’s) presence inside, we could get the ball inside and kick back out for better 3s,” Young said.

The Lions continued their improved play through the first two minutes of the fourth quarter, closing to within 45-35 on Trevor Jones’ two free throws at the 5:43 mark. After a Colonels field goal, Jones hit two more free throws, but that’s as close as it would get.

“I was disappointed with their effort tonight. I don’t think they came and played as hard as we wanted them to play,” Young said. “And Whitley County played harder than us, and there’s no excuses for a team to drive that far and play harder than us.”

Jones and Brayden Sebastian each scored 10 points to pace the Lions. Jones hit 6-of-8 free throws and scored six points in the fourth, while Sebastian had eight points in the first half. Burkhart hit three 3s for nine points, all in the second half.

“Our guys do not have a great fundamental base, and we worked really, really hard in the offseason to get us fundamentally better,” Young said.

Young pointed to this weekend’s Ellerman Contracting Garrard Holiday Classic, with the Lions opening Saturday against Union County, as another hurdle in the season.

“We’re going to keep working at it,” Young said. “I told them, ‘I’m going to build this thing back up.’ Now I need guys that are willing to fight and be selfless for the team and those type of things.”