Fourth quarter struggles surface for Rebels in loss to LCA 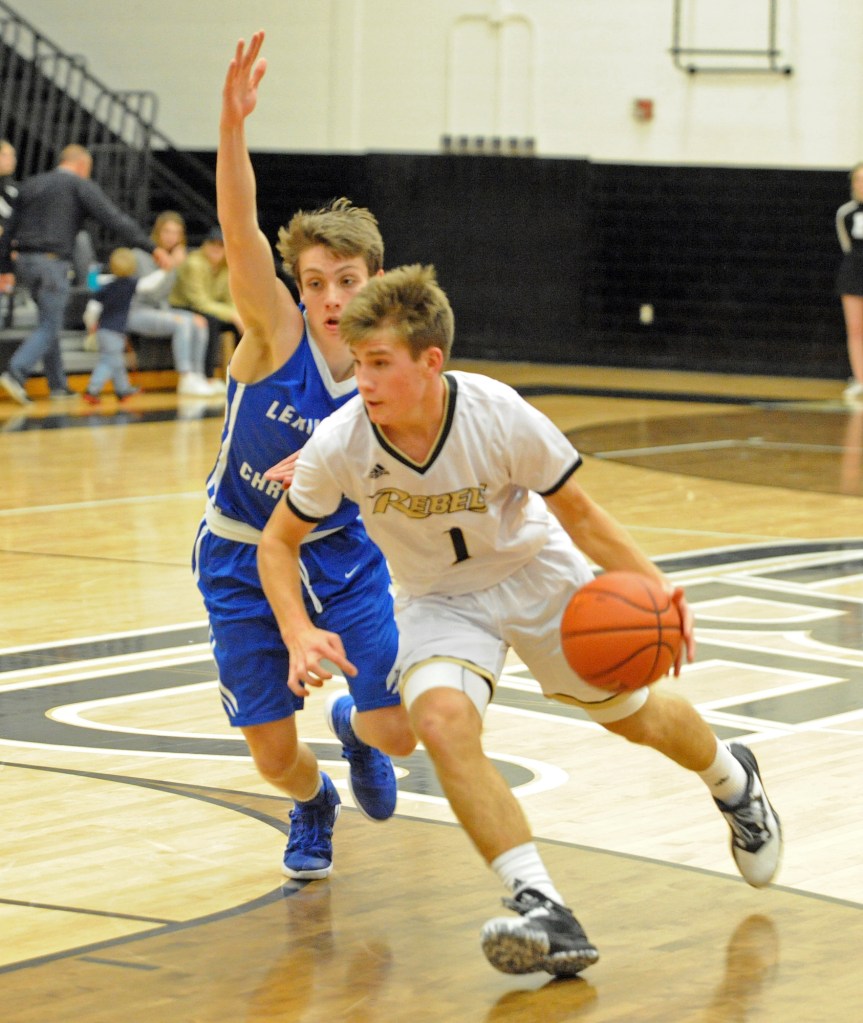 Matt Overing/matthew.overing@amnews.com Boyle County's Reese Smith drives to the basket past an LCA defender. Smith scored a team-high 16 points in the Rebels' loss.

Boyle County was rolling with the punches against Lexington Christian Academy for a majority of Friday night’s game.

But lapses late in the game again cost the Rebels a chance at a victory. Coach Steve Adams said their mental approach to the game is not where it needs to be.

“Very, very disappointing,” Adams said. “Our mental focus and approach is terrible. The things that we work on, things that we prepare for, they’re not carrying over to games. That has got to change. LCA, a top ranked team in the state, we’re right in the game, but we’ve got to develop consistency. We can’t have two good trips and then four bad trips. We’ve got to develop a mental IQ and mental picture of what we’re supposed to be doing and understanding and do it right every time. Until we get that, it’s going to be tough.”

The opening minutes of the game were indicative of that lack of mental focus. Adams called two timeouts in the first five minutes because LCA had six offensive rebounds in that short span.

“We had to waste two timeouts in the first quarter to stress boxing out and going and getting the ball with authority,” Adams said. “Things we practice on, getting ready for them and things we talk about in pregame that we’ve got to do, how do you not carry that over to the first two minutes of the game? That’s the mental approach that they’ve got to get through.”

Adams said the two things he and his coaching staff stressed in practice and in the pregame were taking care of the basketball and limiting second-chance opportunities. Boyle had 14 turnovers, down from their season average, but still too many against one of the top teams in the state.

“I think we can play with any team if we do the right things,” Bryce Slone said. “We’ve got to make shots and we’ve got to make the right decisions. Turnovers, like this game was our best game for turnovers. On the season I think we’re averaging around 20. Fourteen this game still isn’t a great number but it’s a lot better than 20. I think tonight was a big step with that.”

Boyle’s offense was firing in the second quarter, scoring 21 points to keep the game tight — the Rebels trailed 39-33 at halftime. Part of that was due to Slone hitting another buzzer-beating three to end the half on a high.

Slone scored 16 points in the win, second to Reese Smith’s 19 points on the team. Smith has developed into Boyle’s second scoring threat behind Slone, averaging 12.7 points per game.

Adams said that Smith’s struggles come from him being a freshman and not having much time in the gym so far this season.

“He’s a freshman, he’s going to make mistakes,” the coach said. “We’ve got to get him to learn, he wants to settle sometimes for that three. He’s hitting some but his strength is attacking the basket. That pull-up jumper he’s got in there, he does great. He’s still three, four weeks in after football, probably still not in basketball shape. Definitely still doesn’t understand everything that we’re trying to do. But he’s been playing hard. He’s one, just like everybody else, has got to understand what we’re trying to accomplish.”

Smith was tasked with guarding one of the top sophomores in the state, LCA’s Kyle Rode. Rode finished with a game-high 21 points, six assists and five rebounds. Adams said he wanted his team to attack LCA’s star player when he picked up his second foul.

“We had two fouls on Rode early in the second quarter and we wanted to attack, and four straight times, we don’t,” he said. “There’s things that we’ve got to understand and know. Some of that will come with experience, some of it will come with an understanding of the game.”

Boyle (2-4) faced two major challenges in North Hardin and LCA, two teams that would be considered heavy favorites against the Rebels. After playing the games, though, Adams said his team could’ve been in a position to win both.

“Not knowing how the games would go, just looking at the scores and knowing their reputations, their ranks, I would’ve felt pretty good,” Adams said. “But after playing them, I don’t feel real good. North Hardin, two minutes to go in the game, we’ve got the ball twice down six. We’re in the game, chance to win. Here, through three quarters we’re right there, eight, 10, points, anything can happen. After seeing us play, we could’ve had a chance to win both. I’m disappointed in our effort with those.”

Slone said that if they execute, the Rebels have a chance to hang with any team. But so far this season, they have struggled down the stretch.

“We can play with any team, we shouldn’t let the game go away in the fourth quarter,” he said. “It’s just lapses in certain plays where we don’t do the right things and it hurts us, we give up a few shots in a row and then the next few possessions we’ll do really good again.”

Now, Boyle will enter the winter break with a heavy dose of holiday basketball.

“We need practice time more than we need games,” Adams said. “We’re coming in Sunday to practice, we go to Glasgow on Monday, we’ll practice on Tuesday, then we’re playing a Mercer tournament on Wednesday, Thursday, Friday. Then we go to a tournament at Montgomery County. I really wish now that we’d only done one tournament so that we could have more practice time. But we don’t, that’s the schedule, that’s what we’ve got to do.”