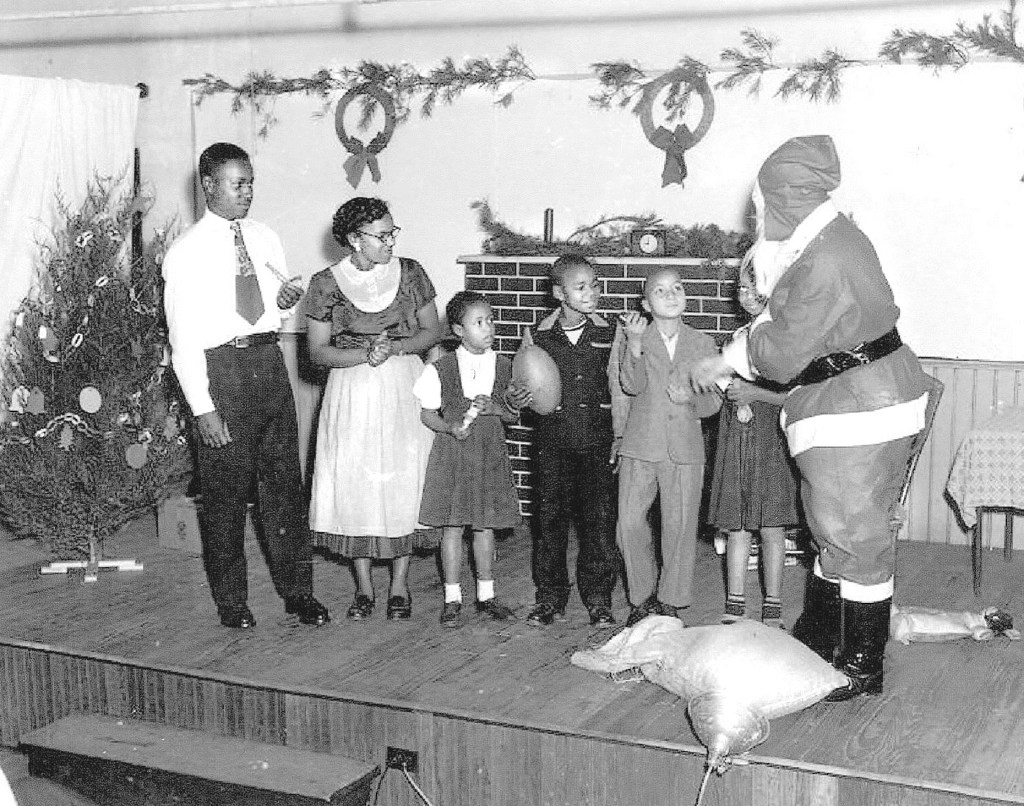 By JoAnn Hamm
Jacobs Hall Museum Staff
In 1874 Kentucky School for the Deaf began publishing a weekly in-house newspaper, the Kentucky Deaf-Mute, to give the male students an opportunity to learn the printing trade. KSD published the newspaper continuously from 1874 to 2004 with only a name change in 1896 – to the Kentucky Standard. From 1883 until 1942 George M. McClure was the editor of the paper. His relationships with students and wide connections with deaf schools throughout the country enabled him to create vignettes of student and staff life that help us understand how Danville touched the lives of students and staff at the school. 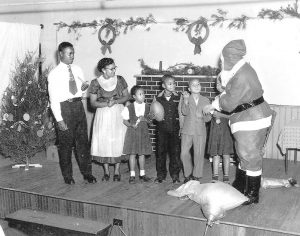 Christmas at the Institution, 1896 — From The Kentucky Standard, January, 1897
School closed Thursday, and Friday was devoted to preparations for Christmas. Saturday morning at 10 o’clock the pupils assembled in the chapel to welcome a belated, jolly saint, the genuine Santa Claus. The stage and scenery had previously been erected, and when all were comfortably seated the curtain was raised and after a short interval old Santa, deer and all, dashed across the stage, his wagon heaped high with gifts destined to gladden the hearts of the pupils in a short while.
Then the curtain went down. When it rose again there was a fireplace and chimney and directly afterward the Christmas Saint wriggled down out of it and made a tour of the room, filling the stockings of some of our little ones, hung to the mantle. He was rather stumped when he discovered a whole house full of children who evidently expected him to do something for them but rallied himself and invoked the presence of a number of “imps” who thereupon came scrambling down the chimney and were deputized to distribute the presents as fast as they were passed down. Each pupil was remembered with a large box or good things. Then after a talk with the children, which was not the least entertaining part of his visit, he climbed up the chimney and took his departure.
Then boxes from home were given out and the happy recipients retired to explore the contents. The Christmas dinner was all that such a dinner should be and, as to the appetites, we will only say that, when it was over, the tables looked like a field of Egypt after the locusts had been through it.
Sunday morning an appropriate thoughtful lecture was delivered by Mr. Argo in the chapel. Monday evening a pleasant sociable was given to the pupils in the parlor. Wednesday evening a masquerade was given. About thirty pupils and a number of officers appeared in costume. Many of the costumes were very amusing and all of them were good. The unmasking created much merriment.
Thursday night Rip Van Winkle was rendered in the chapel by our playing club, under the management of Mr. Yeager. The play was well performed and afforded much amusement. There were several impromptu pieces, a most amusing one being a carpetbagger who opened his grip-sac and displayed his plunder to the audience, and wound up by making a Republican campaign speech.
The rest of the time passed pleasantly, nothing occurring to mar the enjoyment of the holidays. Pupils will long look back to this week as one of the brightest that ever came into their lives.
NOTES — Professor Leviticus Eddy personated Santa Claus and wriggled down the chimney with skill and grace. The parlors looked very handsome in their Christmas decorations.
Christmas at KSD, December 1929 – from The Kentucky Standard, January 1930
We wish to acknowledge Christmas gift donations from Miss Hardy’s Deaf Club of Louisville and Mr. Jere C. Caldwell of Danville. This money was used in providing gift boxes for those children who received nothing from home. We thank them for these generous gifts. We also wish to thank Ryan Commandry of Knights Templars for the entertaining of our children on Christmas afternoon at a picture show party and ice cream parlor. This treat was greatly enjoyed by all the pupils of the school.
About one hundred pupils spent the holidays at home. In a number of cases where the home was too far away to make it convenient for the pupil to make the journey they went home with school friends who live close by. Nearly all have returned. 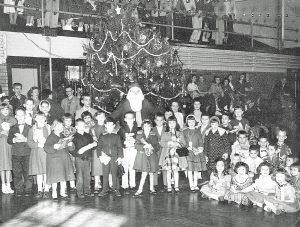 Santa’s Visit to Rogers Hall in 1958 – The younger children gathered in front of the big tree in the gymnasium (Rogers Hall) to welcome Santa to the KSD campus. The pupils began leaving for a two-week Christmas vacation just after Santa’s visit.

From the Girls’ Side
The snow fell about five inches deep just before Christmas. It was a beautiful Christmas snow. We had not had snow on Christmas for several years. We love a white Christmas.
We had a fine Christmas dinner and had big turkeys for dinner. We went to shows four times during our holidays. Oh! We enjoyed them very much. We had big boxes from our homes.
We went to Stout’s Theatre on the afternoon of Christmas Day. Gerthel Turner won the prize of a wrist watch. She is a lucky girl as she never has had a watch before. She is very happy over her good fortune.
Tinie Combest, Reporter
Christmas Activities at KSD, from The Kentucky Standard, December 1930
We will have a brief Christmas Vacation here beginning Wednesday the 24th at 12:45 o’clock p.m. and continuing until Monday morning, December 29th, at 7:45 o’clock when regular schoolwork will be resumed. Parents who desire to have their children at home between those dates can arrange with the Superintendent as to the time of leaving and return.
There will be a Christmas tree for all the pupils, big and little, in the gymnasium Wednesday morning, the 24th, at eleven o’clock.
At seven o’clock Christmas Eve, Dickens’ great Christmas story — with Old Scrooge, Bob Cratchit, and Tiny Tim — will be shown by Mr. Beauchamp, after which Santa Claus will appear to reward the good boys and girls.
On Christmas morning boxes will be given out and at noon a fine Christmas dinner will be served. At two o’clock all the pupils will be given a picture show party at the Kentucky Theatre. Thursday evening there will be Christmas games in the gymnasium.
Friday afternoon there will be another picture show party for the pupils at the Kentucky Theatre, and in the evening supervised play in the gymnasium.
On Saturday afternoon there will be “movies” in town from 1: 30 to 3:30. From 4:00 to 6:00 the Christmas party for the younger children will take place. At 6:00 o’clock a plate dinner will be served. The older pupils will have their Christmas party from 7:30 to 9:30.
On Sunday morning there will be a service in the chapel at 10:00 o’clock. Committees have been appointed to have charge of each feature of the program and their members are   responsible for carrying it out. A merry Christmas is surely in store for our young people.