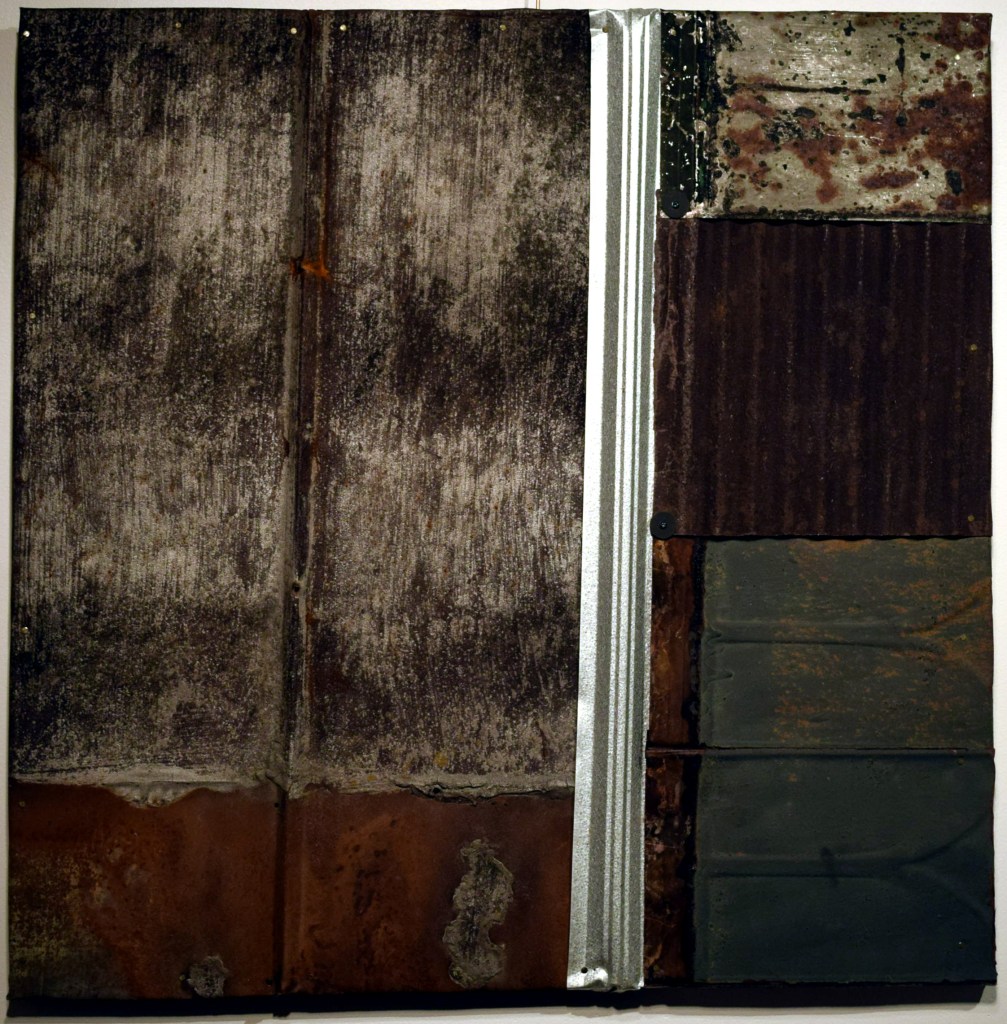 Roofing tins, aged metals, thrown away paper goods … Some wouldn’t look at any of these materials as possible pieces of art. Brandon Long does.

Long may be best known as the program director of the Community Arts Center, or maybe a creative consultant for West T. Hill Community Theatre. What some may not know is he’s a highly respected artist in his own right.

Long’s most recent creative endeavor is the focus of a new exhibit up through the end of this month at The Lexington Theatre Gallery in Lexington, called Reclaimed. 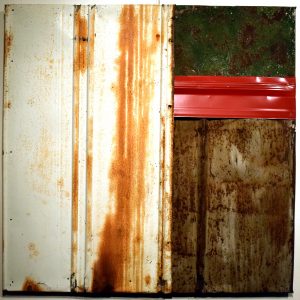 “I have yet to go to the store to buy pieces of metal for these art works …” Long says, referring to all of the pieces being made from reclaimed elements — for metal or paper collage materials.

“I use the roofing tin and aged metals that I find, whether it be from the side of the road or a ‘gift’ from someone that has recently torn down a barn or had a roofing project.”

The inspiration for this particular series, he says, actually began as his attempt at making Kentucky art. He visited the Kentucky Artisan Center in Berea, was looking around and wondered how he could make art that would be considered a “Kentucky” product without resorting to painting horses or traditional crafts.

“I was thinking, ‘How can I get in here?’ I’ve always been about using found materials, and I knew that roofing tin was fairly easy to come by, as a lot of the barns and other farm structures were falling into disrepair. It took a while, but eventually my work was featured in the Artisan’s Center’s exhibit about recycling.” It felt good to come full circle, he says, and see his idea reach its realization.

From fairweather to a home

Where his own realization goes with knowing he wanted to be an artist, Long didn’t have to think long.

“I was telling my classmates when I was in kindergarten that I was an artist …” Long says. He’d placed in a few coloring contests — “I even won $10 at Walmart …” — and at the time, he thought he was the real deal. 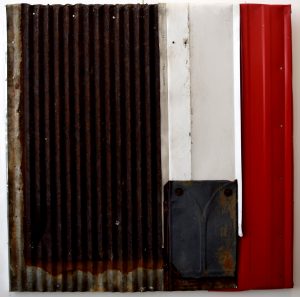 “I guess I’m still trying to live up to it.”

All of the pieces in Reclaimed are recent — the majority being made over the past year. Long says since moving his workspace for this particular endeavor into the basement of the Arts Center, he’s been able to get a lot more done.

“Before then, I was working on these pieces at home, in the driveway. I’d have to be a ‘fairweather’ artist — only working when the weather wasn’t too hot or too cold, when my allergies weren’t out of control, all while wearing a long sleeve shirt to keep the mosquitoes from biting, because I am apparently delicious.”

He says working in the basement of the Arts Center, he’s able to go downstairs and work on my lunch hour, or hit the studio hard on a Saturday. “Having an accessible and ever-ready space is critical to keeping busy as an artist.”

Long says those who love his art hail from two opposite ends of the spectrum.

“Some love it because they love old, traditional barns while others are attracted to its modern sense of minimalism.  On one hand, you could compare it to quilting, and on the other compare it to a painting by Mark Rothko. I try to let the materials speak for themselves and don’t add my own colors.  I’ll mix in some newer tin from time to time to really add a pop of variety in the color and texture.”

Long says he thinks like a farmer, repairing a hole in the side of a shed: he has to cover the space and tries to make it look somewhat aesthetically pleasing in the meantime.

“I just beat the metal into submission around the wood frame, folding over the corners like you might when you’re doing upholstery or making a traditional painting canvas. It’s a pretty good workout — a bit like CrossFit, but instead of beating tractor tires with a sledgehammer, I’m making art.”

Long’s pieces run from $300 for a 36-inch square and $200 for a 24-inch. Because of their durable materials, they can also be displayed outdoors.

“Most of my clients have chosen to hang their work on their porches, maybe garages, and I think that ‘outdoor’ element appeals to collectors who may have already filled the interior walls of their home.”

Reclaimed, featuring pieces by Brandon Long, is up through

December at The Kentucky