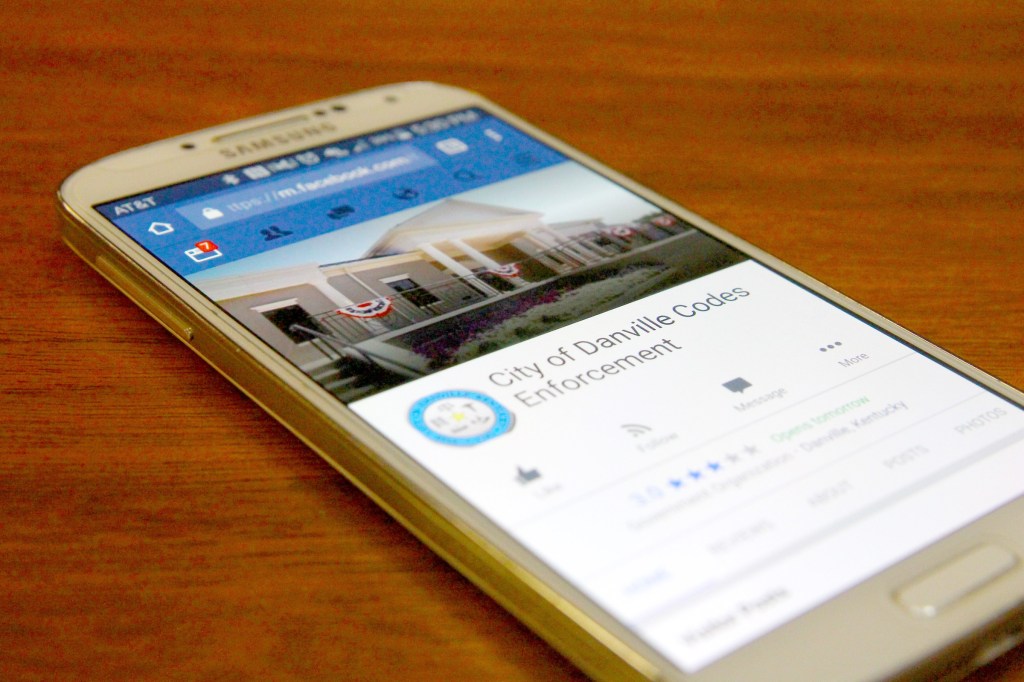 Ben Kleppinger/ben.kleppinger@amnews.comThe City of Danville Codes Enforcement Facebook page is seen on a mobile phone. In early December, Codes Enforcement began publishing photos of properties found in violation of codes, along with addresses and names of owners. That practice is now on hold after City Commissioner Denise Terry raised concerns.

Danville Codes Enforcement had begun taking to social media with photos of properties cited for violations, but the move didn’t sit well with at least one city commissioner and is now on hold.

Earlier this month, Danville Codes Enforcement began posting property violations and lists of condemned properties on its Facebook page. The posts were also appearing on the main City of Danville’s Facebook page.

“I’m not sure that’s the message we want to send,” Commissioner Denise Terry said last week during discussion of codes enforcement at a city commission meeting.

But she said she was concerned when she saw the posts and then received a call from a citizen who raised concerns, as well.

“What if the wrong information is posted?” she asked.

She said when she made the suggestion to use social media as a tool, her idea was for it to be used to look for owners of properties and gather other information.

“I’m not sure if posting them to call somebody out is what we are trying to do,” she said. “I know we didn’t want that when we asked for social media.”

On Dec. 8 and 9, Danville Codes Enforcement began posting photos to its Facebook page of properties that were in violation of codes.

One such post on Dec. 9 listed an address and the owner of a North Fifth Street property and included photos of the property and a caption reading, “Trash, garbage and debris, abandoned vehicle, unhitched trailer on street, trailer blocking sidewalk. 30 days to abate nuisance, 10 to abate abandoned vehicle.”

City Attorney Stephen Dexter said at last week’s commission meeting that one reason for having a codes enforcement board is to “shame someone” into compliance.

Dexter said codes violations are extremely sensitive situations. As far as posting the violations on Facebook, he said, “while there could be benefits, some may respond positively or negatively.”

The City of Danville Facebook page shows others what’s going on in Danville, he said, and it’s not always going to show the good things in Danville.

Terry said that to have the violations and condemned properties listed on the city’s website is one thing, but to have them individually shamed is another.

“I felt that approach was not what we were looking for,” she said.

The city commission has been discussing code enforcement during the last few months during city meetings, as they prepare for new state laws that will affect how code enforcement is handled.

An issue brought up in previous city commission meetings is that the public is not aware of what properties have been either noted for violations or have been condemned.

At a special called meeting in November to discuss enforcement, city commissioners had several concerns such as making sure the city’s list of condemned properties was up-to-date and posted; what to do about repeat offenders who aren’t keeping up their property; and making sure everyone is educated and understands the codes.

“I thought it would be another way to let the public know what we do, with pictures, keep them up to date as we go forward and hope it helps us with enforcement, as well,” Danville’s Codes Enforcement Director Bridgette Lester previously said.

Lester said since the commission discussed the Facebook posts at the last meeting, they have decided to hold posting property violations until the issue is discussed further.

However, there has been an updated list of condemned properties posted, she said.