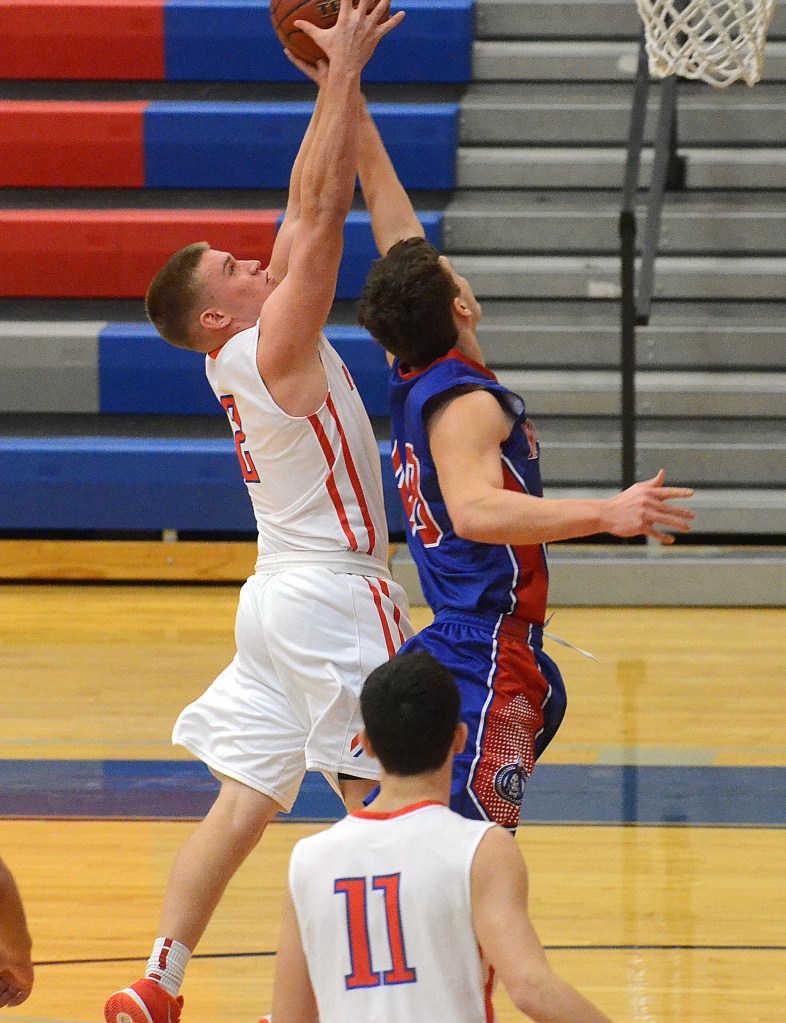 TANNER MCANINCH of Lincoln County gets up above Hayden Chism of Montgomery to claim a rebound in the Patriots' 55-41 win in the Clash of Titans Tournament. Photo by Nancy Leedy

HARRODSBURG — All went according to plan for Lincoln County on Wednesday afternoon as the Patriots won their opener in the Farmers National Bank Clash of Titans boys basketball tournament at Mercer County, downing Montgomery County 55-41 to advance to the winner’s bracket.

“We told our kids tonight when we got in here (locker room) after the game, ‘We’re going to the side of the bracket where we want to be on,’” Lincoln coach Jeff Jackson said. “We needed to win to get to that side (winner’s bracket) and we did.”

While happy with the win, Jackson wasn’t pleased with how Lincoln played the game, saying the team experienced a huge energy crisis.

“We didn’t have it (energy) and it made it seem like the game went on forever and ever,” he said. “We didn’t have any energy like we need to have. Like the energy we had in the Bryan Station game. Like we’ve had the last couple of games. Being out of school and being out of our routine could have played into that. But we won and that’s the main thing.”

Devin Alcorn and Noah Young shared high-scoring honors in the game, leading Lincoln (6-2) to the win with 22 points apiece. Alcorn was 8-for-17 overall and Young, who also had five assists, was 7-for-14.

“Devin and Noah are both playing well and shooting the ball well,” Jackson said. “We didn’t shoot the ball from outside the way we have been, but they both had good games.”

The senior duo produced all the Patriots’ points in the first quarter. Young drove inside for back-to-back buckets and followed with two free throws for a 6-2 Lincoln lead, then Alcorn interrupted a Montgomery run with a quarter-ending 3-pointer to deadlock the game at 9-all.

Montgomery (2-7) rolled off seven straight points before the Alcorn 3-pointer to take a 9-6 lead. Evan King scored with a putback, Myron Ralls hit from 3 and Brennan Canada, who led the Indians with 17 points, sank two free throws.

Montgomery, which shot 42 percent overall, going 13-for-31, 4-for-17 from 3-point range, froze over from the field early in the second quarter, missing its first five shots. Lincoln, which was at 49 percent, 19-for-39 overall, 6-for-18 from 3, also struggled offensively early in the period but Young did get in the lane for a bucket and Alcorn bombed in a 3-pointer to put the Patriots on top for good, 14-9, with 3:33 left in the first half.

Canada ended the Indians’ scoring drought with 3:09 on the clock, hitting from 3-points out, only to have Alcorn answer with a putback, Nick Noland hit inside and Young nail a 3-pointer just before the buzzer for a 21-14 Pat lead at the half.

Lincoln used a 13-8 scoring run to extend its lead to 12 points in the third quarter. Chase Phillips and Alcorn put up four points apiece in the run and Young had five, going baseline with 2:11 left in the period to make it 34-22.

But Montgomery would whittle away at Lincoln’s lead in the waning moments of the third. Canada put up a jumper, Dillon Young drained a 3, then Pharoah Davis converted on a three-point play to get within 34-30.

The Indians wouldn’t get any closer.

Alcorn drained the third of his four 3-pointers in the game at the end of the third quarter then Lincoln outscored Montgomery 18-11 in the fourth quarter to secure the win.

“Montgomery County did a lot of things to us,” Jackson said. “They did some matchup. They jumped us. They played some zone. They played some man. They pressed us. I thought we handled the pressure pretty good. We moved the ball and got some easy shots around the basket and we got the win. And we’ll take it.”

The Indians picked up a win on the glass, outrebounding Lincoln 22-17. Canada and Davis each had four boards for the Indians. Phillips led the Pats with six boards.

“I thought Tanner (McAninch) and Chase rebounded well. Two of the smallest kids we have and they’re leading us in rebounds,” said Jackson. “Carlos Nunez and Nick (Noland) and Blake (Smith) all played well tonight and did some different things for us.”

Lincoln will face Muhlenburg County at 6 p.m. today in the night’s first semifinal. The Mustangs advanced to the winner’s bracket with a 76-72 win over Knott County Central.

“If we have the energy level against Muhlenburg that we had tonight, we’re in for a long night,” said Jackson. “We got a chance to see them play the first game earlier and they are really, really good. We’ll have to play a lot better, but I feel we will. I feel like our kids will come out and have a little more energy, a little more focus.”

DEVIN ALCORN of Lincoln County dribbles around Brennan Canada of Montgomery County in the first half of the Patriots’ 55-41 win over the Indians in the Clash of the Titans Basketball Tournament at Mercer County. Alcorn and Noah Young led Lincoln in the win with 22 points apiece. Photo by Nancy Leedy

TANNER MCANINCH of Lincoln County gets up above Hayden Chism of Montgomery to claim a rebound in the Patriots’ 55-41 win in the Clash of Titans Tournament. Photo by Nancy Leedy

LINCOLN’S Carlos Nunez powers his way inside against Montgomery’s Hayden Chism during the Clash of Titans Tournament at Mercer County. Photo by Nancy Leedy

LINCOLN’S Noah Young looks for an open man after getting trapped by Montgomery’s Tucker Norris and Pharoah Davis in front of the Patriot bench during the Clash of the Titans Tournament at Mercer County Wednesday. Young and Devin Alcorn had 22 points apiece in Lincoln’s 55-41 win. Photo by Nancy Leedy