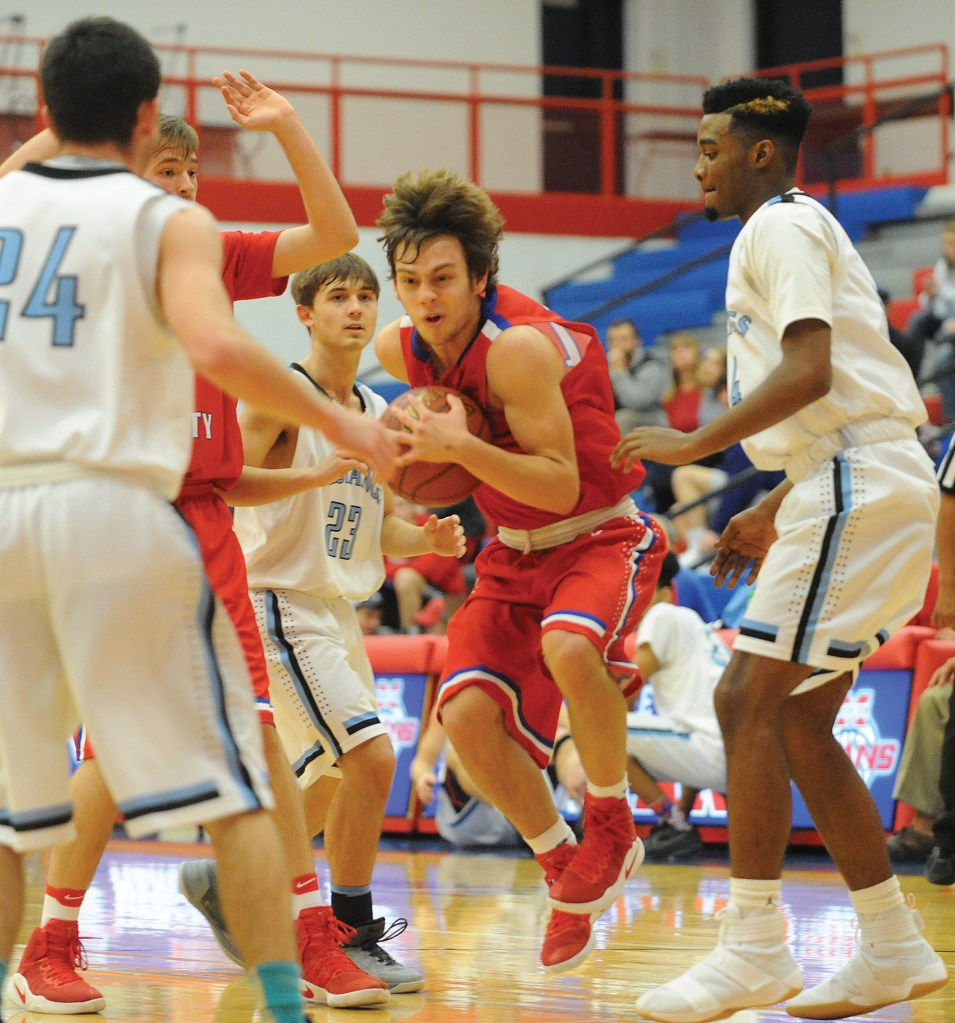 The Patriots held on for a 73-70 shootout, a game where neither team had a significant lead.

“We had energy tonight, and you have to have it against Muhlenberg,” Lincoln coach Jeff Jackson said. “Kerry Stovall’s teams play so hard, and they’re one of the favorites in their region. They’re very, very good and they can shoot the lights out and they play hard. It’s a great win for us because we knew we would have to play hard tonight.”

Both teams jumped out of the gate, scoring a combined 26 points in the first five minutes. After one quarter, Lincoln led 22-19 behind Noah Young’s 12 points.

Muhlenberg controlled the pace in the second quarter, taking a 34-33 halftime lead. Young led all scorers at the break with 18 points.

But Young didn’t have as many looks in the second half, scoring just seven points to finish with a game-high 25 points.

“They just came out and put a lot of ball pressure on me,” Young said. “I just penetrated and started kicking it out to my guys, because they’re going to hit big shots. That’s what they did.”

Lincoln turned to junior Chase Phillips and senior Tanner McAninch to take some of the scoring load off of Young and Devin Alcorn, and the upperclassmen stepped up. Phillips and McAninch each had 10 points, all but two of which came in the second half. Alcorn finished with 18 points, going 6-for-7 from the foul line.

“We told our kids, we have to have other people,” Jackson said. “… Tanner and Chase have been scoring for us all year, till last night. They’re going to have to continue that. They hit big free throws down the stretch, too. When we’ve got four kids, and Blake (Smith) coming off of the bench that can score for us, it really helps us on the perimeter. … When we’ve got four kids scoring, it opens things up for Noah to get in the lane.”

“Carlos played his tail off tonight,” Jackson said. “He beats, battles and bangs in there and rebounds, and he communicates in the back of our zone and our man. He’s a senior. He’s waited his turn and worked hard and is really having a good year so far.”

Lincoln’s win sets up a 12th Region showdown with the host Mercer County today, something that Young is looking forward to.

“We’ll get to see what they’ve got, and we might play them in the 12th Region championship game, so it’s a good challenge for us,” he said.

Jackson, speaking before Mercer beat Boyle, said that either team would be a great challenge.

“They’re two of the top teams in our region,” the coach said. “The rivalry with Boyle is second to none and Mercer is really good, coach (Kurt) Young has come in and got them energized and playing well. They had a great year last year and they’ll be right in the thick of it this year when it’s all said and done. It’ll be tough, both teams are very good and well coached. We’ll have to have the same type of effort and energy that we had tonight.”