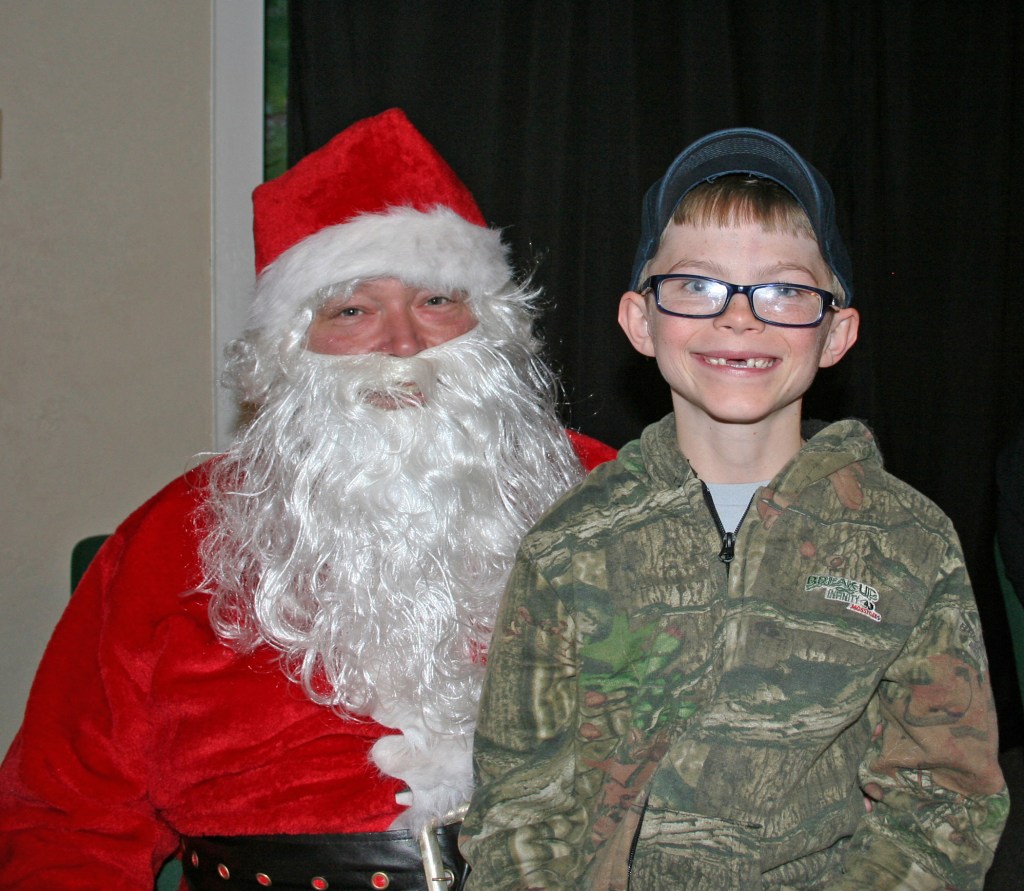 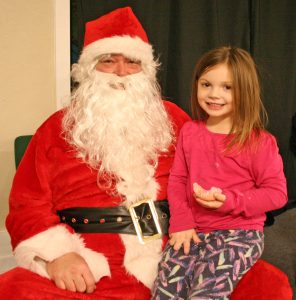 There’s a glow on the face of a little girl, smeared with pink frosting from the cupcake she’s eating, which matches the shirt she’s wearing, as she talks with Santa, grinning from ear to ear as he talks to her.

That glow is what makes Bruce Coffman of Junction City don a Santa suit time after time.

“I love watching the kids,” Coffman said. “The look on their faces — they love Santa.”

He spends time talking and taking photos with the children, and the little girl comes back a second time, enthralled with the man in the red suit and white beard.

Coffman, 46, has been portraying the big man in the red suit for about 10 years, following the footsteps of his father, Donnie.

“I worked at Trim Masters for 18 years; I started there, playing Santa for the parties,” Bruce Coffman said. “I’ve done it for my kids and grandkids.”

No matter what’s going on, he said, it’s always easy to get in the spirit when it’s time to put the red suit on.

“When I get that suit on, when I see those kids, I’m in the zone,” Coffman said.

There are perks to the job, he said. Besides the happiness and Christmas cheer that comes with being Santa, Coffman said he’s gotten to ride in a few parades in Junction City and Perryville, sometimes in a fire truck.

And Santa always eats for free at the parties he visits.

There are never any bad parts, he said, although a kid did pee on his leg once, Coffman said with a laugh. On the other side, Coffman said it was hard to pick his favorite moment, too.

“One favorite time… there have been so many kids — I don’t know if I could point out one,” Coffman said.

Although, he said, he loves to take the opportunity to visit Ephraim McDowell Regional Medical Center on occasion.

“They all love when Santa comes to visit at the hospital,” he said.

When he’s not Kris Kringle, Coffman can be found at Coffman’s Tire Center in Junction City, where he works.

He also uses his free time to race radio cars, traveling to Louisville, Corbin, Hazard and even Indiana.

He got started at the age of 15, and has been racing them ever since, along with his brothers Brian and Todd, who has driven race cars at Ponderosa Speedway.

“I’ve won a few. I’m pretty good — I like to consider myself ‘good,’” Coffman said, laughing.

It’s a year-round sport. The nearest tracks are in Corbin and Louisville, he said. There used to be a track at Gwinn Island, which has closed; and a good friend, the late Homer Smith Jr., used to own one at Ottenheim.

“He was a big part of RC racing,” Coffman said.

Coffman’s not on the “professional arena,” but said there are some who travel around the world to race the cars.