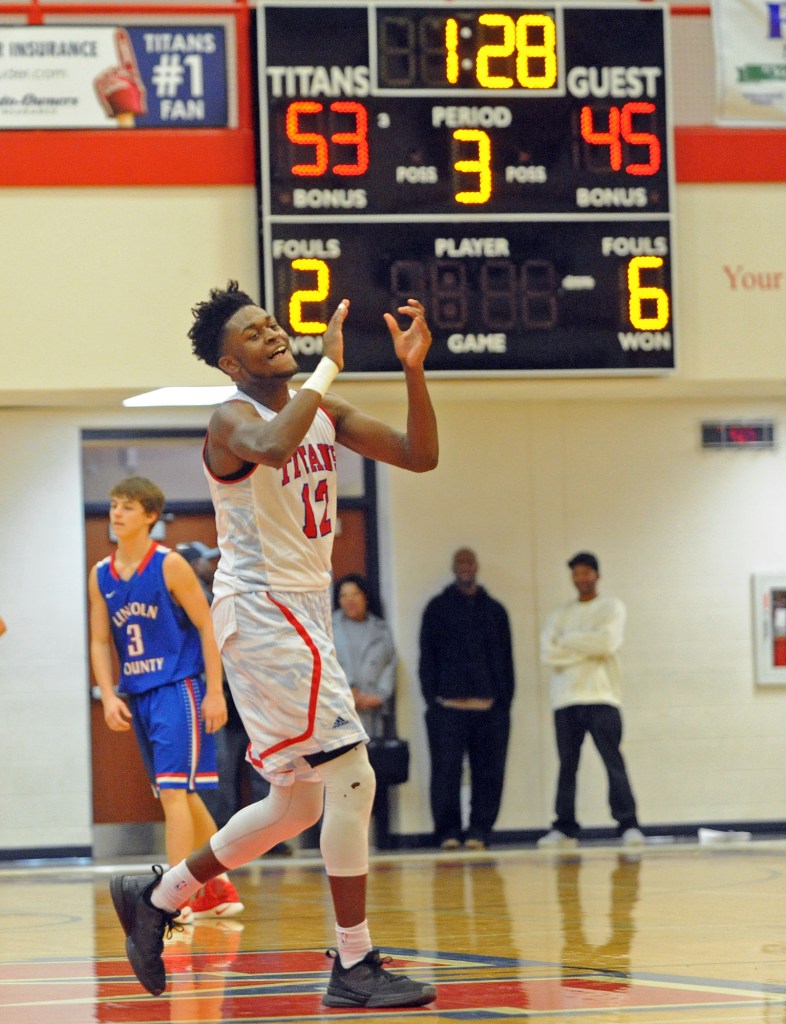 HARRODSBURG — Two of the top 12th Region teams squared off in a championship game on Friday at Mercer County.

It wasn’t for a region title, but instead for the Farmers National Bank Clash of Titans crown, hosted by Mercer County.

Lincoln County played the hosts tough through the first two quarters, but the Titans wore down their opponents, scoring 48 points in the second half en route to a 76-60 victory. Trevon Faulkner led the way, scoring a game-high 33 points to take home tournament MVP honors.

“He does so much other stuff, too,” Mercer coach Kurt Young said. “He’s so unselfish. I didn’t realize he had that many points, but he’s continually growing. I think the great thing about him is that we don’t think that we’ve seen the best of him. There’s a lot of room for growth and I think he’s going to continue to work toward that.” 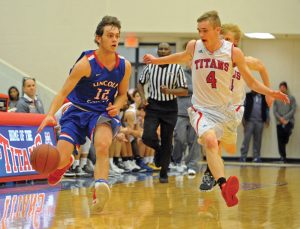 “I went up after to the book to check it out because I thought we did a heck of a job on him and he had 25,” coach Young said. “I think we did an unbelievable job on him and the kid still has 25. He’s a phenomenal high school player. He just knows how to play, how to score, he’s got a motor, he’s crafty. I’m glad I only have to see him for one year.”

Despite having a lead at the end of the first half, Patriots’ coach Jeff Jackson said his team uncharacteristically left points on the floor.

“First half, we were 6-for-14 from the free throw line. That’s a focus thing,” he said. “Missed layups, didn’t shoot the ball well. Last night, we were 22-for-26 from the line, today we finished 8-of-16. We didn’t defend well, we didn’t get stops when we needed to and they killed us on the glass. It was 39-22 on the glass and they had 12 offensive rebounds. You can’t win championship games getting out-rebounded 39-22. You can’t shoot from the line like that.

“If you are doing those things, you’re going to have to guard your tail off, and we didn’t do that. We stood a lot and let them get baseline on us. We just didn’t have an A game, and they had something to do with it. I thought they played really well, Trevon can play. Great kid and tremendous player.”

Lincoln’s strong start waned in the second half, when Mercer ramped up the pressure and started to find more and more openings in the Patriots’ zone defense.

“We’ve had two tough games, competitive games against Montgomery County, and the game last night against Muhlenberg was a war,” Jackson said. “Our intensity level was not what it needs to be to play the caliber of opponent in a championship game on their floor.”

Mercer’s lead was compounded by fouls on key Lincoln players — Carlos Nunez and Devin Alcorn each were in foul trouble, with both fouling out in the fourth quarter.

Gunnar Gillis was a recipient of many fouls, and more than once he finished through contact to excite his teammates.

“He did a great job, Gunnar has always been a great finisher for us, he’s got good, solid moves and he works so hard,” coach Young said. “He’s been in some foul trouble, but games where he’s not in foul trouble, he can really produce. Our guys did a good job of getting the basketball to him.”

Later in the game, the Titans were trying too hard to keep the tempo high when coach Young wanted his team to take their time and milk the clock. 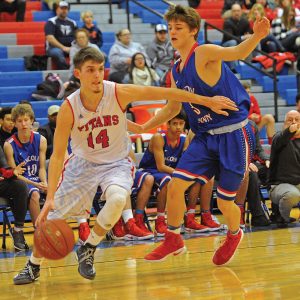 Matt Overing/matthew.overing@amnews.com
Rhyan Lanham drives baseline during the first half of Friday’s championship game against Lincoln County. He scored five points in the Titans’ victory.

“We would take those turnovers at any point in the game, because they were being unselfish, they were aggressive turnovers,” the coach said. “That’s one of those Catch 22s, if we catch it and we finish, everybody’s happy. But we have to learn how to play with a lead. It’s experience, we only really have one experienced guy back, these guys are in new situations. When we play our style, it’s very hard to slow down. They did a tremendous job of adjusting to that tonight.”

Coach Young also credited his guards for helping slow down Noah Young, who scored nine points in the second half.

“Carter Baughman has really been stepping up to the challenge on that, especially defensively,” coach Young said. “I thought Jon Dunning did a great job. And that’s what we try to do, give Noah even more credit. We were sending two guys at him all night, trying to make other people beat us. And they have some shooters, we were lucky they were missing some shots tonight.”

Mercer’s lead ballooned to double figures late in the third quarter, leading 55-45 entering the fourth. A strong press offense and free-throw shooting put the game away for the hosts.

Although a fifth-straight win would have boosted his team further, Jackson said he likes being 7-3 after such a tough start to the season.

“We’re 7-3 with a heck of a schedule so far,” Jackson said. “I would have liked to have won this thing tonight because I think winning championships helps you win championships. But we’re 7-3, I think overall our kids are playing hard. But we’re going to get better, we’ve got to create some more depth. We’re playing seven kids for the third night in a row.”

Coach Young said he wanted his team to celebrate the win but it won’t be long before they’re back in another holiday tournament: The Titans travel to Campbellsville for the Campbellsville High School Holiday Classic next week.

“That’s been our biggest thing, we don’t talk about wins and losses, we don’t worry about our record, it’s the end of the season, building toward that,” he said. “It’s the ability to get better. That’s the great thing, I don’t think we played great tonight, but we did win. We’re learning from it. I think we still have a high ceiling on how much better we can get. I think our football guys, especially Trevon, are still getting into shape. That’s what I’m most excited for, we have an opportunity to get better.”