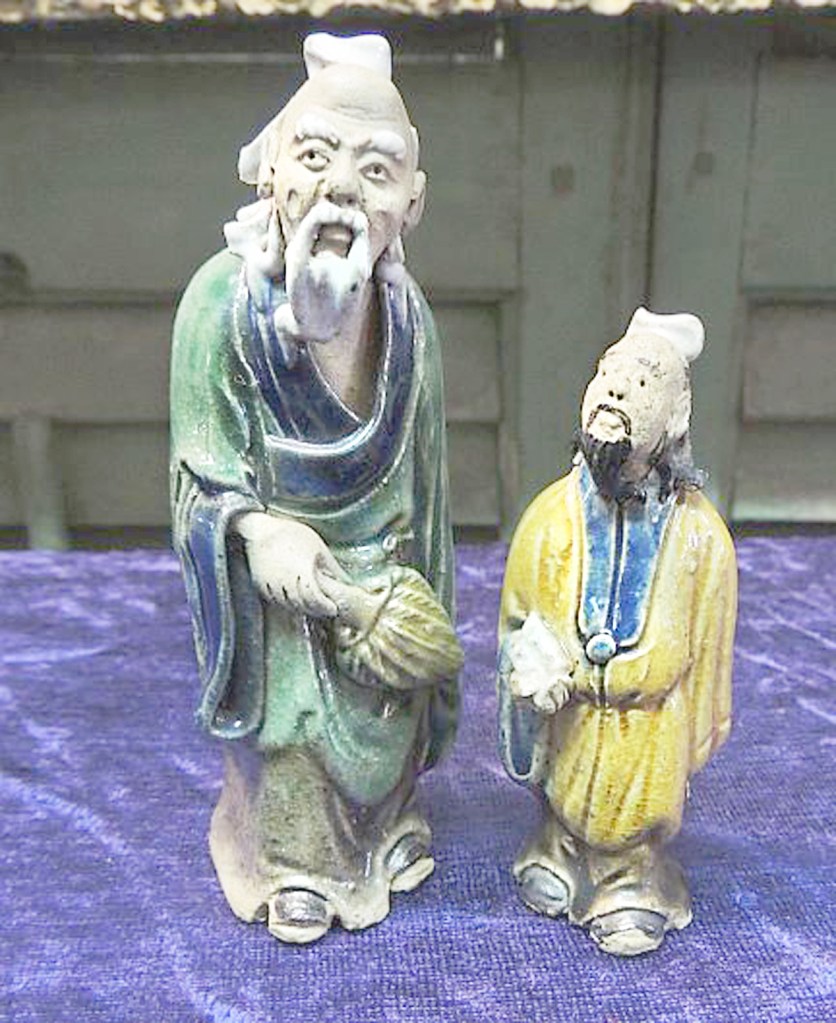 Question: Dear Jerry, I’ve collected these Chinese figures for years. I think that they are called mud men. How old are mine? Do you ever find them in brighter colors? I bought several from Elizabeth James years ago. Thanks for taking the time to look at these. 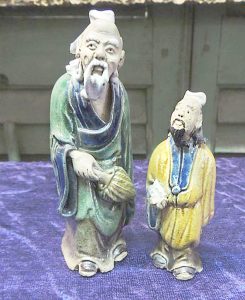 Answer: You are indeed correct. You have mud men. Mud men have a really cool history. Over one thousand years ago, in the Tang dynasty, Chinese craftsmen were creating miniature landscapes called Pen’Jing. These had little bonsai trees, rocks, shrubs, sometimes bridges and pathways and they needed, of course, people.

That’s how mud men were created. A model might have been made from wood. Then a crude mold was made from that. Clay would have been pressed in to this mold to create a duplicate. That way they could be made over an over.

The colors of their robes that you see most often are dull, muted or really toned down. This had a double meaning. The muted colors would have blended in with real life, with what actual people were wearing.

These miniatures would have been more pleasing to the eye for these small landscaped scenes.

The other reason is that bright, clear colors would have been more costly. This was a cottage type industry, literally a family affair with everyone making these figures. So every dollar counted.

Move forward a goodly amount of time and these figures became pretty and inexpensive decorations, meant for homes in America, Europe and China.

These figures by this time, were popular, plentiful and mass manufactured.

Now, don’t get too excited. Your figures aren’t nearly from the Tang Dynasty. Because of the way that they are marked —China, on the bottom — the figures you have are going to date to the 1890–1921 period. If it was marked “Made in China” that would date it from 1921 to the 1940s.

So, your figures are hitting somewhere close to 100 years old. Some collectors think that the majority of these molds were destroyed during World War II. You’ll see these men in all types of activities, sitting, talking to another gent, farming, gardening and fishing. But one you won’t see, as it is the Holy Grail for mud men, and that is a woman. Women, even from the 1920s are just unheard of. There are no known old examples.

Mud men are made today but the clay is finer, the colors are bright and happy and they aren’t the same. Some of these figures can be found in sizes ranging from eight to 12 inches high. I think that the charm of these figures is in their smallness.

You can find examples like yours priced in antique stores for $25 to $40 each. Thanks for sharing and keep looking for that old woman out there.