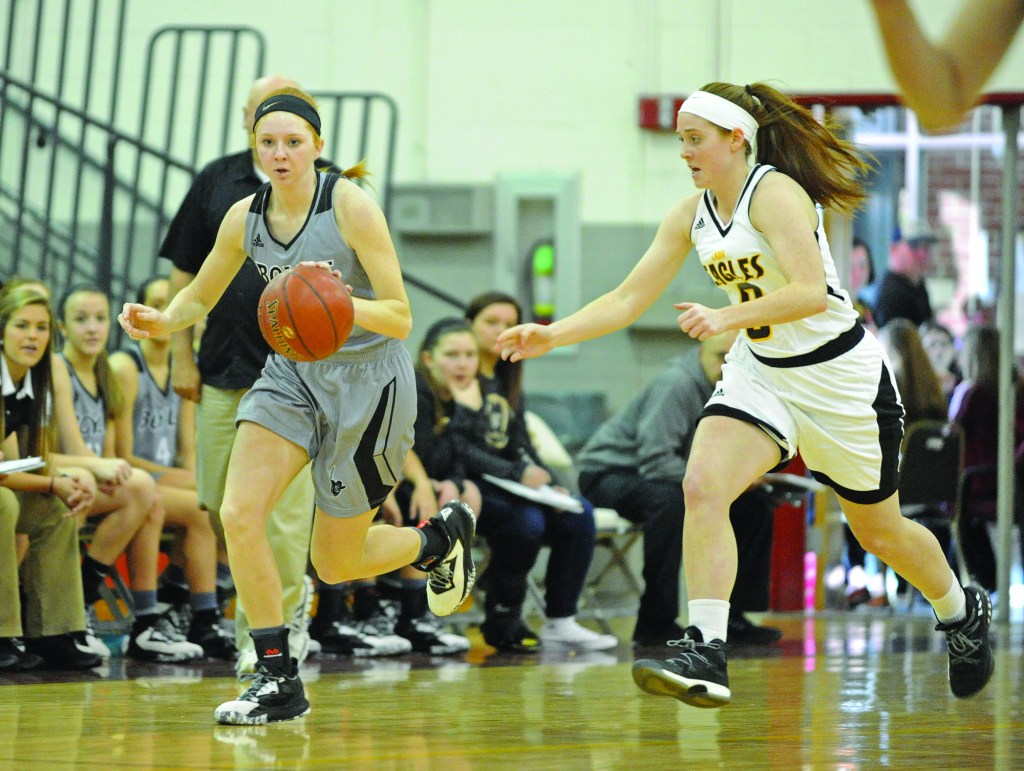 Matt Overing/matthew.overing@amnews.com Boyle County's Emmie Harris breaks the Johnson Central press during the first half Tuesday. She scored a team-high 25 points in the Rebels' four-point loss.

It was just the first round of the Elite Insurance Solutions Classic at Garrard County, but for Edwards, it was time well-spent for him to coach his team.

“You play in two tournaments, you don’t have practice time,” Edwards said. “Chalkboard sessions is basically what you get. We’ve got to come back and play a game tomorrow, so we’re just trying to reinforce those changes.”

Boyle’s loss to Johnson Central was the fourth straight for the Rebels, who are now 4-6 on the season. The Rebels’ last four-game losing streak was in January 2013.

But the Rebels were in the game throughout, taking a 34-33 lead at halftime and a 50-48 lead into the fourth quarter.

In the final eight minutes, however, Boyle’s defense slowed down. Johnson Central scored 23 points in the final frame to get the four-point win.

“Both teams got after it pretty good, both teams played hard, both teams are running teams,” Edwards said. “I thought our on-the-ball defense lost the game for us, we just didn’t do a very good job on the ball. We gave up too many layups, and we made too many turnovers against the press. That was probably the two things that did us in.”

Emmie Harris scored a team-high 25 points for the Rebels — 17 in the first half — but didn’t score in the fourth quarter. She went 0-for-5 from the foul line in the second half.

“They structured their defense against her, she missed some free throws there in the fourth quarter,” Edwards said. “But she got tired. Until we can get some of those other girls comfortable handling the ball so I feel comfortable taking her out, it’s going to be tough. That’s our main concern right now, coming into this stretch and wearing her out. She’s basically at 32 minutes every night.”

Edwards said he’s hoping the tough early-season schedule will pay off for his team. Boyle’s past four opponents have a combined record of 31-11.

“I thought we have made some improvements in some areas, obviously playing a team that’s 9-2, they’re a good team,” he said. “We’ve played a monster schedule. At some point, hopefully that will pay off for us, but right now, it’s tough grinding.

“We’ve just not had any breaks. Which is good, it means you’re playing tough competition, but when you make little mistakes and we keep repeating against teams of this caliber you’re just not going to win. That’s the purpose of scheduling like this, trying to teach them, ‘Look, these little things that are self-inflicted, we’ve got to fix.’”