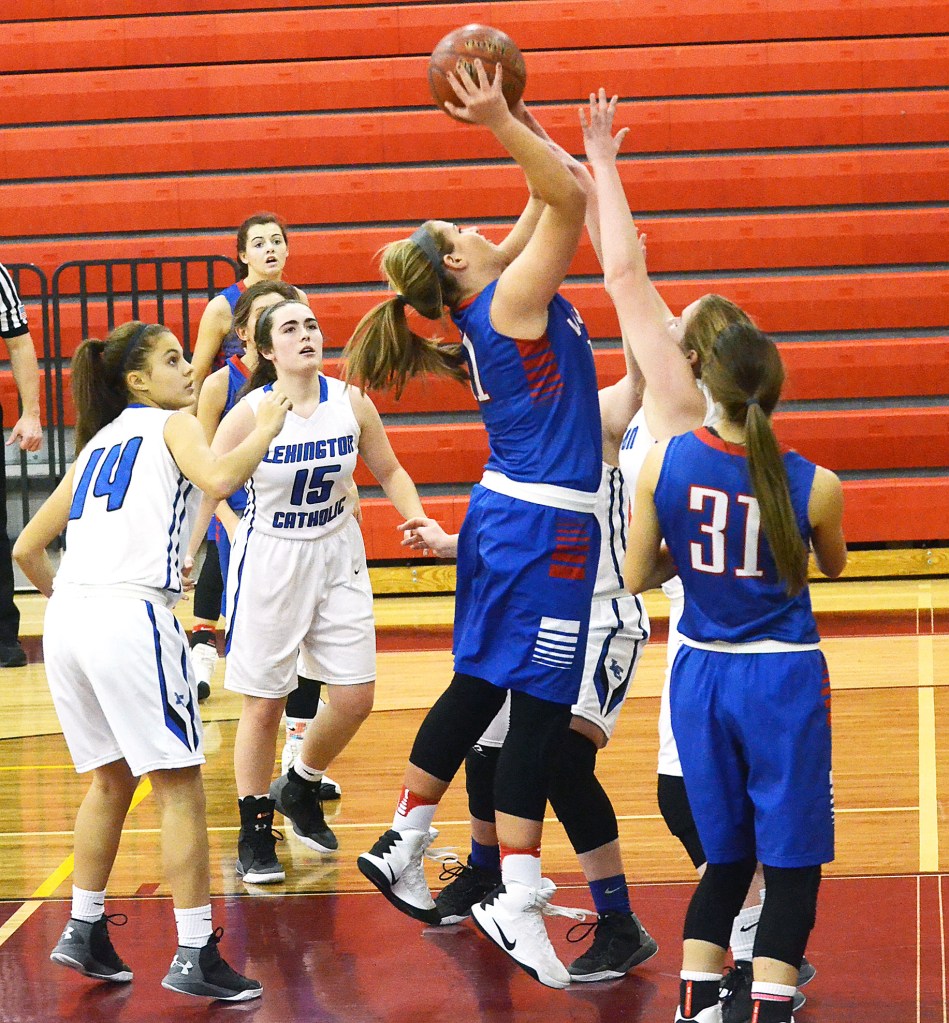 She quietly watched from the sideline Tuesday afternoon waiting for her Patriot squad to come around in its first-round game of the Elite Insurance Solutions Lady Lions Classic at Garrard County.

After posting a narrow first-quarter lead, the Patriots began to set their coach at ease, showing flashes of brilliance in the second quarter as they opened up a double-digit halftime lead. Every player eventually got in the game and all but one scored as Lincoln rolled over Lexington Catholic 62-32.

“It took us a little longer than I’d like to get going today,” McWhorter said. “At the beginning of the games, it’s like getting that rhythm, getting that momentum is something we’re working on doing a better job of. But once we kind of got rolling and got going I felt confident that we were going to be able to maybe play everybody and rotate everybody in. I’m very pleased to come out with the W.”

Kaitlynn Wilks paced Lincoln in the win with a game-high 22 points and nine rebounds, and Emma King also hit double figures, pushing in 12 points, with four assists and six steals.

Lincoln (7-3) never trailed in the game, with Wilks opening the game scoring with a putback and Jenna King following with a bucket for a 4-0 lead. Jay Ballard, who led LexCath with 17 points and eight boards, drained the  Knights’ first bucket, a 3-pointer, with 4:12 left in the first quarter.

Wilks scored the Patriots’ last three buckets of the first for their biggest lead of the period, 15-8. LexCath’s Catey Nash sank two free throws in the closing seconds to make it a 15-10 ball game.

While pleased with her team’s early lead, McWhorter said she was expecting a larger margin on the scoreboard.

“I look up and we’re only up two or three and we feel like we should be up 10 or 12,” she said. “We missed some bunnies that we need to make sure that we’re putting in. I thought our defensive intensity and effort was great, but we missed some early shots.”

Lincoln’s offense, which was 6-for-19 from the field in the first, struggled for much of the game, going just 22-for-59 overall for 37 percent.

However, Lincoln’s offensive struggles were nothing compared to LexCath’s woes. The Knights finished at just 23 percent from the field overall on 9-for-40 shooting. They also had 27 turnovers.

The Patriots took advantage of the Knights’ poor shooting and poor ball control in the second quarter, exploding on a 15-2 run. Emma King ignited the run with the first of her two 3s in the scoring surge, Maddy Boyle also nailed a 3-pointer, Trinity Shearer and Jenna King got a bucket apiece and Wilks sank two free throws as Lincoln upped its lead to 30-12.

It took LexCath (3-6) almost as long to score its first bucket of the second quarter as it did in the first. After six turnovers and one missed shot, Maya Jazdzewski provided the one hiccup in Lincoln’s run, tallying inside with 4:42 to go in the half. The Jazdzewski basket was one of only two field goals for the Knights in the period. Ballard nailed a 3-pointer late in the half for the 30-16 halftime margin.

LexCath never threatened Lincoln’s lead in the second half. The  Patriots held the Knights to single digits (8) in both the third and fourth quarters, outscoring them 32-16 to earn the lopsided win.

“There are still things we want to work on. Things that we definitely need to clean up before district time rolls around after the new year,” McWhorter said. “But overall it’s a good win and I’m very proud of our girls.”

The Patriots won on the glass 46-30. Zaria Napier grabbed seven rebounds for Lincoln and Haley Southerland had six.