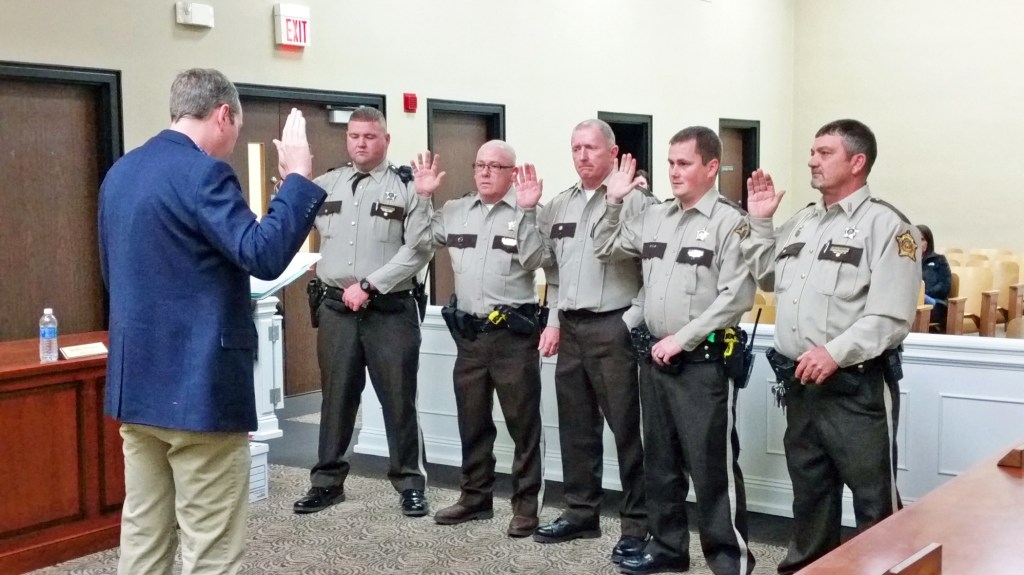 LANCASTER — A special-called meeting of the Garrard County Fiscal Court turned ugly on Thursday night, when the sheriff was kicked out of the meeting and deputies walked out in protest.

The deputies later returned after the meeting and were sworn in as officers of the newly created county police force. Plans for the police force precipitated the contentious meeting.

The agenda for the meeting included a plan to have second readings and adoptions of two special non-taxing district ordinances and the second reading and adoption of the fee-pooling and purchase order system for the Garrard County Sheriff’s Office.

Votes on the taxing districts were passed quickly. But before the fee-pooling vote could be brought to the floor, a request was made by Sheriff Tim Davis to allow public comments, which he started off. 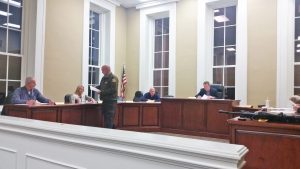 Kendra Peek/kendra.peek@amnews.com
Garrard County Sheriff Tim Deputy hands magistrates a stack of papers citing the Kentucky Revised Statutes relating to allegations he claims were waged against him in a closed session.

“After serving here for 20 years, I recently found out that I was maliciously lied upon,” Davis said to magistrates.

Davis referenced an executive session from a meeting earlier in the month, one that he was not a part of, and rumors he said were being circulated.

“These rumors are all over town and probably going to keep me from being elected sheriff again, thereby taking away my ability to take care of my family financially and ruin my retirement, as well, that I had worked so hard for,” Davis said.

He pointed out two rifles that had been donated to the department and had been sitting in his office; one of the rifles, Davis said, he had been accused of stealing and selling, but that was not the case.

Davis had decided to take the rifles home, to store them in his gun safe. He said he had told employees he was going to let his son shoot one, a .308, to “let him ‘get some,’” and experience the kick that such a high-powered gun has.

That hadn’t happened yet, Davis said, explaining that neither weapon had been fired, but had been in his safe.

“I am the sheriff of this county. I have the right to put property where I want to,” he said.

Davis said he was also accused of selling weapons to deputies as they left the department. According to KRS 65.041, of which he gave a copy to magistrates, weapons that are being “disposed” of can be sold to the employee that it was issued to if it was their service weapon, they are retiring or their weapon is being replaced, the employee is authorized to own a gun, and the sale is the fair market value of the weapon.

The KRS was included in a packet of statutes that Davis had printed out and handed to the magistrates.

“I am honest and I am by the book. I always have been and I always will be. I will not be accused, tried and convicted by rumors and you all have done that,” he said.

Davis said another allegation had been that “money is gone” from the sheriff’s department budget.

“I have called and spoken to Mike Harmon, the state auditor. There will be an emergency audit, immediately, of my office,” he said.

None of his past audits have been off, Davis said.

“There’s no money missing from my office. If there is, find it. Charge me,” he said.

Davis said he felt that the magistrates took the word of “disgruntled employees” who were “trying to take my position.”

“I have not committed a crime and you have tried and convicted me of that, based on rumor. That’s where your fault is. You all were deceived. You never asked me a question about it. You didn’t investigate me. You didn’t check into it,” Davis said. “You people who have known me since I was born, you chose to believe that and try and convict me and base your decisions you made on that. It was wrong. You’re not going to ruin my name.”

Davis had been given five minutes to speak his peace in the court, which ran out. Despite that warning from Judge Executive John Wilson, Davis continued to speak, making a point of turning the rifles over to the court. He was then warned of being out of order.

“I’m not out of order. I uphold the order in the court. I’m telling you, I’m turning (the rifles) over,” Davis said.

He was warned of being held in contempt, a threat he welcomed.

Others spoke, questioning how the plan will save money, and what would happen if a future judge-executive decided to reverse the plan.

Donnell Barnes, another community member, wondered why the money that was going to help fund the new department couldn’t simply go toward buying cruisers and providing health insurance for the sheriff’s department, things Barnes said Davis had asked for.

Wilson would not answer questions, stating that under statute, he wasn’t allowed to do so unless it was a public hearing.

“We met the day after Christmas and we asked my brother, ‘Have you done anything wrong?’ That was tough. We asked him if he had stole, because that’s what we had heard. We were destroyed. We try to be Christians. We’re not perfect — if any of you know me, you know that I’m not. We said, ‘Tim, shine a light on all of it. Lay it all out there and let’s get to the bottom of this, whatever it is.’ That’s our goal, we’re not here to pick fights with anybody,” said Ricky Davis, the brother of Tim Davis. “We’ve grown up with most of you. The rest of you we know. We care about you and we love you. We’re friends.”

He thanked them for the chance to speak, despite it being “irregular.”

“This county police thing — you’re supposed to be leaders of this county,” said Hugh Davis, the father of Tim Davis. “Down the road, it has an inherent evil in it. It can be taken over by somebody. You all are supposed to be here for the good of the people in the county. Down the road, it may turn into something that’s not good for the people. I ask that you rethink it, look at it from a Christian standpoint.”

After hearing from the community, Magistrate Joe Leavell expressed concerns about the fiscal court being “in law enforcement.”

“If there’s problems in the sheriff’s office, maybe we should let it crash and burn. Maybe we should have let that happen and when it happened we could pick up the pieces,” Leavell said. “Fee-pooling is a good thing. I just don’t think we need to be in the law enforcement business … If the sheriff’s not doing his job, that’s for the public to decide.”

“I don’t want to be in the county police force business myself…However, it’s our job as leaders to make sure it doesn’t ‘crash and burn.’ The deputies are here, they have families and they have jobs to do,” Wilson said. “Extraordinary times call for extraordinary measures.”

“This is something that is our responsibility,” Wilson said.

He said they didn’t want the county to find itself without any police coverage, which might happen if things were left the way they were.

“If you financially support the sheriff’s office, it will run fine,” he said.

Davis was told to leave the meeting, because he “could not control” himself. After his departure, deputies were invited to speak.

“The reason that we are here tonight is that we were going to quit. We’re working 12-hour shifts, we’ve got four people, we’ve asked Tim to hire some people … publicly tonight, I will resign,” said James Napier, before removing his belt and badge.

He was followed by Tevis Graham, who handed over his badge. Both men had signed letters of resignation earlier in the week. Graham is slated to lead the Garrard County Police Department, but his title has not been determined.

The county’s other two road deputies followed the men out. They also had signed resignations.

“My job’s the school resource officer and I’m not walking away from any of the schools. I haven’t signed a resignation because I didn’t know whether to or not and I still don’t know whether to. When the school goes back in session, I plan on being there whether I get a paycheck or not until you all figure something out … I can’t afford to resign until I have something to count on,” Amon said. “The schools depend on me. I’ll be there when the schools start up in the new year.”

The fiscal court completed the vote on the fee-pooling ordinance, which allows funds from the sheriff’s department to be used for other county departments, rerouting it to the Garrard County Police Department.

The meeting ended with a closed session to discuss pending litigation and personnel. 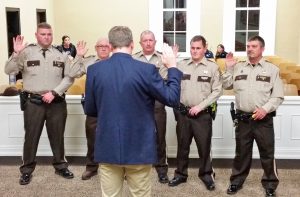 Following the meeting, Amon, Napier, Graham, Jeremy Smith and Josh Gipson were all sworn in as police officers with the newly-formed Garrard County Police Department. Officers were scheduled to hit the road immediately, Wilson said. It was not immediately clear what effect the shift to a county police force would have on the school resource officer contract with the Garrard County School District.

After the meeting, Leavell clarified his statements, explaining that he felt if there were problems in the sheriff’s department, those should have been allowed to come out publicly so that Garrard County residents would know the full story and could decide the department’s leadership from there.

Wilson declined to speak on the matter, simply stating that the fiscal court would let its “actions speak for themselves.”