Top stories of 2016: Recapping the best moments from the year in sports 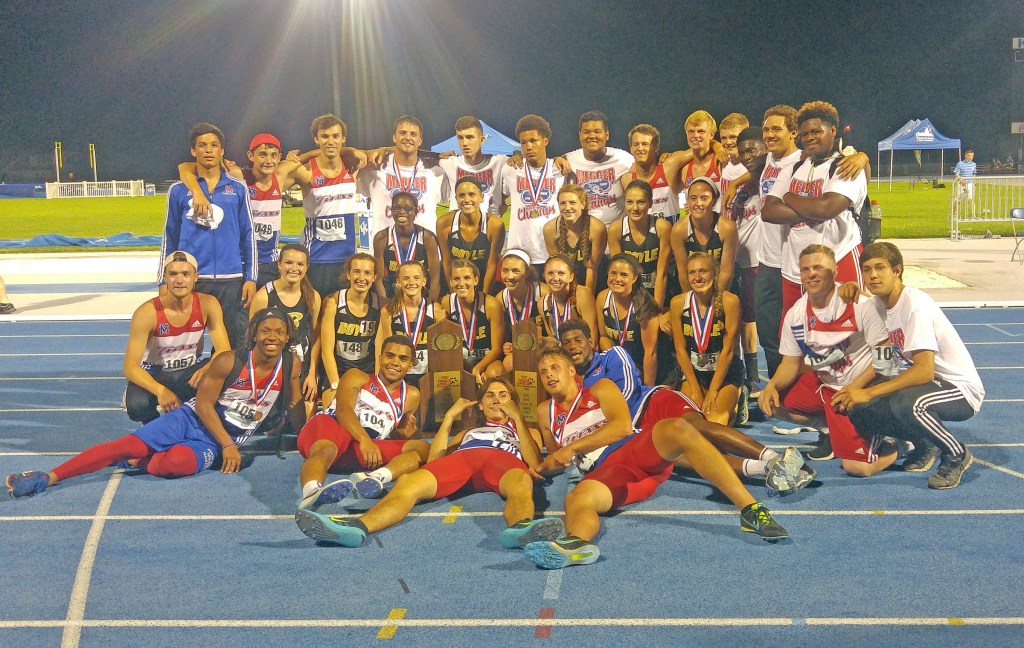 Photo by Matt Overing/matthew.overing@amnews.com The Boyle County and Mercer County track teams share a photo opportunity together after the Boyle girls and Mercer boys won the state 2A track championships.

It’s never a dull year for athletics in the area, and this one was no exception. From state titles and school records to returns to glory and historical seasons, 2016 was definitely a year to remember.

The Advocate-Messenger sports editor Jeremy Schneider and sportswriter Matt Overing put their heads together, and through a secret, scientific formula of opinions and discussion, came up with our list of the Top 10 Stories of 2016.

The Titans championship came with plenty of drama — the title wasn’t decided until the final race of the day, and when Dustin Baker, Chase Moore, Chase Edwards and Mishi Easterling beat Paducah Tilghman by under a second in the 1,600 meter relay, the Titans claimed the crown. Mercer topped Tilghman by three points.

Emmie Harris swept the hurdles to lift the Rebels to their first track title, and she was on the 1,600 and 800 relay teams, helping lead Boyle over Highlands by 21 points.

The Ads’ regular season included an emotional win over rival Boyle County, and they outscored their first four playoff opponents 161-79. Along the way, quarterback Zach Dampier etched his name as one of the best quarterbacks in school history and one of the best in Kentucky history, throwing for 3,574 yards and 43 TDs, a number which led to him being named 2A state player of the year.

After the win over Holy Cross, Ads coach Clay Clevenger and his dad shared a moment on the field.

“My dad grabbed me after the game, gave me a big bear hug and said, ‘This is what you came home for, isn’t it?’ It is,” Clevenger said. “You come back to this because you want to add to the rich tradition that we have.”

Led by Seygan Robins, Lyric Houston, Lexy and Faith Lake, Emmy Souder and Emma Davis, the Titans rolled through the season, advancing to the program’s first girls basketball semifinal. And with those same names back this year, don’t be surprised to see Mercer girls basketball on this list for 2017.

More wins, deepest playoff run, most yards, most points, these Rebels were the school’s best ever. What might be most impressive, the players who did this were the same ones in Liberty for the previous few years. Stonebraker was able to get more out of quarterback Breece Hayes, running back Collin Miller and their teammates than anyone else.

And the players realized just how important their coach was to their success.

“He was everything for us,” Hayes said. “Through his hard work and always pushing us to be our best, he always looked out for us. Without him we wouldn’t have been anything. Many people say that about a coach but he truly was that person for us.”

November into December into January, the Titans met every challenge and came out with win. It wasn’t until the first week of February when they first lost. Their second loss came in the state tournament to eventual champ Dunbar, but it did little to diminish their accomplishments.

Cody Shackleford led the Titans with 30 goals, Brandon Ballard had 25 goals and 24 assists, and Garrett Dean added 21 goals and 13 assists. The Titans scored 106 goals and gave up only 16, ending up as one of the best defenses in state history.

Along the way this season, they set a new school record with 24 wins. Their last district loss came in 2007, a run of 61 straight wins.

“Ten years of it, I don’t care what you say, it’s a lot perseverance, a lot of hard work, a lot of commitment, a lot of ups and downs, and it’s special. This one’s special,” Rebels coach Brian Deem said after Boyle beat Danville in the district final.

HONORABLE MENTION: There were too many great stories this year, so many we could have made a top-20 list. Here are a few which just missed the cut — Boyle product Jacob Bodner makes debut with Lexington Legends; Lincoln County girls basketball wins eighth district title in nine years; Mercer standout Seygan Robins commits to play at the University of Louisville; Centre quarterback Devin Hayes finishes 12th in NCAA Division III with 3,148 passing yards; and Danville’s Jared Southerland wins region golf title, advances to state tournament.