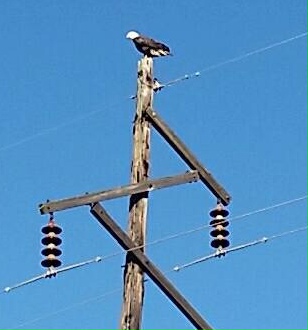 Photo by Jim Jacobus A bald eagle perches on a utility pole along Perryville Road Wednesday. Jim Jacobus spotted the iconic bird only about a mile from his home.

A bald eagle has been spotted by multiple people in central Boyle County, just to the west of Danville along Perryville Road.

“I just about ran off the road,” said Jim Jacobus, a Perryville Road resident who was on his way home when he saw the bird of prey sitting on top of a utility pole. “I thought, ‘did I just see what I thought I saw?’ That’s the first I’ve seen in Boyle County. I know other people have seen them in the Forkland area, but I’ve not seen one that close to town before.”

Jacobus was able to get close enough to capture an image of the eagle with his cell phone.

“He just stood up there. He was looking right at me sometimes and he didn’t care — he knew he was out of reach of me,” Jacobus said.

Tom Ellis, another Perryville Road resident, also saw a bald eagle along the same stretch of highway, making it possible it was the same bird seen twice.

“As I was approaching (a mailbox), he was swooping down and then upward,” Ellis said. “I knew that he would land, so I put on my emergency lights and pulled over and sure enough, he landed.”

Ellis said he was able to get within about 50 yards of the bird.

“He was stoic and magnificent just sitting up there on the telephone pole,” he said.

Both Ellis and Jacobus said they’ve seen bald eagles before. Jacobus said he’s seen many on trips to Alaska and one at Dale Hollow State Resort Park, but “to have one just a mile from my house is kind of neat.”

Ellis said he has seen a bald eagle near the Boyle-Marion county line and twice in the Land Between the Lakes but “never before in this area.”

“It’s absolutely exhilarating to know that they are here,” he said.

According to the Kentucky Department of Fish and Wildlife, bald eagles all but disappeared from Kentucky in the 1960s, but the population has come back and grown successfully since the banning of DDT and a “nationwide reintroduction effort” in the 1970s and 1980s.

“Sightings of migrating and wintering eagles in Kentucky are becoming increasingly widespread,” according to the Fish and Wildlife website. “Bald eagles can be seen just about anywhere in Kentucky during the migration and winter season (September-March). Nonetheless, seeing a bald eagle is exciting every time.”