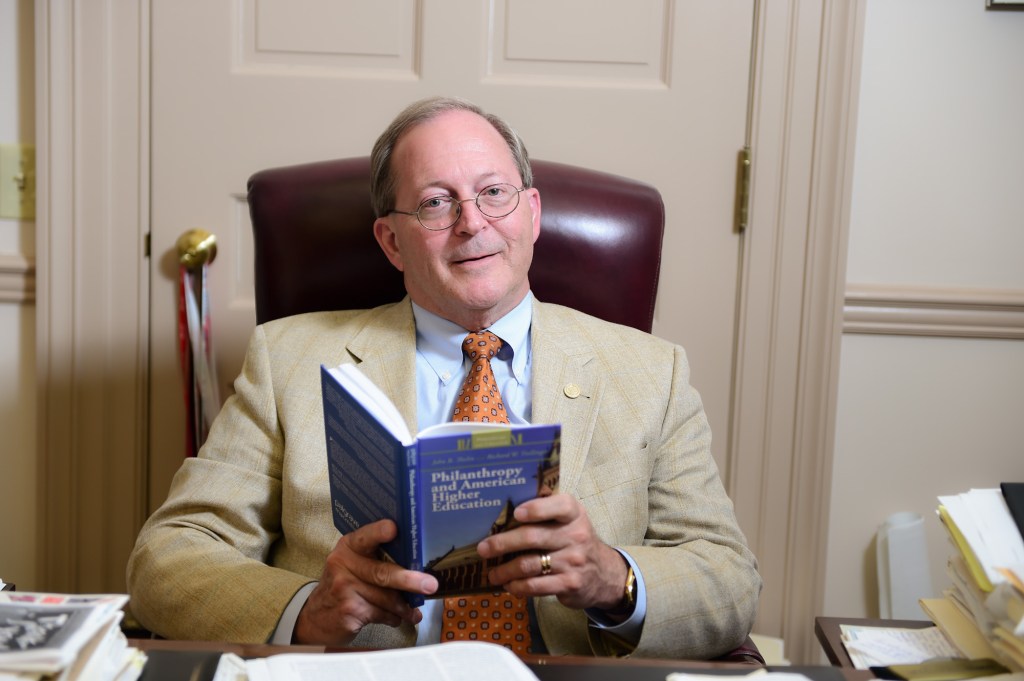 Richard Trollinger poses for a portrait with his newly published book on September 3, 2014.

Vice President for College Relations at Centre College and Economic Development Partnership chairman Richard Trollinger retired from the college yesterday after more than 20 years at Centre. He presided over his last EDP board meeting on Dec. 21.

Trollinger said he officially began his work at Centre Aug. 1, 1994.

“The first two years I was here, my title was executive director of development and director of the Front & Centre Campaign,” he said. “In 1996, I was named vice president for college relations, the position I have held over the 20 years since.”

“(Trollinger’s) impact at Centre is one of monumental proportions of leadership and the giving that has occurred over his 20-plus years is clear evidence, but his real gift to the college was his success in a creating a ‘culture of philanthropy’,” Centre College President John Roush said. “That would be his legacy.”

“I believe that philanthropy enables people to touch the good within themselves, and I have promoted giving in that spirit,” Trollinger said.

Trollinger said working at Centre over the years has been one of the greatest blessings of his life.

Over the years, Trollinger has built a large friend group among the faculty, administrators and students, as well as among Centre’s alumni, friends, trustees and the parents of students, he said.

Trollinger said he is thankful to specifically to Roush, who is his boss and a close friend, for allowing him to be involved in serving the community.

“John understands that Centre has a vital interest in the economic well-being of the community, especially a vibrant downtown, and encourages members of the staff and faculty to be involved in community organizations,” Trollinger said.

Trollinger added that one of the great things about his job at Centre was that it enabled him “to be a bridge between the on-campus community and the large off-campus constituency of caring people who are also members of the Centre family.”

“Years ago, a retired college president told me — perhaps I should say warned me — that there are easier ways to die than being a fundraiser,” he said. “That’s probably true, but there is nothing in my mind that compares with the opportunities I have had in my career to work with people who, acting on the values they hold dear, wanted to give of their resources to support the college and the students we serve.”

“(Trollinger) is a very thoughtful, strategic guy who encourages others to be likewise,” Roush said. “He is serious, playful, dedicated and determined all at once. (Trollinger) is one of those people who has the capacity to work and play and I will miss very much the opportunity to work, travel and lead alongside him.”

Trollinger has served on the board of directors for the Danville-Boyle County Economic Development Partnership since 2010.

When he started working with the EDP, he said he was elected to fill one of the two director-at-large positions on the board.

“In 2012, I was elected as the vice chair then became chairman in 2014 and served in that role for three years.”

Along with those roles, he also served on and was chair of the board of  the EDP’s predecessor, the Community Development Council, in 1998 and 1999.

“I enjoy getting to know people, and my involvement with EDP has given me access to so many good people in our community,” Trollinger said. “Because we are human, we sometimes have our differences, but we also are united in our belief that Danville-Boyle County is a good place to live and to work and to do business.”

“Under Richard’s leadership, the EDP continues to develop its collaboration and outcomes while overcoming those who are resistant to the idea that through the partners’ teamwork, our community is better served,” EDP co-chair Ben Nelson said.

“Richard is a great diplomat,” Nelson said. “He listens and responds with empathy, asks for help in solving the problem, all the while maintaining and enhancing others’ self-esteem.”

Nelson said people can always count on Trollinger to make them feel appreciated.

“We will miss him,” Nelson said. “Richard has been a long-time dedicated volunteer with an unwavering commitment to the idea that ‘together we can accomplish more’ for Boyle County. His service has modeled that fundamental belief. We are fortunate he made time to serve.”

Including the two positions he retired from, he said he has served in various roles during his 46-year career in higher education.

“My self-definition is that of an educational fundraiser and student of philanthropy,” he said.

Before starting at Centre in ‘94, he worked for 23 years at Emory & Henry College in Virginia, which is where he received his undergraduate degree.

“Most of those years, my title was vice president for development and external affairs, but during the 1991-92 academic year, I served as interim president of the college,” he said.

“My graduate work, particularly at IU and UK, has enabled me to pursue my interest in the role of philanthropy in shaping American higher education,” he said.

In 2014, Trollinger’s dissertation advisor at UK, Dr. John R. Thelin, became a co-author with Trollinger of a book called “Philanthropy and American Higher Education,” he said.

In addition to his career work, he served in other areas of the community.

Trollinger served on the board and was chairman of the Kentucky School for the Deaf Charitable Foundation and the Wilderness Trace Child Development Center.

He is also a member of the Danville Rotary Club and the Presbyterian Church of Danville.

“The focus of my life’s work, both professionally and within the community, has been on enhancing the quality of life for all people,” Trollinger said.

“If I know [Trollinger], he will not go away,” Judge-Executive Harold McKinney said. “He will be back doing what he does best, and that’s helping other people and helping Centre College and this community.”

Even though Trollinger has retired from his long-standing position at Centre, after a six-month sabbatical, he will return to the college as a senior philanthropy advisor, a part-time member of the development staff.

Trollinger said he plans to pursue other interests such as writing another book. And he wants to travel with his wife, Patsi.