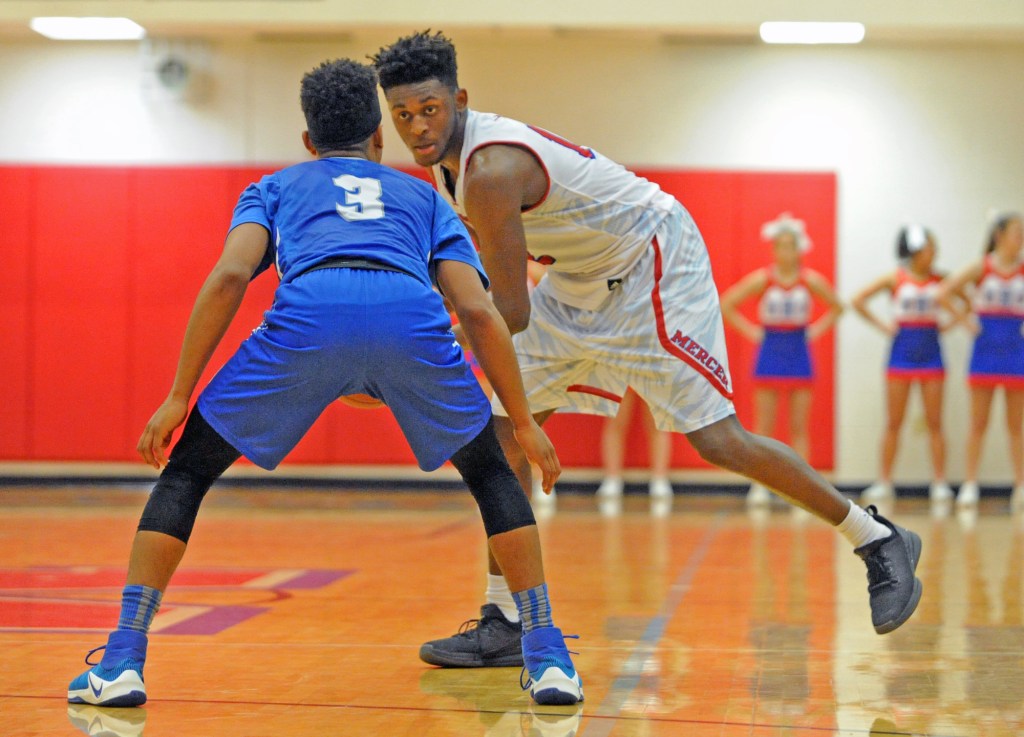 And Danville’s player, Jared Southerland, was out on Tuesday night.

Danville scored 33 points in the fourth quarter but it wasn’t enough to topple the Titans at home, as Mercer held on for a 70-67 win behind Trevon Faulkner’s 29 points.

“You’ve got to give Danville a ton of credit, they came out and they made plays,” Mercer coach Kurt Young said. “They got down, they didn’t quit playing. They competed. They had some kids step up and make shots that maybe normally don’t, but we told them that was going to happen. It’s a big game and kids are going to step up and accept that challenge.

“I thought we relaxed just enough and I think there was one or two plays that we gave up that you could just tell, I don’t know if we were playing not to lose at that point, but once again, they took it to us. There’s no other way to put it.”

Mercer County jumped out to an early 10-4 lead and it looked like it could be another up-tempo game for the Titans, but Danville did well to slow the pace. After one quarter, the Titans led 13-8.

Danville’s offense continued to struggle in the second quarter, picking up just 11 points to trail Mercer 30-19 at the break.

“We’ve got one guy with experience. So some of our guys are better than they realize,” Danville coach Ed McKinney said. “First half, we were just shaky, not playing aggressive. They’re the kind of team that will make you make plays. You’re not going to get into the half court and run stuff. You’ve got to have enough confidence to make plays, and we didn’t have that early.”

Southerland’s absence was a coach’s decision, McKinney said. Without him, other players had to step up to fill that void, and in the fourth quarter, they did. The Ads trailed by more than 20 points in the third quarter and entered the fourth down 53-34.

“I thought Tanner got a lot better second half,” McKinney said. “Shaud made some aggressive plays, made some passes out of the paint.”

As well as Danville played in the fourth quarter, Young said he’d like his team to show more patience on the offensive end when they are holding a lead. Defensively, his team had lapses that weren’t there in the first 24 minutes.

“That’s the good and bad thing about our system. What we try to teach is, we play the same way, we’re still going to press, but then you tweak some things,” he said. “You’ve got to understand time and score. Ideally, if you’re doing it correctly, we’re pressuring, but we’re trying to contain more. We’re not running and jumping as much. I think we gave up three long passes that we hadn’t given up the entire game. That’s just focus.

“With our system, if you relax, you look bad. Same thing on the offensive end. What makes us so good at times and dangerous is our ability to push and attack and share the ball, try to make plays. But you have to learn to do that with patience, too. That’s a growing process.”

During a fourth quarter timeout, McKinney tried to emphasize keeping the ball out of Faulkner’s hands to his team. But Faulkner continued to weave his way to the basket.

Part of that learning experience for the Titans is finding Faulkner when he’s got an eye for the goal, Young said.

“I told them, ‘Guys, he’s one of the most unselfish guys I’ve ever seen. Trevon is unselfish and trusts you all. You all have to trust him,’” he said. “… ‘We’ve got to remember where No. 12 is at, especially when he gets in that frame of mind. You have to understand he’ll do the same for you.’ And it’s a learning process. The great thing is, none of those things we did were selfish, it’s just experience. We’ve got to continue to grow from it.”

Both teams will continue to improve as football players continue to integrate into the team. McKinney said he’s only had 10 practices with his full complement of players, and added up that they’d have about 25 practices total this year between all of the games.

“I don’t think our record is as bad as it says we are. When you think of that, we’ve just got to get better in the games,” McKinney said. “They’re like practices.”