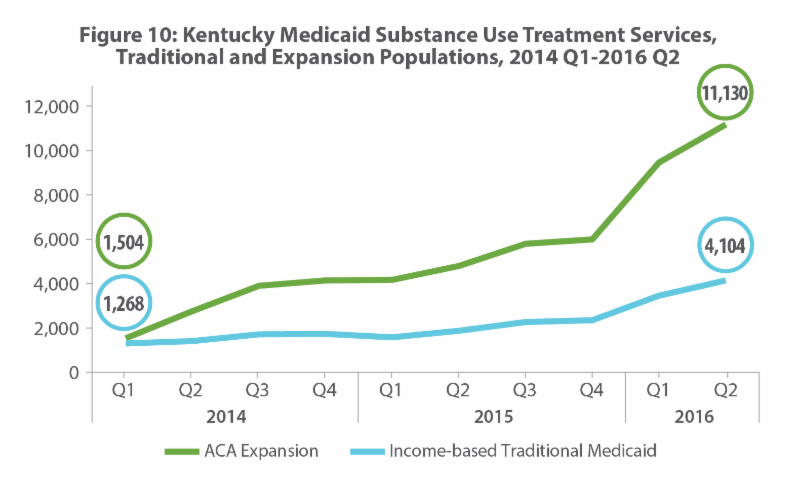 Expanded Medicaid coverage in Kentucky has led to many more people receiving treatment for substance abuse, according to a report released last week by the Foundation for a Healthy Kentucky (FHK).

“Treatment services for substance use increased by 740 percent for Medicaid expansion beneficiaries over the 30 months from the beginning of 2014 through mid-2016,” according to a news release from FHK. “The expanded Medicaid program … under the Affordable Care Act (ACA) covered approximately 11,000 substance use treatment services in the second quarter this year, compared to about 1,500 in the first quarter of 2014.”

According to FHK, the evidence points to Medicaid expansion and other elements of the ACA, called Obamacare by some, having “helped increase access to substance use treatment in the state.”

“But rising Kentucky rates of prescription opioid and heroin abuse are also likely to have played a role in the growth of several types of treatment for substance use in the commonwealth,” the report reads.

“The report confirms our continued concerns about overdose deaths and the continued usage of heroin as prescription opiates become less available,” said Kathy Miles, facilitator for the non-profit Boyle County Agency for Substance Abuse Policy. “… We have found many people have been able to go to treatment from our local area who would not have had coverage for that treatment five years ago.”

Miles said the report documents an increase in prescribing buprenorphine as part of treatment for substance abuse, which is “good news.”

“Treatment outcome research is indicating the buprenorphine, combined with counseling, 12-step recovery groups and other psychosocial interventions often provides the best outcome for continued recovery from addiction to opiates,” she said.

Miles said the creation of harm-reduction syringe exchange programs in Boyle and Mercer counties is “consistent with the recommendations of the national report.”

“ACA provisions that allowed Medicaid expansion in Kentucky and required most health insurance plans to cover substance use treatment are helping ensure that more people with drug and alcohol disorders have access to the treatment they need,” said Ben Chandler, president and CEO of FHK in the news release. “But expanded access to treatment is just one part of the solution to the growing problem of opioid abuse in Kentucky and across the nation.”

According to the report, an estimated 585,000 people in Kentucky did not have health insurance and so did not have coverage for treatment of drug and alcohol problems. An additional 326,000 people were estimated to have health plans that “weren’t required to cover these treatment services” and “often had strict limitations,” according to the report.

“Since the ACA, Kentucky has extended coverage for at least some services to 635,500 non-elderly traditional and expanded Medicaid enrollees,” FKH’s release reads.

FHK cites the Kentucky Office of Drug Control Policy as finding 67 Kentucky counties in 2015 that had more than 20 overdose deaths per 100,000 population. That number is up from 64 counties in 2014, while only nine counties in the entire country had rates that high in 2000, according to FHK’s release.

Boyle County saw fewer than five deaths due to drug overdoses every year from 2012-2014, but there were eight overdose deaths in 2015, according to the Kentucky Office of Drug Control Policy’s 2015 Overdose Fatality Report. None of those overdoses were due to heroin or fentanyl — an opioid many times more powerful than heroin — according to the report. In 2016, at least four overdose deaths in Boyle County have been confirmed to be due at least in part to the use of fentanyl.

“The staggering numbers in (FHK’s report) are seen locally in the pain, suffering and costs of substance misuse,” Miles said. “Every statistic has real people behind it — children who have lost their parents; grandparents who are raising grandchildren; employers who can’t find functioning employees; teachers and guidance counselors who find their work complicated by family addiction; county and state government budgets stretched to the limit; and pastors who have buried too many young adults.

“We are well aware locally that responding to the immediate crisis is only part of our work — we must work on turning this around for the next generation.”