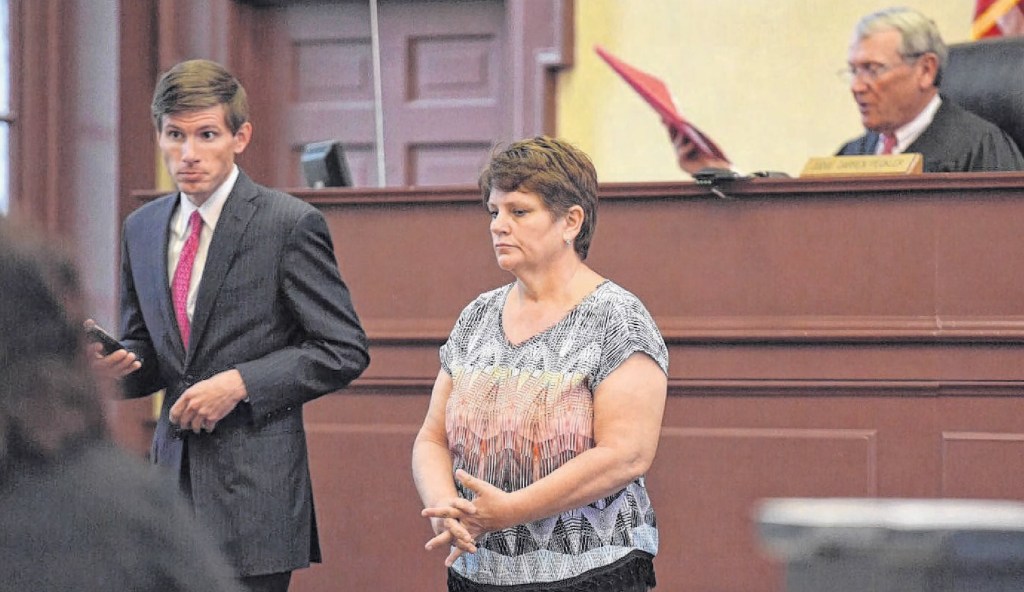 Photo from June 3, 2015, Advocate-Messenger File photo by Clay Jackson Connie Smith, center, leaves a Boyle County courtroom in June 2015 after rejecting the terms of a plea deal. Smith, a former tax administrator for the Boyle County Sheriff’s Office, is accused of taking more than $60,000 from the sheriff’s office.

A former Boyle County Sheriff’s Office employee accused of taking more than $10,000 from the department over a period of about two years returned to court on Tuesday to be arraigned on a second charge.

That charge is a class C felony. According to the indictment handed down in December regarding the newest charge, Smith is accused of taking the money and failing to make the required disposition between the dates of Nov. 1, 2010, to Oct. 2, 2012.

Smith already faces one count of theft by unlawful taking, $10,000 or more. Both charges stem from the same allegations, said her attorney, Thomas Clay, of Louisville.

Clay said they are ready for the trial for the charges, which is scheduled for Jan. 23.

“We are looking forward to having our day in court,” Clay said.

Smith had worked as a tax administrator for the Boyle County Sheriff’s Office.

A Sept. 1, 2013, issue of The Advocate-Messenger states that Smith was fired in October 2012, after she refused an option of being placed on suspension by then-Sheriff Marty Elliott. Through an open records request at the time, a letter from Elliott to Smith said she “rejected suspension then stated, ‘Fire me.’”

Files obtained from the Boyle County Circuit Clerk’s Office state that Clay filed a motion for Judge Peckler to recuse himself from the case, which was denied.

A diversion agreement between the Commonwealth’s Attorney and Smith’s attorney was reached that would have required Smith to repay $60,504.43 in restitution, remain on probation, perform 40 hours of community service each year and maintain full-time employment. She would have avoided jail time under that agreement.

Peckler sought to add an additional 30 days per year of weekend jail time to the diversion.

“It is the defendant who found these additional conditions unacceptable and withdrew her guilty plea,” the file states.

Clay confirmed a motion to move the trial out of Boyle County went unanswered.