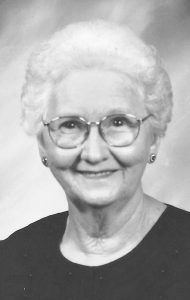 Frances Russell, 92, passed away Tuesday, Jan. 3, 2017. She was born in Forkland, Kentucky on August 17, 1924 to the late Zachary Thomas and Idella Wilson Taylor. She was the wife of 73 years to the late Lee Donaldson Russell who passed away in 2016.

Frances was the oldest female member of Perryville United Methodist Church and was a homemaker. She enjoyed sewing and quilting and made quilts for all her children, grandchildren and great-grandchildren. She loved UK basketball and would always keep the stats of each game.

In addition to her parents and husband she was preceded in death by siblings, J.W. Taylor and Ginny Taylor.

Pallbearers will be B.J., Todd, Jason, and Ron Russell, Marlin and Billy Taylor.