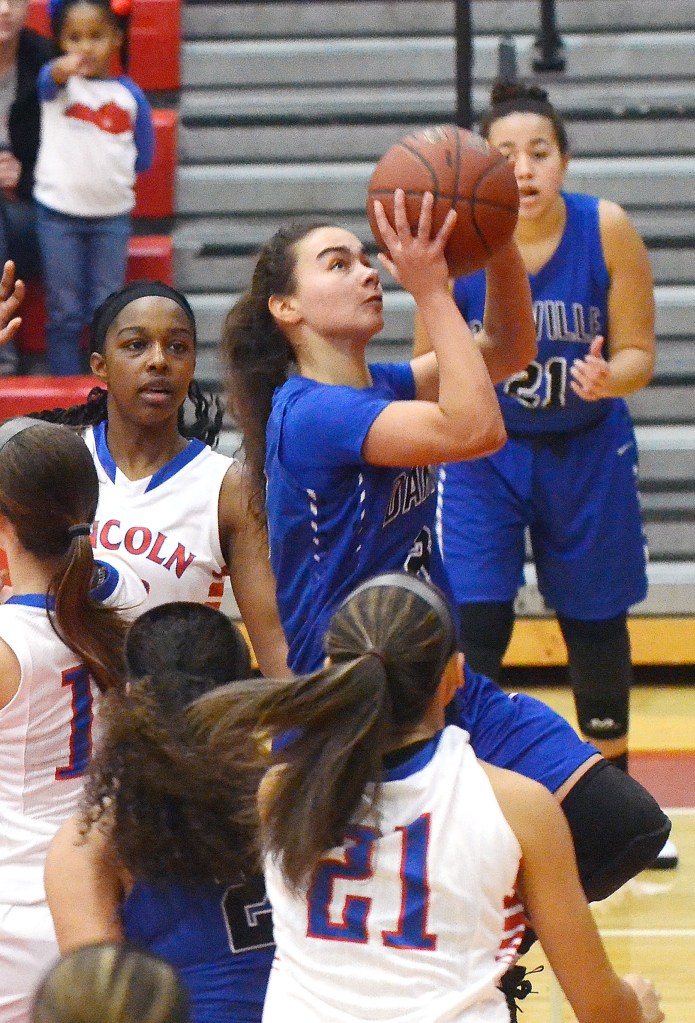 STANFORD — Some players might have been broken after their opponents’ 10-0 blowout run to open the ball game.

Some players, but not the Danville girls.

The Admirals took it all in and turned it into a 62-58 win Friday against host Lincoln County.

Alyvia Walker sank a free throw midway through the first quarter to get Danville on the scoreboard then proceeded to pour in a game-high 21 points, Zenoviah Walker connected for 15 points, including six of the game’s last seven points, Kennedy Walker followed with 12 points and Ivy Turner tallied 11 points as the  Admirals shook off the 10-0 deficit and came back to win the 45th District opener for both teams.

And the Admirals’ rebound from the slow start made Michael Menifee one very happy coach.

“Right there is what I talk to them about every day in practice. It’s about how you handle adversity,” he said. “In life you are always going to have adversity. We had adversity and I said, ‘Hey, we can do one of two things. We can lay down and let them try and take the game from us or we can say we are going to play basketball and let the chips fall where they may.’ The girls went out there and they fought like crazy and they handled adversity. A lot of teams don’t overcome starts like we had. But we did. They never gave up. They fought through the adversity.”

Lincoln coach Cassandra McWhorter commended senior Alyvia Walker, who had been averaging 16 points per game, for the way she helped lead Danville.

“She’s a senior. She’s played in the state. She’s played in a lot of big games. She’s been playing for a really long time and she stepped up tonight,” McWhorter said. “Ivy Turner … I thought we did a really good job on her. Held her to 11, she’s averaging 23 for the year. We did a good job on Turner and got her in trouble, but Alyvia did a good job stepping up and kind of taking over for Danville.”

Kaitlynn Wilks, who led Lincoln with 18 points, pumped in the game’s first two buckets, Maddy Boyle followed with a layup, Logan Godbey nailed a 3-point goal and Emma King, who had 10 points, sank a free throw in the  Patriots’ 10-0 start.

However, Danville was within five points by the end of the first, closing on an 8-3 run. After her opening free throw, Alyvia Walker added two field goals, then Kennedy Walker got a putback and Turner got a free throw toss to make it 13-8.

“I was really, really pleased with how we started the game. I thought we came out and made a statement,” McWhorter said. “I thought we were going to come out and keep that rolling, and about the four-minute mark of the first quarter it was like we just kind of stopped a little bit. They made a couple adjustments and attacked the rim and got a couple shots to go down and did a good job of attacking us. I was very pleased with how we started the game. I just wish we could have kept that going for four quarters.”

Danville edged Lincoln 15-13 in the second quarter, using an 8-1 first half-ending run to trim the Patriots’ lead to 26-23. Alyvia Walker had four of the eight points, Dora Swan sank two free throws and Zenoviah Walker closed the half with a bucket.

King pushed Lincoln’s lead to 29-23 early in the second half, hitting a 3-pointer to start the third quarter. But the Admirals responded to the trey with a 6-0 run to deadlock the game at 29-all. Kennedy Walker nailed a 3-pointer in the run and Turner sank one free throw before Zenoviah Walker drove inside to tie the game with 5:08 left in the third.

Wilks broke the tie with a bucket in the paint then Jenna King sank two free throws for a 33-29 margin. However, Alyvia and Kennedy Walker quickly quieted the Lincoln crowd by sinking back-to-back field goals, including Kennedy’s 3-pointer at the 3:44 mark that gave Danville its first lead of the game, 34-33.

Back-to-back buckets would help Lincoln reclaim the lead before the end of the period. Haley Southerland bombed in a 3-point shot then Wilks hit inside to nose the Patriots ahead 42-40. Lincoln took a 42-41 lead into the final frame with Turner collecting a point at the foul line to close the third quarter.

There were five ties and three lead changes in the fourth quarter. Alyvia Walker, who was 9-for-18 at the foul line, hit two free throws with 3:42 left in the game to break one of those ties and put Danville on top 51-49. Lincoln was back in front 54-53 with 2:28 to go after a Southerland free throw and a Wilks hook shot.

After two more Southerland free throws with 1:16 to go, Lincoln held to a 58-55 lead. However, the Patriots, who finished at just 31 percent from the field on 19-for-61 shooting, 4-for-17 from 3-point range, would not score again.

But Danville’s Zenoviah Walker would. She sank two free throws then followed with a bucket in the paint to put the Ads on top to stay, 59-58. Then, after a Turner free throw toss, Walker collected her final two points of the night at the line to secure the win.

“We knew it was going to be like this,” Menifee said of the battle to the wire. “We got into a little foul trouble pretty much the whole game. Ivy had four, Alyvia had three, Zenoviah had three. But I told the girls, I said, ‘You know what? I’m going to fight for you, now you go out and fight for each other. Don’t worry about me getting a technical (which he did in the second quarter) or what they call … just fight.’ Everybody else could say, ‘Oh, they’re done.’ But no, the girls said, ‘We’re going to dig in and play disciplined and smart.’ And that’s what they did.”

McWhorter felt a few more calls in Lincoln’s favor could have shifted momentum late in the game.

“I thought there were a couple calls that could have gone our way that could have changed the momentum down the stretch,” she said. “I thought Logan (Godbey) got two more charges that she took that weren’t called charges. But the bottom line is, they scored more than us and we didn’t get the ‘W.’ We went to the free-throw line 15 times in the first and second quarters and they went 16 times in the fourth quarter.”

The Patriots did win on the glass, 40-32, led by Jenna King with a game-high 12 rebounds. Danville’s Kennedy Walker made it a double-double night with 10 rebounds to go with her 12 points.

“Kennedy Walker stepped up,” Menifee said. “I mean, she was getting everything that came off that glass. We preach that, as a small team, we’ve got to find a way to box out and be hungry and get to loose rebounds and loose balls. And by God, she got us every single extra possession and she was leaving them to one shot when they missed and allowed us to run the ball and get in a little more uptempo.”