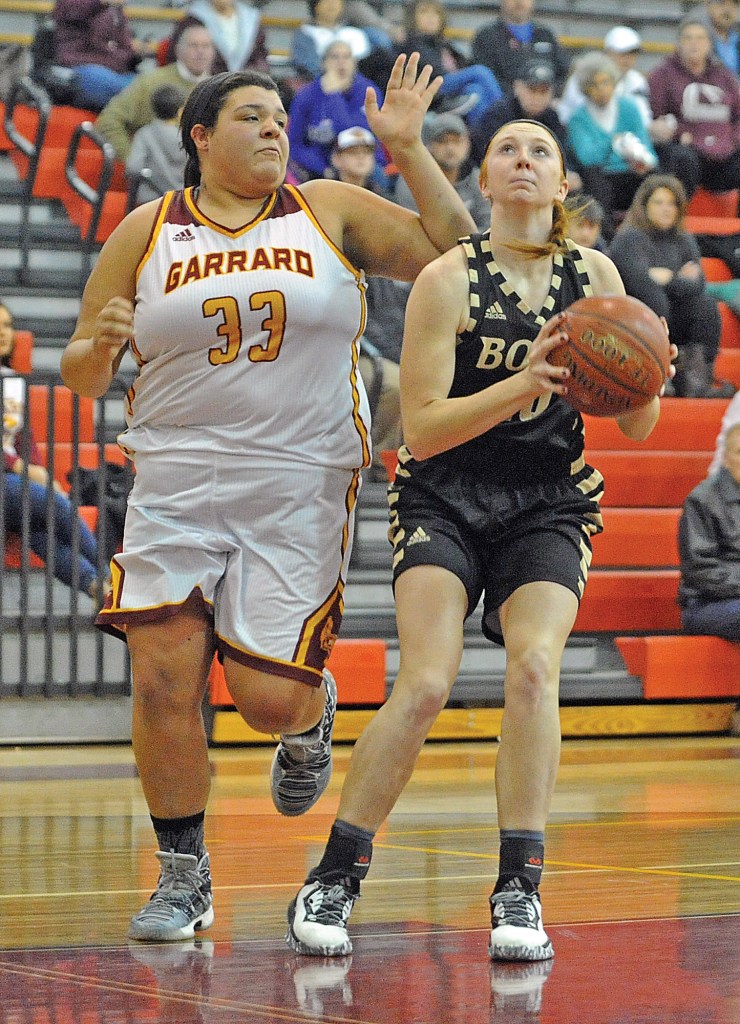 Matt Overing/matthew.overing@amnews.com Boyle County's Emmie Harris (10) goes up for a layup as Garrard County's Sis Logan attempts to block her shot during the second half of Friday's game. Harris scored 15 points to lead the Rebels.

LANCASTER — The girls’ 45th District started with a bang on Friday at Garrard County.

Boyle County and Garrard were back and forth throughout the game, with neither team gaining a double-digit lead throughout. Garrard led by as many as seven points with less than five minutes remaining.

But the Rebels rebounded for a 64-62 win, led by timely shooting and poise at the foul line. The game was tied 62-62 with under a minute to play, and after each team turned it over twice, Boyle found an answer.

Rachel Leath drove from the top of the key to the left side of the paint, drawing Garrard’s Sis Logan off of Becca Tarter in the paint. Leath dished to Tarter, who hit a five-foot jump shot to give the Rebels’ a two-point lead with 4.4 seconds left. Garrard’s inbounds pass didn’t reach its target, and Boyle survived.

“That’s the good thing about our kids, they’ve been in those situations before,” Boyle coach Greg Edwards said. “We didn’t panic. We just kept plugging away, and when we had opportunities to make plays, we made them. That’s what you’ve got to do in games like this. It’s good to get a district win and go from here.”

Edwards said his team’s schedule so far helped prepare them for a close win.

“That’s what playing tough teams gives you,” he said. “It gives girls confidence that they can go out there and make those kind of plays. It was a great pass and a great shot.”

Boyle’s offense had to look for other options than one of the state’s top scorers in Emmie Harris. Garrard made it a point to limit her touches, and in the first half, it worked. The Golden Lions shadowed Harris all game, occasionally with two players. She had just five points at the break and was 1-for-3 from the foul line.

“We’ve been working on a different offense in the last couple of days, kind of thinking we’d see a box and one,” Edwards said. “Coach Parsons, he helped diagram some stuff that we really did a good job with it today. We had some good movement and we got Emmie freed up some. In the second half, we went away from that to do some things that we thought we could exploit.

“But I’ll tell you what, Garrard County is much improved. They start five seniors, they’ve been pointing to this one for awhile. They kept making (3-pointers) tonight, they had some big ones.”

Harris scored 10 points in the second half — including a 7-for-8 mark from the foul line — to lead Boyle with 15 points.

“If you’d have told me we held her to 15 points and lost, I would’ve laughed at you,” Garrard coach Scott Latham said. “We did a tremendous job on her. She deserves a lot of attention because she’s that good of a player. There’s no doubt about it. We wanted to make sure that we knew where she was at all times.”

“It’s not our defense that is our problem, we’re playing excellent defense, we’ve played it all year,” he said. “We just have to quit going through these 2-3 minute stretches where we lose our composure. Tonight, I told them before the game, ‘Expect to win.’ And I don’t think they expect to win yet. Until we fix that mentality, we’re going to struggle. We’re going to keep working and keep battling to get over the hump.”

Garrard, one of the top 3-point shooting teams in the state, continued to hit from outside, going 11-for-18 from range. But a poor mark from the foul line is what Latham pointed to for the loss.

“We shot the ball extremely well, except from where you need to shoot it from,” he said. “We were 10-for-18 from the free throw line. That’s cost us another game tonight. You shoot it 70 percent from where you’re supposed to, you win the ball game. It’s one of those little things that is fixable.

“It makes no sense, we shot the ball 11-for-19 from the 3-point line, better than the free throw line. That’s something you don’t like spending time on, but we’re going to spend a lot of time on the free throw line the next couple of days to get that fixed. That’s a little stat that makes a huge difference in the game.”

Garrard’s guard play was strong all night, with Maddy Day scoring a game-high 16 points. She had three fouls by the second quarter, but Latham rolled the dice and it worked.

“She was smarter and didn’t pick up silly fouls in the second half,” Latham said. “Her third foul was more of a freshman foul than a senior foul.”

Sam Adams didn’t score in the first half for Garrard but knocked down three 3-pointers in the second half en route to 14 points.

“She’s capable of that, and we told her at halftime, ‘If we’re going to win this, we’ve got to have you,’” the coach said. “We did what we needed to do, we had a shot, we didn’t execute at the end of the game. Drew a play on the board and it was nothing like what was drawn up. That’s a mental thing, not paying attention to detail, that we have to fix.”

Boyle’s offense stepped up with Harris being hounded all night. Danielle Roney scored 13 points, McKayla Baker had 11 points and Leath scored 10. Tarter and Gracie Edmiston each had six points.

“We had some other people step up tonight, (Garrard) did a good job on Emmie,” Edwards said. “They made her work for everything she got.

“We always say that we’re looking to get three people in double figures. When you get four, you’re playing pretty good basketball. That’s what we try to do. Our emphasis tonight was to move the ball more, get more people involved. I thought we did that.”