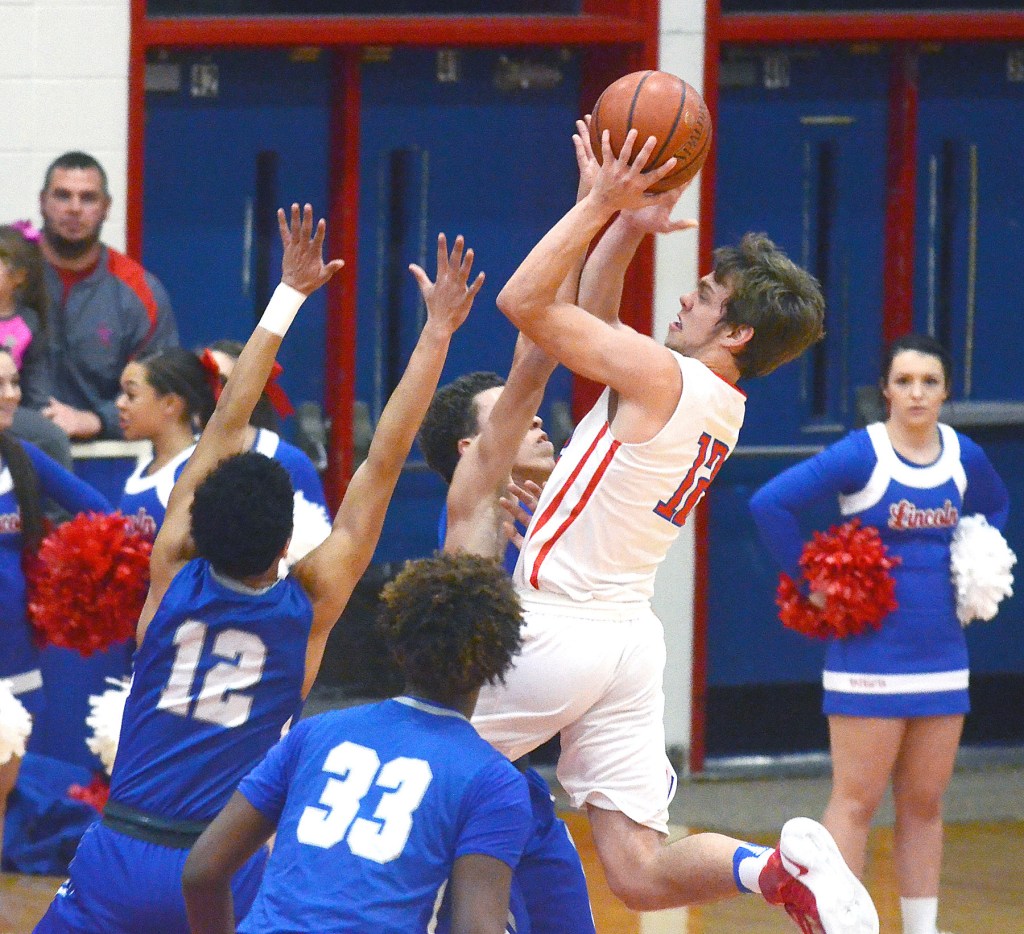 Nancy Leedy/nancy@theinteriorjournal.com Noah Young of Lincoln County shoots for two of his game-high 23 points in Lincoln County's 70-46 win over 45th District rival Danville Friday night. Before tipoff, Young was presented with a game ball to recognize his scoring his 1,000th point during the Gateway Classic at Montgomery County over the holidays.

STANFORD — The Lincoln County boys tipped off their 45th District schedule at home Friday night and came away with a big win, defeating Danville 70-46.

Noah Young led a quartet of double-digit Lincoln scorers, pouring in 23 points on 7-for-15 shooting with four rebounds and six assists. Tanner McAninch scored 19 points on 7-for-9 shooting, 4-for-6 from 3-point range, and had six boards, Chase Phillips went 5-for-6 for 14 points with six rebounds and Devin Alcorn was 3-for-7 for 10 points.

Lincoln, which has been shooting 51.5 percent on average, nailed 59 percent of its shots in Friday’s win, going 24-for-41 from the field, 9-for-16 from 3-point range, while the defense held Danville to 35 percent overall, 17-for-49. The Patriots limited the Admirals to just five points in the third quarter on 2-for-12 shooting as they blew the game wide open.

“I’m real proud of our kids. It was a great way to start the district,” Lincoln coach Jeff Jackson said. “Our focus was real good today in the walk-thru and I thought we came out and played really, really well. Any time you can get a win in the district it’s a good win, and this was a good win.”

Lincoln (11-4, 1-0 45th District) led for all but a few seconds of the game. Phillips hit in the paint for the Patriots to open the night’s scoring only to have David Walker drain a 3-pointer to nose Danville ahead 3-2. However, Carlos Nunez answered inside just 30 seconds later to put Lincoln on top to stay, 4-3.

Lincoln held to its six-point lead at the end of the first, 15-9, then extended its lead to eight, 17-9, with a quarter-opening bucket by Phillips in the second period.

Danville was quickly chipping away at that lead, though. Zach Thornton, who finished with 10 points, ignited a 9-2 Admiral run when he bombed in a 3-pointer. Jared Southerland, who led Danville with 11 points, followed with a bucket in the paint and converted on a three-point play, then Walker added a free throw toss to make it a 19-18 game. Phillips went to the foul line for Lincoln’s two points during the Danville run.

But Danville would get no closer.

McAninch scored off a Nick Noland assist, Alcorn followed with a 3-pointer, Young hit two treys and Blake Smith scored on a putback to push the Patriots’ lead to 32-22 and they took a 34-25 lead into the half.

While happy with his team’s lead at the break, Jackson wasn’t happy about missed shot opportunities.

“We got a little careless with the ball a couple times and didn’t get shots,” he said. “We had some empty possessions in the first half, and again in the second half. You can’t not get shots, especially against a team like Danville. We knew they could come back easily. (A 34-25) lead is nothing, not with 3-point shots.”

But there would be no Danville comeback. Lincoln continued to build on its lead in the third quarter as Danville’s offense hit the deep freeze. The Admirals went without a bucket until the 4:48 mark of the third. Southerland hit from 3 to end the scoring drought then Walker hit with 3.9 seconds showing for the only other Danville bucket.

The Patriots outscored the Admirals 15-5 in the third off 5-for-11 shooting. Alcorn had a 3-pointer and a field goal in the third, Phillips had a layup and a three-point play and McAninch had a four-point play as Lincoln posted a 49-30 lead after three quarters.

Lincoln had its high-point effort in the fourth quarter, knocking down 21 points for the lopsided victory.

“We defended a little better and they missed some shots, too,” Jackson said of Lincoln’s second-half blowout. “We were able to get in transition a little bit and we hit some shots. Tanner hit some shots, Devin hit a big three, Carlos and Blake played well. Everybody did that came in the game. It was just a really good win.”

The Patriots outrebounded the Ads 34-24. Thornton led Danville with seven boards, Tanner Ford and Jaleel Warren each had four. Noland grabbed six boards for Lincoln and Nunez had five.