Rebels’ defense too much for Golden Lions 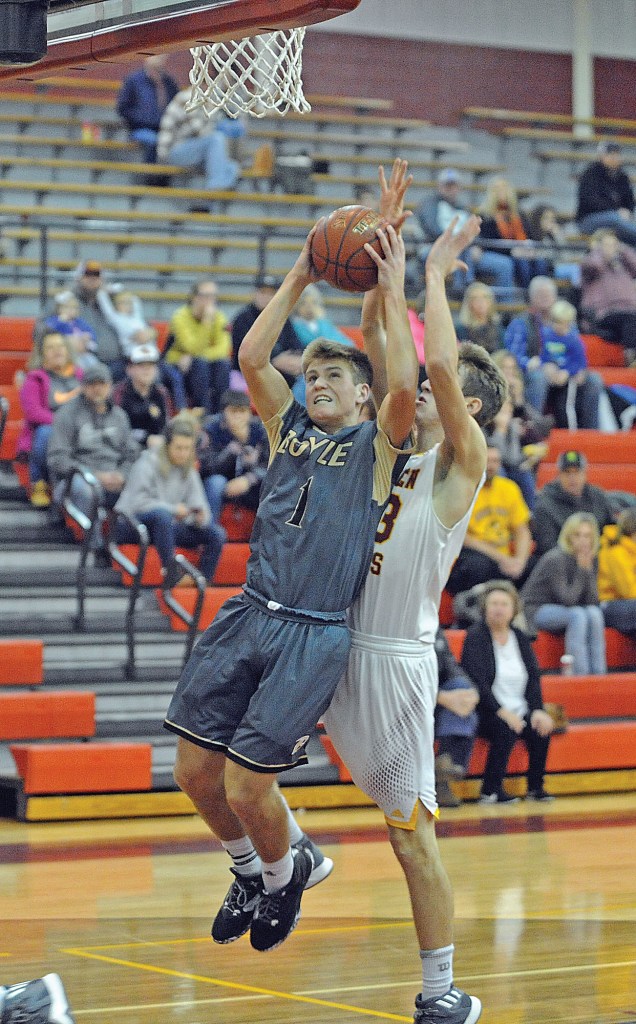 Matt Overing/matthew.overing@amnews.com Reese Smith goes up for a layup as Garrard County's Parker Dailey attempts to block the shot. Smith had 13 points Friday. Dailey had a game-high three blocks.

But the Rebels’ guard play showed up in a big way to give them a 72-54 victory against the Golden Lions.

After Reese Smith and Will Bramel each went out in the second quarter with early foul trouble, Boyle’s backcourt stepped up. Jason Alexander scored 16 points on 6-of-9 shooting, had seven steals and four assists — all game highs. Bryce Slone scored 15 points and pulled down a game-high seven rebounds.

“Part of our inexperience is keeping our mental focus and discipline all the time,” Boyle coach Steve Adams said. “We’ve got a couple with two fouls, I decided to sit them and play some others. I told them at halftime, when you’ve got an opportunity, you’ve got to take advantage. We’ve got to build some depth, we need some people.”

Boyle opened with 19-8 first quarter with its starting five controlling the tempo of the game. But with Smith and Bramel on the bench, Garrard’s offense started to click in the second quarter.

Garrard coach Ryan Young said his team’s weak first quarter and strong second has been par for the course and said they need to find consistency in the backcourt.

“We’ve searched for guard play all year,” Young said. “We’ll get a couple of them to step up, like Justin Preston played really aggressively tonight, probably the best game he’s played all year. I just didn’t see a lot of fight from our guys. I kind of expect that from our younger guys, but that’s where we need some of these older guys to show some leadership, and we did in the second quarter. But it’s been our M.O. all year, first quarter and third quarter slow start. And we’re not talented individually enough to fight back from those things.”

At halftime, Boyle led 33-27 before a 19-6 third quarter put the game out of reach. The Rebels led by as many as 27 points in the fourth quarter before benches were cleared.

Young said he liked where his team was after the first 16 minutes. They had a game plan to slow down Slone, and it worked — he had just two points in the first half. Big man Parker Dailey had multiple Boyle post players in foul trouble and had five points.

“We prepared well, we fought hard on the defensive end,” Young said. “We do an excellent job on Slone in the first half, he only had a bucket. That was our game plan going in, to try to take him out of his flow. I thought we did a pretty good job with that.”

But Boyle’s defense continued to force Garrard’s guards into mistakes. The Golden Lions finished with 21 turnovers.

“On the offensive end, we don’t have strong enough guard play right now to get into anything that we’re trying to run. … The few times we ran our sets, we got Parker the ball inside and got some good looks,” Young said. “Pressure is just our Achilles heel right now, and we’re just working to improve those ball skills, we’re just behind in that area. It just comes to light in games like this.”

Boyle’s guards continued to outwork their opposition in the second half, with Slone scoring 13 points on 4-of-4 shooting in the half. He also went 4-for-4 from the foul line.

Adams turned to his guards, and his guards delivered.

“Matthew Bodner stepped in and did a nice job, Grant Hotchkiss is really coming along,” Adams said. “I thought when we had our main group in and we were focused, we did a pretty good job.”

Defensively, the guards caused problems as well: 14 of Garrard’s 21 turnovers were steals.

“I like it, it’s about time,” Adams said. “We’ve really been concentrating on being more active defensively in practice and trying to get some of our weaknesses, things we haven’t been doing well, get those things cleaned up a little bit.”

Young said he wants his team to continue to fight and find a belief in themselves, otherwise the district games will continue to be a struggle.

“The thing with our guys, and the thing that we’re fighting in this whole program, and we’ve kind of fought it since I’ve been here as an assistant and it’s so hard to change, is that when we walk out of the locker room right now, we’re still not convinced that we’re good enough to win these types of ball games,” Young said. “And I was worried going in, because for a lot of our guys and the roles that they’re playing, this is by far the biggest atmosphere they’ve played in, it’s Boyle County.

“I have a lot of respect for that program, coach Adams gave me my start in coaching four or five years ago. They’re going to play hard and do what they do, and if you hand them turnovers and easy buckets, it’s just not going to be a good night.”

Adams said his team needs to continue to work on their mental focus as the schedule shifts to area opponents. It was there for the guards tonight, but not always there on defense.

“Now, we’re in the part of our schedule where it’s region teams, district teams, not always top 25 teams,” he said. “Now, we really need to work on the mental aspect of the game and start taking care of the ball better. For the most part, I thought we did a much better job.”