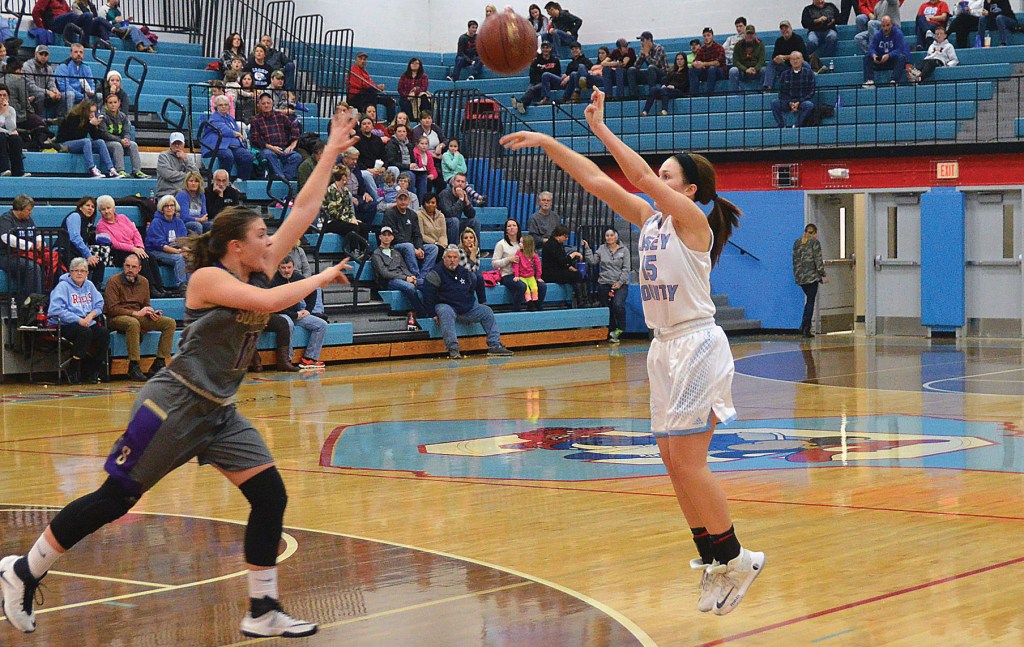 Jeremy Schneider/jeremy.schneider@amnews.com Casey County's Myla McGowan shoots for one of her two made 3-pointers in Friday's win over Somerset. The Rebels exited the weekend with a 15-3 record.

1. The Casey County girls are for real. So it probably didn’t need to take 18 games to figure that out, but last week proved these Rebels aren’t going anywhere. They racked up three more wins — a five-point win over Marion County, a 13-point win in district play over Somerset, and then capped off the week with an 80-49 thrashing of Metcalfe County on Saturday.

What makes Casey so dangerous is its balance. Last week, the Rebels had two players average double figures in Gena Cravens (25 ppg) and Lauren Lee (12.3 ppg) while two others, Myla McGowan and Natalie Duggins, averaged at least eight points and both scored in double figures in two games.

“Whenever we prepare for a team, they’ll have one or two big-time scorers so you know who you have to defend,” first-year Casey coach Tara Weddle said after the 54-41 win over Somerset. “In our games, sometimes (Lee) will have 20-some points or (Duggins) will have 20-some points. It fluxuates. Some games, four of them may have double digits. It makes it nice to have multiple people who can score because it makes us harder to defend.”

In case they have anymore doubters, the Rebels have two more chances this week to sway some opinions, traveling to Whitley County on Tuesday and Rockcastle County on Friday.

The real fun, though, starts later this season when they face Boyle County, Mercer County, Holmes, Danville and Lincoln County in the final 10 days of the regular season. Talk about getting tournament tested.

2. Swimming is on the upswing in the area. With so much attention paid to the hardcourt this time of the year, it’s easy to overlook what’s happening in area pools. And that would be a mistake because both Boyle County and Danville are having tremendous seasons this year.

In last Wednesday’s meet at Shelby County, the Rebels and Admirals swept the top two spots in the combined team race, with Boyle claiming the crown. The girls came down to one point separating Danville and Boyle, and the Rebels ran away with the boys team title.

3. The Boyle County boys look to be figuring some things out. It’d be easy to look at the Rebels 7-8 record and figure they’re building for next year. But take a closer look and you’d find games against five top-25 teams, with wins over Louisville Eastern and Knox County Central.

True, this team has had to rebuild on the fly, with only Jason Alexander and Bryce Slone returning with any real varsity experience. And with 1-1 record last week — a nine-point loss to 12th Region favorite Pulaski County and a demolition of Garrard County in the 45th District opener — the needle could be edging up for the Rebels.

Alexander and Slone certainly are leading the way for Boyle — Slone put up 20 points and 7.5 rebounds per game last week while Alexander added 15.5 points on 12-of-17 shooting — but they’ve been joined by Reese Smith, who averaged 17 points and 4.5 rebounds last week.

The old saying would have you believe Rebels coach Steve Adams “didn’t do his team any favors” with such a tough schedule. Actually, just the opposite is appearing to be true.